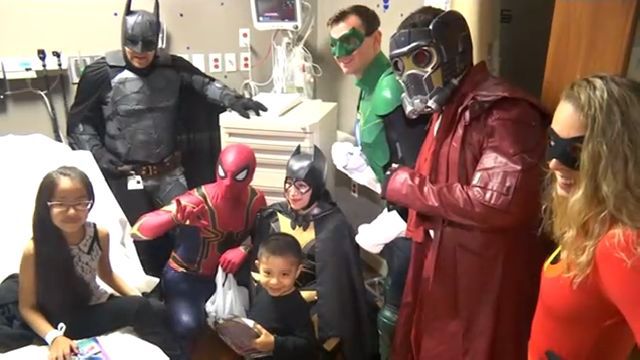 Humble Heroes lift kids and parents up during difficult times

These superheroes are joining forces not to battle evil but to make sick children smile.

They call themselves the Humble Heroes.

Ex-marine Frank Recce, and his firefighter and police officer friends started the group two years ago.

"We had an affinity for dressing up for Halloween in kinda different costumes and decided to put it to good use," said Humble Heroes Co-founder Frank Recce.

Their first outing was to a grief camp on Staten Island for children who lost a parent or sibling.

But now it has grown into monthly visits to hospitals and other childrens’ camps around the city.

"Our mission as Humble Heroes is to spread the joy and entertain these kids that are having the hardest time," Recce said.

Doing so by suiting up as the generations most popular superheroes, but their disguises can't be picked up at a Halloween shop.

Military Veteran and former NYPD officer Kenny Restrepo, who also goes by Batman, makes most of their costumes by hand.

"We come in looking legitimately like superheroes because kids are our biggest critics, I mean they will call anybodys bluff, like I see zippers, oh I see hair, I see skin so we have to be as legitimate as possible," Restrepo said.

Making it a memorable experience not just for the kids but the doctors, nurses and other staff, too.

All while also providing some relief to childrens' parents.

"Parents are run down so when they see us they're almost happier. They take pictures with us and say 'Hey look! Look who it is!' They remember growing up seeing us, seeing the costumed guys as their heroes as well," Restrepo said.

Even the heroes admit, the visits can get difficult from time to time.

But the super powers of the children they spend time with prove that they are the true heroes.

"You've seen things before but nothing every really pales in comparison to seeing a kid in that type of state, so it can be kind of tough, but I think wearing the mask kinda hides the emotions a little bit and it just reminds you that gotta step up and do what you got to do to bring a smile to a kids face," Recce said.

And so for helping children around the city fight their biggest villains, the volunteers at Humble Heroes are our New Yorkers of the Week.