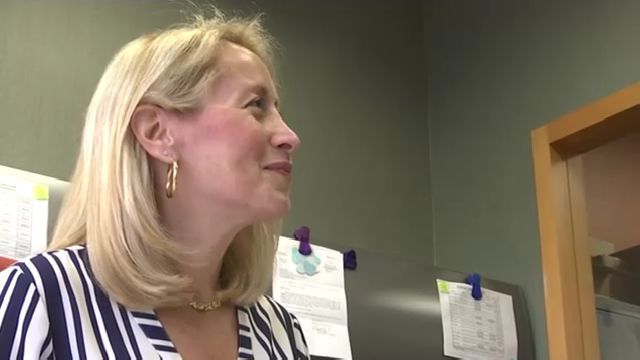 And her brother, an NYPD officer in the 6th precinct, died on September 11th as he tried to rescue people trapped in the World Trade Center’s North Tower.

"I know about struggle. Growing up, it was...my family and I, through tragedies, had a difficult life," Henick said.

But you wouldn't know it, because it seems everywhere the Staten Island native goes, she's never without her bright smile.

She says it's because of those struggles, she's able to appreciate all life has to offer.

"It's a very humbling feeling when people reach out to you and help you when you're at you're most vulnerable," Henick said.

And now she's paying it forward.

Henick is the Director of Administration for the self-storage company "Stop and Stor."

And she's also in charge of its charitable fund.

Henick has handed out more than $3 million since 2002 to different causes across the globe.

From disaster relief efforts, to collecting eye glasses for those who can't afford them, to cancer fundraisers.

Henick has given checks to hundreds of charities.

One is "Michael's Cause."

It's a Staten Island non-profit that raises money and awareness about the fatal disease Duchenne Muscular Dystrophy.

"She's always been there for us as far as, not only on a support level, but in every way imaginable. She's really helped us get through every day," said Robert Capolongo, founder of Michael's Cause.

Henick recently was given an award by the Staten Island Chamber of Commerce for her work in the community.

She says she couldn't be more proud to give back especially to her home borough.

"Staten Island is where my heart is. I am so happy I am in this position to really help other people," Henick said.

And so for helping countless charities continue their missions, Denise Henick is our New Yorker of the Week.