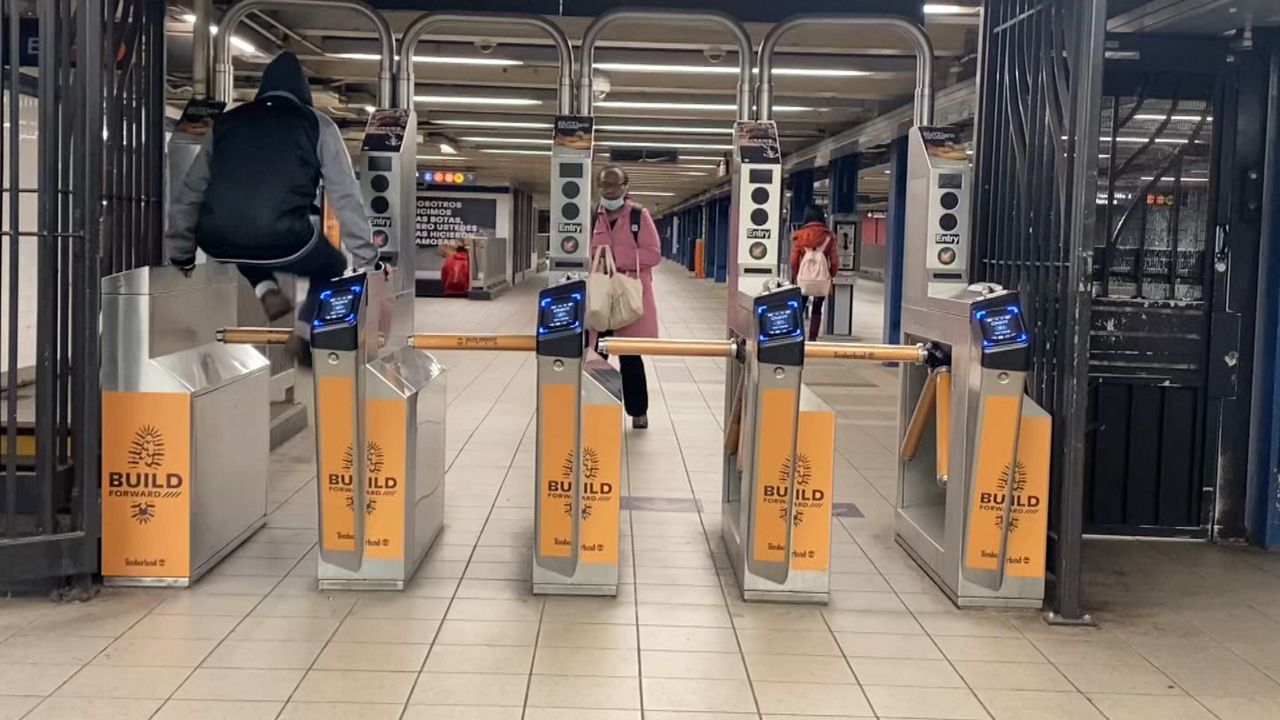 Are the subways getting more dangerous?

This question — and the ways that politicians, agency officials and experts have responded to it — has been a major theme of life in the five boroughs over the past year as the city attempts to bring subway traffic back to pre-pandemic levels.

Several things stand in the way of that goal: the continued influence of work-from-home culture, the proliferation of alternative transportation and decreased tourism.

But politicians have repeatedly focused on combating crime in the transit system, as well as the perception that the trains and buses are unsafe, as the key to renewing trust in the city as a whole.

“The goal was to be omnipresent. It was to deal with the actual six felonies a day we were experiencing, but how people were feeling also,” Mayor Eric Adams told reporters Monday about his plan to improve subway safety. “We must deal with the feeling that people were having.”

But legal experts, social services providers and transit advocates have criticized efforts to flood the transit system with police patrols. They say that crime in the subway, and concerns about public safety tied to the presence on trains and platforms of people experiencing homelessness and mental illness, are downstream effects from systemic problems with housing and health care — and should be responded to that way.

“The police are not the tool to deal with every problem in transit,” said Danny Pearlstein, the policy and communications director for the nonprofit Riders Alliance. “Just in the same way that the police can't make the trains more reliable or frequent, they also can’t provide housing or health care.”

This week, new data on crime in the transit system has painted a complicated picture.

Felonies are up about 40% compared to last year — even as arrests, especially for low-level offenses like fare evasion, have jumped. Incidents like rape and murder are up slightly compared with 2021, while hate crimes — a major focus of concern for everyday riders — are down slightly. Hate crimes against Asian riders are down from 29 through October 2021 to 17 through October 2022.

Arrests and summonses are also up by about 50% compared with 2021.

Yet crime is down slightly, so far, compared with 2019, when ridership was much higher: Through October of 2022, the NYPD recorded 1,917 major felonies. In the same period of 2019, the total was 2,000, according to NYPD statistics provided to the MTA.

“Way, way, way too early to declare victory,” Janno Lieber, the chairman of the MTA, said on Inside City Hall on Monday. “But there is a positive trend, and we’re going to keep pushing.”

Speaking on Mornings On 1 on Monday, Police Commissioner Keechant Sewell credited the increased level of patrols in the system, as well as reminders from train conductors that police are patrolling certain platforms, with deterring crime.

Sewell, like Adams, has pointed to mental illness in discussing sources of subway crime, saying it contributes “to some of the randomness we see.”

“We understand that they need help,” Sewell said. “But they can’t be allowed to victimize people in the subway system.”

On Tuesday, Adams announced that emergency responders, including police, EMS and firefighters, would be allowed to involuntarily hospitalize people they consider to be experiencing mental illness in public spaces, including subways.

“If a police officer is on the train at an express stop, and he looks out the car as the train moves forward and he sees someone laying on the platform, he's gonna call,” Adams said in announcing the policy shift. “No more days of, ‘You know what, I’m gonna act like I didn't see that.’”

Determining how many people arrested for crimes in the transit system who are experiencing or have a history of mental illness is difficult – because police arrest forms do not often collect information about a person’s psychiatric state or housing situation, according to Jacquelyn Simone, the policy director for the Coalition for the Homeless.

But, Simone said,Adams and Sewell are unfairly scapegoating mentally ill and unhoused people for subway crime, noting that they are more likely to be victims of crime themselves.

“I think that the mayor is working against the goal of getting people back on the trains to say that these people are dangerous, and it's just a matter of time before they push someone onto the tracks,” Simone said.

Critics of the administration’s approach to subway safety have also questioned its efforts to increase policing of low level offenses.

Lieber argued that policing quality-of-life issues helps restore confidence in the safety of the overall system.

“In the subway, small things like smoking on trains, open drug use, that is alarming to people, because they wonder, ‘What might that person do to me in a closed subway car?’” Lieber said on Inside City Hall.

Instead of issuing those people summonses, said Molly Griffard, a staff attorney with the Legal Aid Society, the administration should focus instead on upstream solutions. For example, she said, instead of fining people for skipping subway fares, they should expand the city’s affordable subway fare program.

“That's really a crime of poverty, and something that doesn't hurt others,” Griffard said.

Griffard and others question the use of city resources on a policing-first approach to improving safety in the subways. In October, Adams and Gov. Kathy Hochul announced that they would be expanding police patrols to include 1,200 additional daily overtime shifts, at a cost of nearly $500,000 a day.

“Imagine what else our city could be doing with that money to invest in smarter community safety solutions,” Griffard said. “Flooding the subway with police is a short term, band-aid solution that doesn't actually make us safer.”