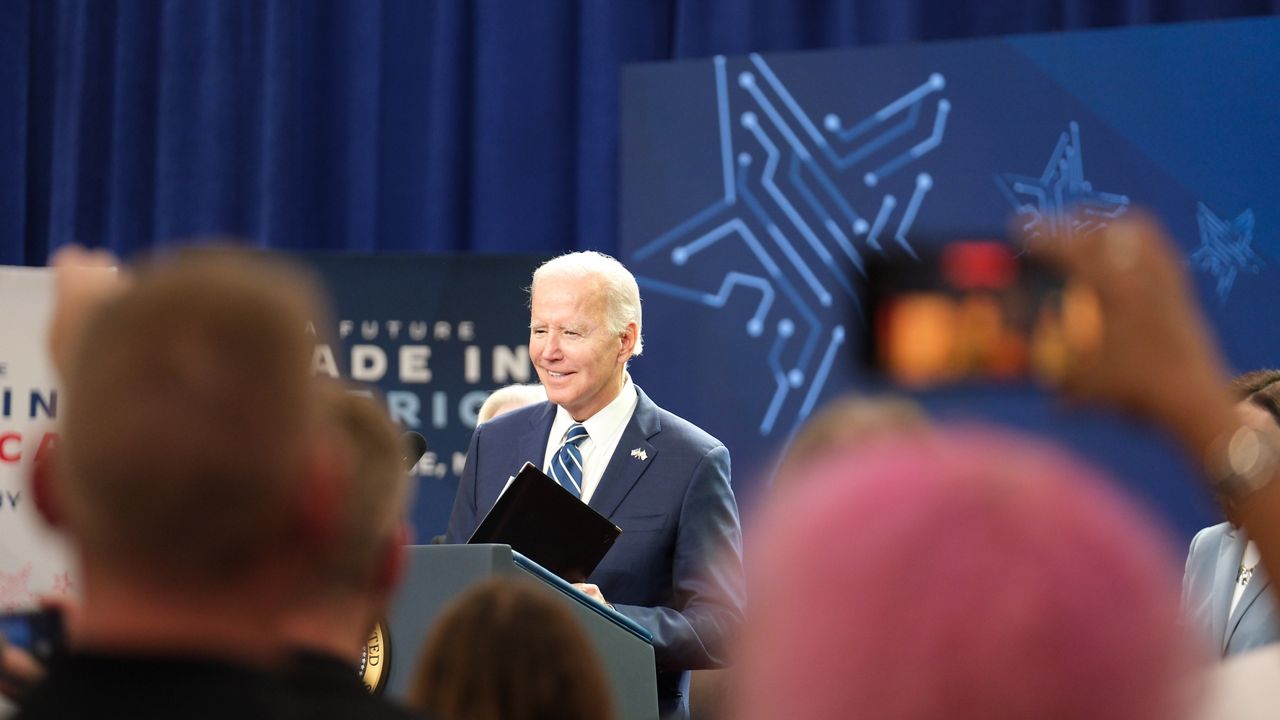 'We're back in the game': Biden visits Syracuse to spotlight first investments around $100B chip plant

Micron announced earlier this year its plans to build the mega fabrication facility, or fab, in White Pine Commerce Park in the town of Clay, bringing tens of thousands of jobs to New York and up to 9,000 high-paying jobs within the company.

Biden on Thursday spoke at Onondaga Community College about the investment, calling it "one of the most signficant investments in American history."

"It's going to ensure that the future is made in America," he said. "It should give us a sense of optimism and hope about who we are as a nation, and it's part of a broader story about an economy we're building -- one that works for everyone."

The president said it puts the United States "in a position to win the economic competition in the 21st century."

The president also pointed to 2.6% economic growth in the U.S. economy during the last quarter, despite persisting concerns about a recession and criticism from Republicans about record-high inflation under his watch.

"For a lot of families, things are still tough. But there's some bright spots out there where America is reasserting itself," he said, adding of the Micron investment and others: "I hope you feel what I feel standing here today: pride. Pride in what we can do when we do it together."

The president’s trip comes less than two weeks before the midterm elections.

He's continued to highlight his efforts to uplift domestic manufacturing, especially around critical semiconductor chips that power things like cars, phones and electronics. The CHIPS and Science Act he signed earlier this year invests $50 billion in the industry and has led to billions in announcements like Micron's.

"Making these chips in America is going to help lower the cost for families looking to buy a car, to replace your washing machine, get a new cell phone. It also helps companies out-compete the rest of the world," the president said.

"And I've heard from Xi Jinping that he's a little concerned about that," he ribbed about China's president. "We're back in the game."

According to a White House official, Micron and the State of New York will establish a $500 million fund to strengthen the surrounding community, investing $10 million in local educational institutions and another $10 million in local small businesses that power the semiconductor supply chain.

The trip was the president's second time in upstate New York this month related to new investments in semiconductor chips, in the wake of his signing the bipartisan CHIPS and Science Act, which sets aside grants for the industry.

Biden on Thursday was joined by Senate Majority Leader Chuck Schumer and Sen. Kirsten Gillibrand, along with Republican Rep. John Katko, crossed party lines to back the CHIPS and Science Act.

"John is a Republican and I like him a lot," Biden said of Katko, who is retiring at the end of this term, praising his willingness to work across the aisle. "I'm quite frankly a little sorry you're leaving."

He praised New York's congressional delegation as "one of the best" in the country.

IBM, based in Poughkeepsie, is investing $20 billion over the next decade to become a global hub for semiconductor chip and quantum computer manufacturing.

Micron Technology Inc. plans to build four 600,000-square-foot “clean rooms,” on the New York site. It will be roughly 40 football fields in size — making it one of the largest construction projects in North America with construction spending of $31 billion and 5,600 related construction jobs, according to Gov. Hochul’s office.