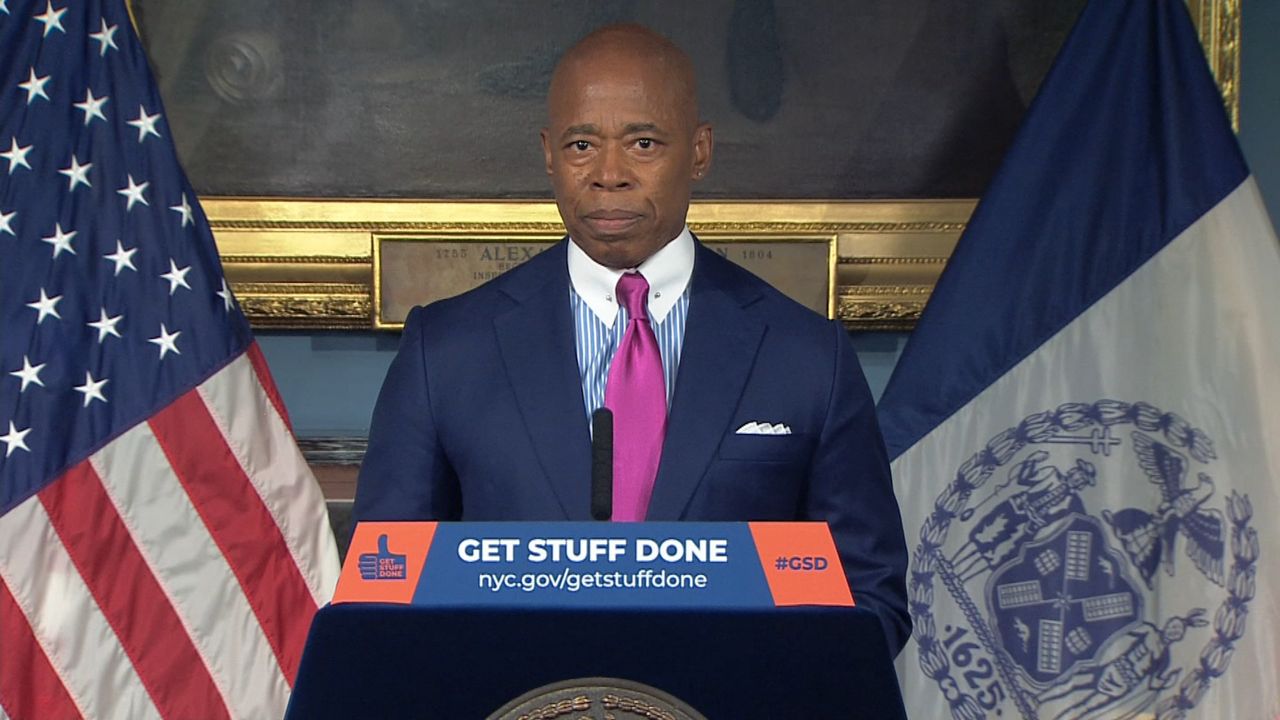 Mayor Eric Adams on Friday implored federal and state officials to help address the continued arrival of asylum seekers in the five boroughs, declaring the influx a “state of emergency” set to cost the city more than $1 billion.

More than 17,000 asylum seekers have arrived in the city since April, most of whom are “adults who cannot legally work in this country,” Adams said at a news conference Friday morning.

Officials expect to spend “at least a billion by the end of the fiscal year on this crisis,” the mayor said.

“The asylum seekers arriving here need more than a hot meal or a bed for a night. Without the ability to work legally in this country, they need long-term shelter, health care, and a great deal of institutional support,” he said. “It is straining the limits of our ability to provide care for New Yorkers in need, and it is burning through our city’s budget.”

Adams called on the federal government to enact legislation allowing asylum seekers to “legally work — now, not in six months.” He also urged Congress and the state Legislature to provide emergency funds, calling the situation an “all-hands-on-deck moment.”

“New York City is doing our part, and now others must step up and join us,” he said. “We need a coordinated effort to move asylum seekers to other cities in this country to ensure everyone is doing their part.”

"Our right-to-shelter laws, our social services, and our values are being exploited by others for political gain," he added. "New Yorkers are angry. I am angry too."

Responding to Adams’ emergency declaration on Twitter Friday afternoon, Texas Gov. Greg Abbott — who first announced that he had sent a group of migrants to New York City by bus in August — said he would continue to transport asylum seekers to other states.

“Sanctuary cities like New York City experience a FRACTION of what Texas border communities face every day,” Abbott tweeted. “We’ll continue busing migrants to NYC, DC, & Chicago to relieve our overwhelmed border towns until Biden does his job to secure the border.”

We'll continue busing migrants to NYC, DC, & Chicago to relieve our overwhelmed border towns until Biden does his job to secure the border.https://t.co/fVNuf6nLAm

At a subsequent news conference Adams held Friday, Mayor’s Office of Immigrant Affairs Commissioner Manuel Castro said approximately one-third of the migrants arriving in the city so far had hoped to go elsewhere.

“The largest population of Venezuelans in the country are in Florida, and that’s where most people indicate they wish to be,” Castro said. Officials are working to ensure asylum seekers get to their intended destinations, he added.

While the city has already transformed 42 hotels into emergency shelters to address the crisis — with plans to open a “humanitarian relief center” on Randall’s Island in the coming weeks — those efforts will not meet the growing demand for housing and resources for migrants, Adams said.

“Our shelter system is now operating near 100% capacity. And if these trends continue, we’ll be over 100,000 in the year to come,” he said. “That’s far more than the system was ever designed to handle.”

The Randall’s Island center, for its part, will be “full in days” unless the city takes “immediate action,” the mayor said. The city initially planned to set up its first relief center in Orchard Beach, but opted to move the site to Randall’s Island instead, with Adams citing flooding concerns and cost effectiveness as factors influencing the decision.

As part of Adams’ emergency declaration, the city’s “relevant agencies” will work together to build the additional relief centers officials previously announced, he said. The emergency declaration will suspend “certain land use requirements to expedite this process,” he noted.

The city will also try to find "better, faster ways to get people into permanent housing," Adams said, but added that "years of delays have kept new low-income housing from being built."

“New York City has already done more than nearly any other city to support this influx of asylum seekers,” he said. “And we cannot deprive longtime New Yorkers of support and services, even as we address the needs of these new arrivals.”

In a joint statement released Friday afternoon, the Legal Aid Society and the Coalition for the Homeless said they “agree[d] with Mayor Adams that Washington and Albany need to meet the moment with urgency and additional support,” but took issue with some of the mayor’s remarks.

Adams on Friday morning declared the crisis “not of our own making” — a claim the two groups disputed.

“All levels of government have a legal and moral duty to care for these individuals and families who have endured so much trauma already. However, the reason that the shelter census is at an all-time high is not solely because of an influx of asylum seekers,” they wrote. “It is the city’s historic shameful failure to adequately invest in affordable housing that has continued to fuel mass homelessness.”

“It was heartening to hear that City Hall will soon announce measures to more quickly transition homeless New Yorkers from shelters to permanent housing,” the groups added, but noted that they still opposed Adams’ plan to open large-scale relief centers to address the crisis.

“Lastly, we reaffirm our call on the city to abandon its plan to construct tent cities, and to instead focus on high-quality indoor shelter options and permanent housing,” they said.

In a statement, a Department of Homeland Security spokesperson said the agency would "continue to work with our regional partners to manage the new migration challenge caused by failing authoritarian regimes," adding that they were "leading a comprehensive effort to support cities that are welcoming the asylum seekers that some Republican governors are using as political pawns."

"We will continue to do everything we can to support cities as some Republican governors intentionally create chaos and confusion with their cruel political stunts," the spokesperson wrote.