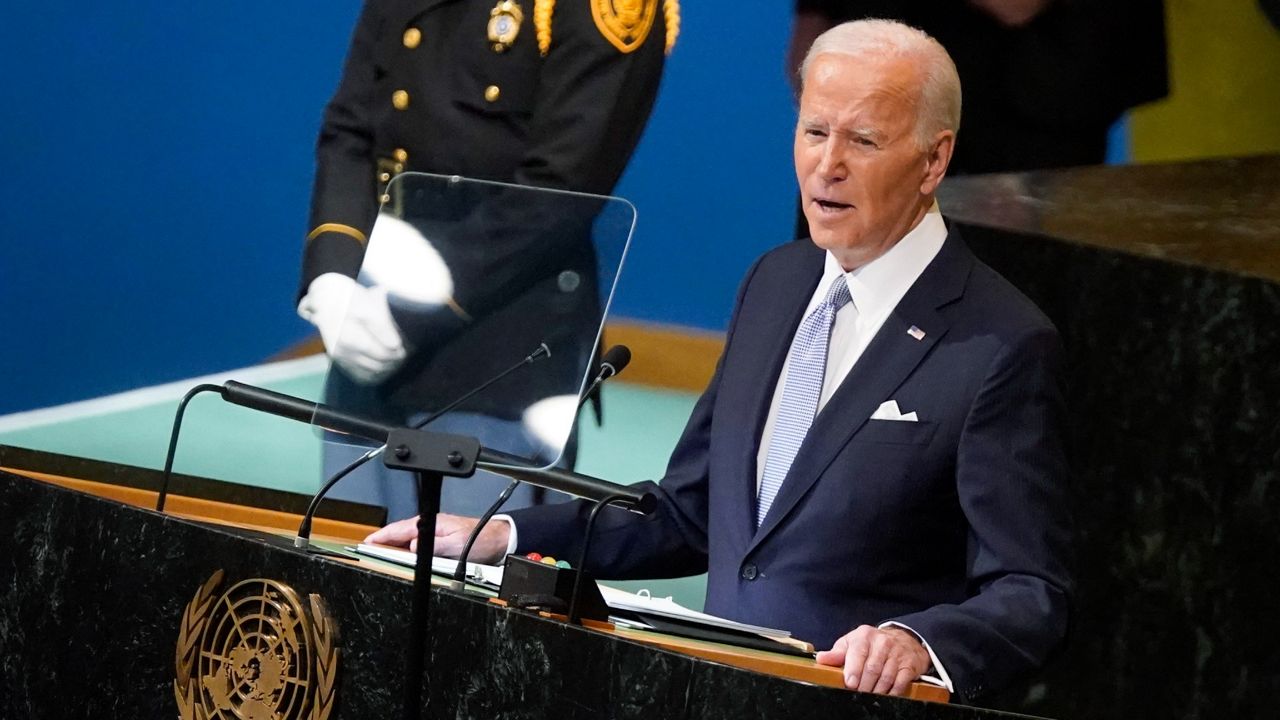 Biden at U.N.: Russia's assault on Ukraine 'should make your blood run cold'

President Joe Biden on Wednesday delivered a full-throated condemnation of Russia's invasion of Ukraine, blasting it as an affront to the United Nations’ charter and calling for the world to continue standing together against Russian President Vladimir Putin’s aggression.

Biden's speech came hours after Putin ordered a partial mobilization of reservist forces and made a veiled reference to potential use of nuclear weapons.

"To those who allow themselves such statements regarding Russia, I want to remind you that our country also has various means of destruction," Putin said. "And when the territorial integrity of our country is threatened, to protect Russia and our people, we will certainly use all the means at our disposal.

He said it is a “war chosen by one man, to be very blunt,” referring to Putin.

Biden touted the United States’ economic support of Ukraine — more than $25 billion to date — as well as the U.S. coordinating with allies to impose sanctions on Moscow.

The president said if countries such as Russia “can pursue their imperial ambitions without consequences, then we put at risk everything this very institution stands for.”

Biden proposed changes within the U.N. He said members of the Security Council should only use their veto power in “rare, extraordinary situations to ensure the council remains credible and effective.” In the early days of the war, Russia vetoed a Security Council resolution denouncing its invasion of Ukraine.

Biden also said the U.S. is committed to the expansion of both permanent and nonpermanent members to the council, adding he supports permanent seats countries in Africa, Latin America and the Caribbean.

The president addressed several other topics in his address, including climate change, global health, world hunger, China and nuclear weapons.

“In every country in the world, no matter what else divides us, if parents cannot feed their children, nothing else matters,” Biden said.

The head of the United Nations’ World Food Program said last week that 345 million people are facing acute food insecurity, with 70 million pushed closer to starvation by the war in Ukraine.

Biden defended sanctions imposed on Russia, which Moscow has blamed for food shortages.

“Our sanctions explicitly allow Russia the ability to export food and fertilizer, no limitation,” Biden said. “It's Russia's war that is worsening food insecurity, and only Russia can end it.”

On climate change, Biden noted that the U.S. has rejoined the Paris Agreement aimed at limiting global warming and that he recently signed legislation committing $369 billion toward combatting climate change.

He said the United States has delivered more than 620 million doses of COVID-19 vaccines to countries around the world and spearheaded a new fund at the World Bank to help countries prevent, prepare for and respond to pandemics.

The president touted the Indo-Pacific Economic Framework for Prosperity, an initiative that aims to promote fair trade between its members, make supply chains more resilient, address climate change and root out corruption.

He said the U.S. does not seek conflict or a cold war with China, but it will “be unabashed in promoting our vision of a free, open, secure and prosperous world.”

Biden vowed again to “not allow Iran to acquire a nuclear weapon.”

The president urged every nation to recommit to strengthening the Treaty on the Non-Proliferation of Nuclear Weapons.

Biden said world leaders are facing great challenges today and that their commitment to address them must be greater.

“We're not passive witnesses to history,” he said. “We are the authors of history. We can do this. We have to do it for ourselves and for our future for humankind.”