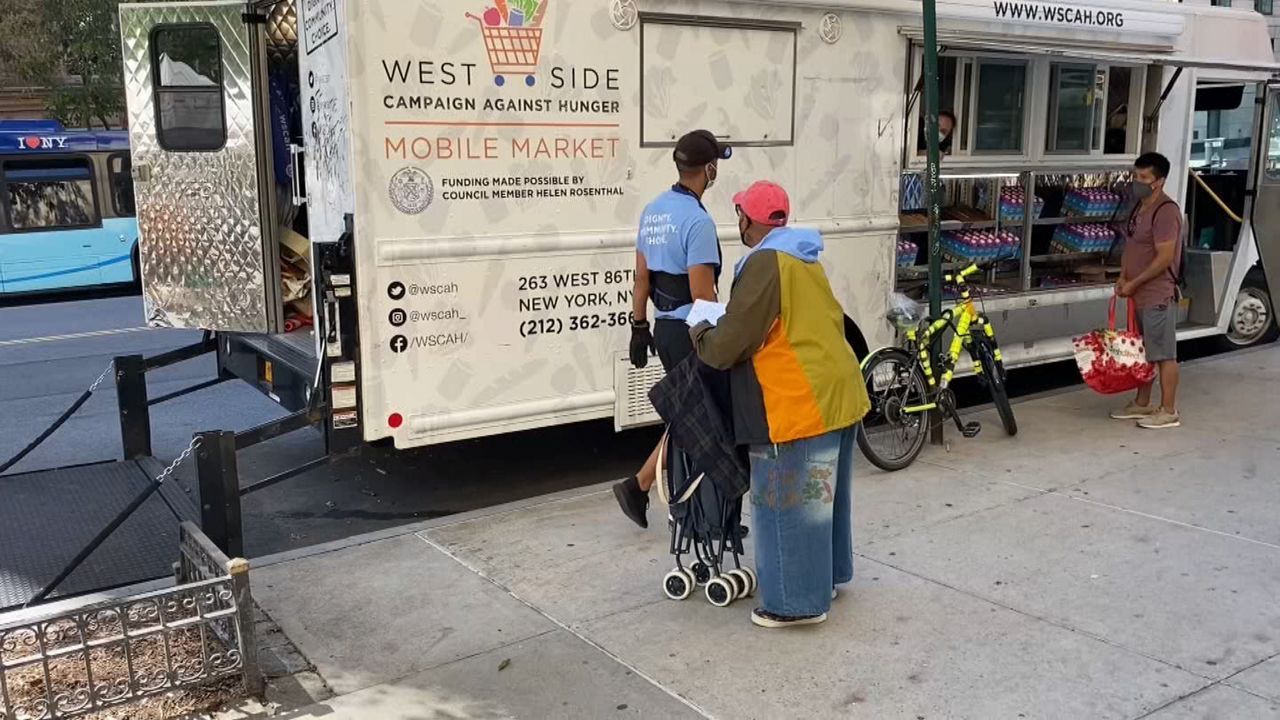 A mobile market with the West Side Campaign Against Hunger serves clients in Manhattan on Sept. 15, 2022. (NY1 Photo)

At 7 a.m., staffers and volunteers at West Side Campaign Against Hunger prepare for the day’s food distribution. With a steady flow of people arriving, the line is around the side of the building, even though distribution is two hours away.

Parrilla is 70 years old, living on a fixed income. She’s been coming to this food distribution location for about a year now.

“The pandemic taught me something, primarily live within ones means and that’s what I’ve been able to do but what falls by the wayside all the time is food,” said Parrilla.

Throughout the city, food distribution centers have seen increases in their clientele.

City Harvest has reported visits to its food pantries and soup kitchens up 69% compared to before the pandemic. At the West Side Campaign Against Hunger – which serves about 75,000 people a year – over the last few months, this particular location on West 86th Street has seen a 42% increase in foot traffic.

According to the Bureau of Labor Statistics’ July Consumer Price Index, the cost of food rose 10.9% with cost of groceries rising 13.1%.

“We’re seeing the kind of inflation now that we really haven’t seen in over 40 years so a lot of people haven’t really experienced this kind of price change in their lifestyle,” said Steve Reed, and economist with the consumer price index, Bureau of Labor Statistics.

Reed says the last time the nation has seen increases like this was back in 1979.

“A lot of people would hope that it’s going to slow down soon and it has the increases have slowed down a bit but we haven’t gotten to food prices actually coming back down,” he continued.

In the last few months, distribution centers like this one said they’ve noted more new immigrants in need of resources, stemming from a steady stream of migrants being sent on buses from the state of Texas.

“We’re getting an influx in families from the border especially from central America, a lot of these families are crossing the border and coming to states like New York where there’s a lot of programs and opportunities to help them,” said  Diana Tamacas, coordinator with West Side Campaign Against Hunger.

Parrilla and other regulars said they want to see more action from city leaders.

“I don’t know if it’s policy or whether or not ignoring but I feel uncomfortable knowing there’s not a wide variety of places and spaces for people to go to,” said Parrilla.