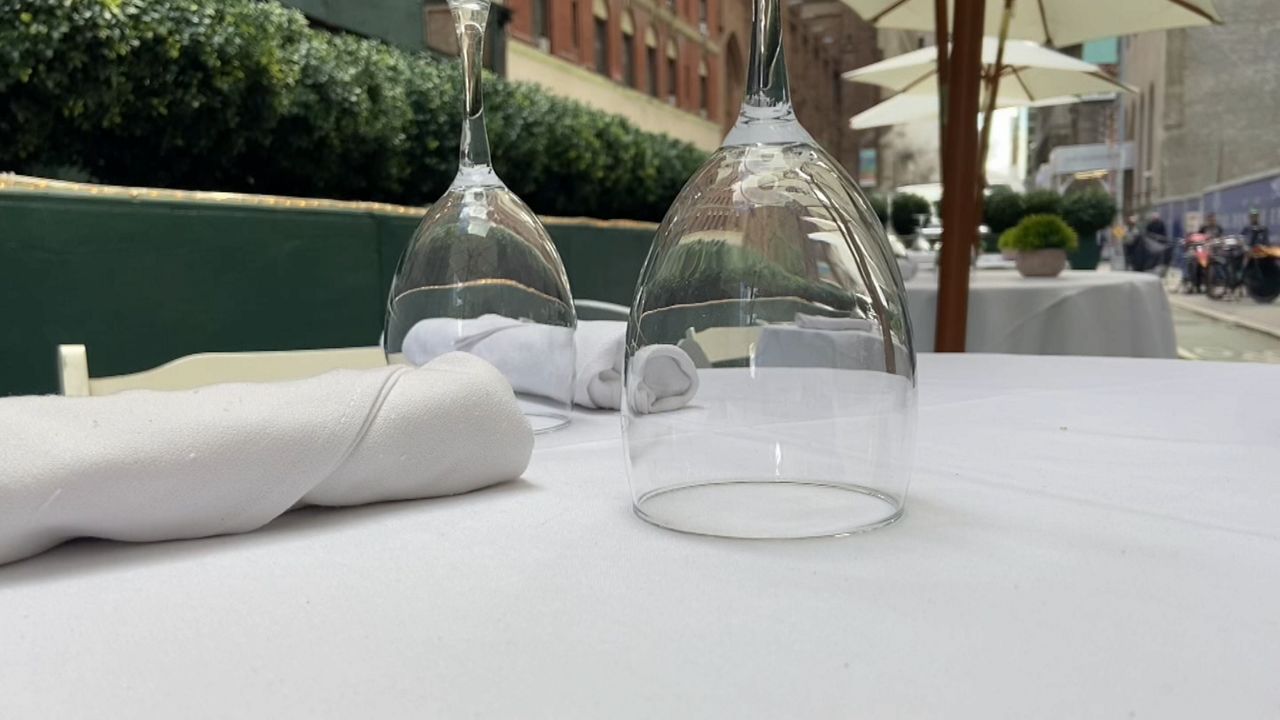 Restaurants are still waiting for guidance on what its outdoor dining program will look like. Litigation has stalled the city moving forward with a permanent arrangement. (Spectrum News NY1)

With colder months ahead, restaurants seek guidance for outdoor dining

Restaurants are still waiting for guidance on what the outdoor restaurants program will look like.

Litigation has stalled the city moving forward with a permanent arrangement.

As the city waits for the lawsuit to be resolved, the city has increased its enforcement of the emergency pandemic program.

“There needs to be certain laws and rules that we should follow as a restaurant and business in the city,” said Michael’s restaurant manager Steve Millington.

Millington said outdoor dining had greatly helped businesses like his which are still struggling from the pandemic.

To keep the program going and successful, he said he agrees there should be tighter oversight.

The city has pledged to cite and take down problem outdoor dining spaces.

Since Mayor Eric Adams announced tighter oversight in August, more than 60 sheds have been taken down.

The process can take weeks before a structure is disassembled because the city must reach out to the business before it takes further action.

“We wish they would have done it sooner,” said Executive Director of NYC Hospitality Alliance Andrew Rigie.

Rigie said he’s also waiting for city guidance on what outdoor dining will look like.

The reason why the program is in limbo is because a group of residents sued the city claiming the sheds hurt their communities and have led to excessive noise, traffic congestion, less parking, garbage piled up on streets and with that, more rodents.

“We have to remember, they built these structures when they had no money in the midst of a crisis,” Rigie said.

The temporary program expires when the permanent program takes effect, according to the Department of Transportation.

Yet, as the COVID crisis winds down, many restaurants have gone out of business and left their sheds abandoned.

The Department of Transportation runs the program, but it's not just that agency's job to tackle the thousands of potential shuttered sheds. Rigie said the problem extends to how the city handles its trash.

“What do you think is going to happen if residents and restaurants put garbage bags on the sidewalk in the heat, in the rain, in the snow? It’s going to attract vermin,” Rigie said.

About 12,000 restaurants, which are part of the program, are waiting for final guidance from the city.

Some businesses don’t know whether they should invest in their structures as colder months approach or keep them as they are.

“The allowance of an outdoor space would be wonderful if done properly. We don’t want garbage piled up for people. We don’t want to be a nuisance for our pedestrians or our bikers for that matter,” Millington said.

For problem sheds, the city asks people to file a complaint with 311.

Editor’s Note: A previous version of this story incorrectly stated the outdoor restaurants program expires at the end of the year.