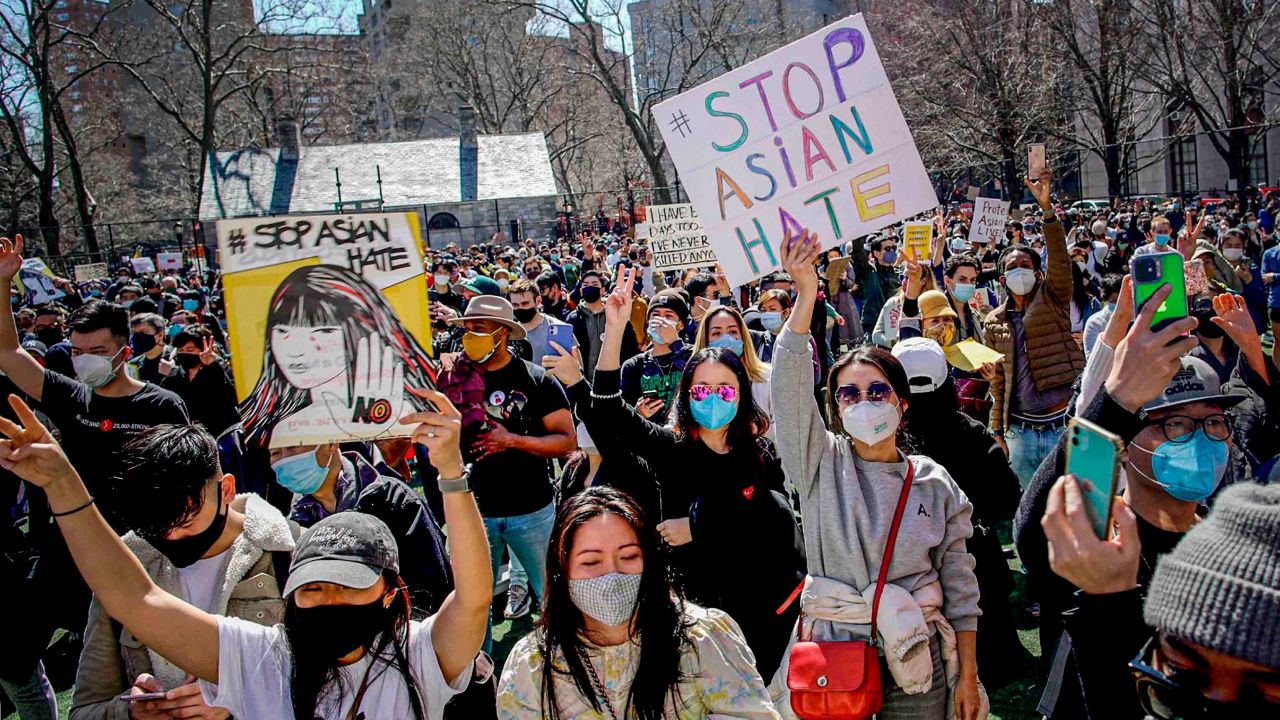 This file photo shows people at a rally against hate and violence against Asians living in the United States in Columbus Park in the Chinatown section of the Manhattan, N.Y. (AP Photo/Eduardo Munoz Alvarez, File)

Since the beginning of the pandemic, New York City hate crimes have been on a steady rise. Already this year, they are up nearly 16% year to date over 2021, according to NYPD data.

In an effort to stop the kind of attacks that have left minority communities across the city on edge, the city’s most recent budget invests a record $1.7 million in the Manhattan district attorney’s Hate Crimes Unit.

Officials say the money is necessary to support outreach and to hire staff to do the extensive research required to prosecute hate crimes cases.

The hate crimes docket is at an all-time high for the DA’s office, at 99 cases, according to officials. That number reflects the current number of open cases, meaning it includes cases initiated this year or in a previous year.

“We’re in a historic moment and we want to meet the need that we're seeing certainly for this office,” Manhattan District Attorney Alvin Bragg said in an interview.

Although hate crimes have increased citywide over the past two years, Manhattan has seen some of the highest numbers of hate crimes citywide.

The borough includes Times Square and Chinatown, neighborhoods within two of the NYPD’s busiest precincts for hate crime incidents against the AAPI community — the 14th and 5th Precincts, respectively — according to the study.

Officials say the community fallout from a hate crime can have much larger ramifications than other crimes.

The trial division of the DA’s office includes several hundred prosecutors who handle all types of cases. But the goal is to carve out a unit within the division of about 20 assistant district attorneys specifically trained in handling hate crimes cases, officials said.

The resources to build out the investigative capacity is also key to handling this type of crime, which Bragg says can require a more rigorous investigative process than most other types of crimes, which don’t require proof of bias.

It means combing through social media to see if the perpetrator has espoused any hate-filled statements online or to see if they have any affiliations with hate groups.

“If someone doesn't say something at the scene, which shows their mode of [thinking], [we’re] going into their social media, their email history, their posts, and so having sufficient staffing, to do that rigorous review—the approach that we’re having [is] sort of an inclusive one,” Bragg said.

It means having enough analysts to do this research and utilizing assistant district attorneys to bring forward subpoenas. It also means relying on community groups to do outreach, he said.

The office relies heavily on its Witness Aid Services Unit and Community Partnerships Unit to provide educational programming, counseling services, referrals to immigration assistance, and more. These types of services are offered to victims in general, but the office is looking to fill in some key gaps when it comes to victims of hate crimes.

For instance, the office currently has no Asian American Pacific Islander counselor who can speak Mandarin, Cantonese or Korean. They’re looking to fill that role, as well as an AAPI advocate position, which would connect victims to resources such as safety planning, language support or immigration resources.

“The funding really allows us to do the work that we're doing, but at a much broader level and at a much more impactful level,” Yu said.

Officials say prosecuting these cases can be difficult when victims don’t feel comfortable coming forward after incidents happen whether that’s because of unfamiliarity with the reporting process or distrust among law enforcement.

Earlier this year, Mayor Eric Adams made staffing changes at the top of the NYPD’s Hate Crimes Task Force, calling it a “routine shuffling.”

He later expressed his dissatisfaction with how the unit was handling hate crimes cases.

“I thought we were too slow in designating, investigating something as a potential hate crime, and I wanted to make sure someone was in charge of the unit who understood my vision,” Adams said at a February news conference.

Advocates for the Asian American Pacific Islander community, who have faced the brunt of the uptick in hate crimes throughout the pandemic, say that building this trust within communities is key to tackling the issue.

“The initial reaction for anybody is always to go to NYPD,” Jo-Ann Yoo, executive director of the Asian American Federation, said. “And then sometimes NYPD says it's not a hate crime. They make that assumption so then people get discouraged from reporting it.”

That was the case for Esther Lee, who was assaulted on the subway and called a “carrier,” a reference to COVID-19, by another passenger. She immediately reported the incident, but felt that the NYPD was dismissive of her case.

The new funding includes expanded training for the NYPD by the DA’s office in recognizing and handling hate crimes.

While advocates like Yoo say there is a lot of work to be done in terms of building trust among the community, these ramped-up efforts are a step in the right direction.

“If we can all work together to keep the information flowing so we know what is happening, we can keep our community apprised — we can all respond and help law enforcement to respond timely and appropriately,” Yoo isad. “I think that's a huge step in calming all of this down.”