The Army Corps of Engineers proposed an option of building a storm surge barrier that would span the waterway between Brooklyn and Staten Island, just north of the Verrazzano-Narrows Bridge. (AP/Mark Lennihan)

The U.S. Army Corps of Engineers quietly announced earlier this month that it favors a plan to build several small flood gates at the mouths of New York City waterways to prevent storm surges from inundating urban areas — instead of constructing massive barriers that would span the Narrows waterway or the mouth to the area’s entire harbor.

One of those proposals was a nearly seven-mile, $35.6 billion barrier that would run from Breezy Point, in the Rockaways, to Sandy Hook, at the very top of New Jersey’s shoreline. Another proposal would have seen a gate constructed across much of the waterway separating Staten Island and Brooklyn, set just north of the Verrazzano-Narrows Bridge, for a price tag of $8.5 billion.

While the recommendation is not final, and a full report from the Corps is not due until next summer, environmental and resiliency advocates say the proposal would likely have fewer impacts on the area’s waterways, and would allow for incorporating waterfront parks into shoreline areas.

“It’s a huge win for the environment,” said Amy Chester, the managing director of Rebuild By Design, a climate resiliency consulting firm. “It creates opportunities to create infrastructure that benefits the community. Whereas the Narrows [barrier] would have turned back time on our ecosystem.”

The Corps said that it “tentatively selected” an alternative from its 2019 report called 3B, which would replace the massive barriers with smaller gates at the mouths of the Gowanus Canal, the Newtown Creek, Flushing Creek, the Bronx River and Kill Van Kull. The plan also suggests putting a gate across the entrance to Jamaica Bay, which also featured in the alternative that included the barrier across the Narrows.

The 3B alternative also proposes to beef up storm surge protection at shoreline areas, including in East Harlem, Chelsea and the West Village in Manhattan; Long Island City and Astoria in Queens; and farther up the Hudson River in Yonkers, Tarrytown and Ossining.

The gates would close ahead of major storms with large predicted swells of ocean water, preventing tides from pushing onto streets. One design style put forward by the Corps copies a Dutch gate called the Maeslantkering, which resembles two cones, anchored on either side of Nieuwe Canal in the Netherlands, that swing out and close at the center of the canal. 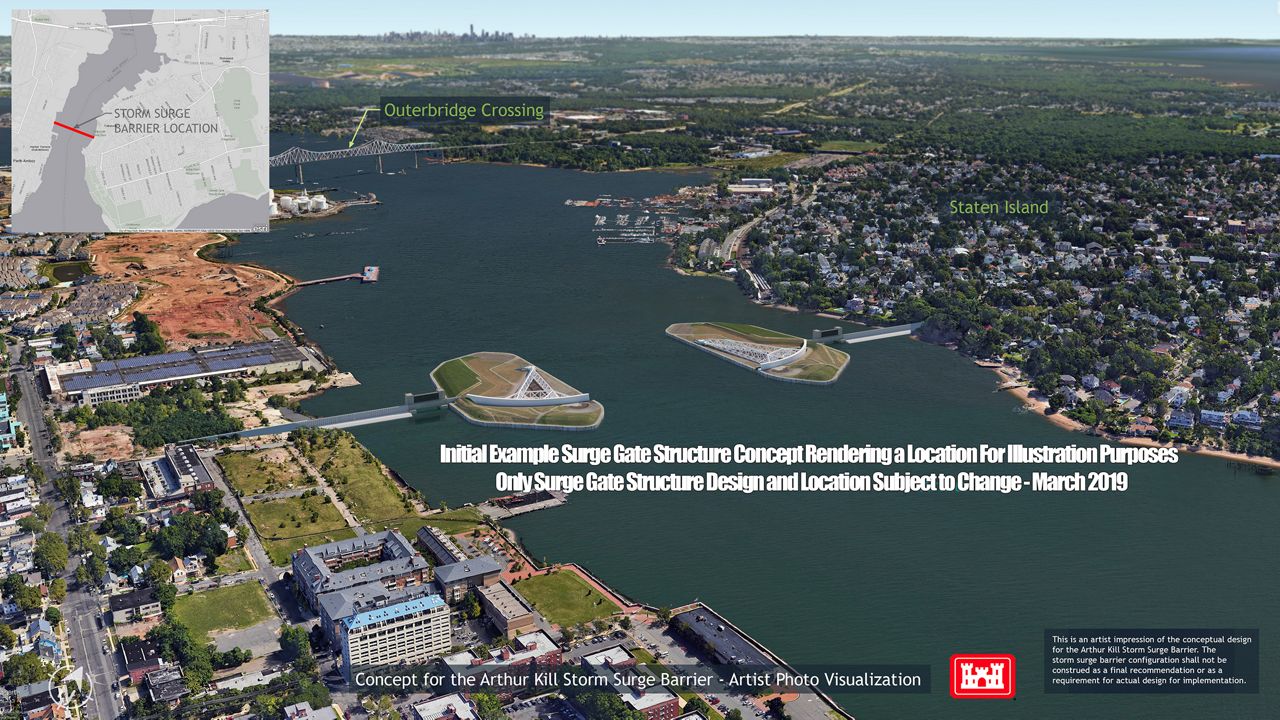 A simulation image from the Army Corps of Engineers shows a proposed design for a storm gate near the mouth of the Arthur Kill, which separates Staten Island and New Jersey. (Credit: USACE)

The Corps projected that 3B would cost $43 billion — $4 billion less than creating the barrier across the narrows, and about a third of the cost of the plan to create a barrier across the mouth of the harbor. The cost burden would be shared partly by the federal government, New York, New Jersey and New York City.

“Ultimately, the ONLY alternative that USACE will NOT recommend is Alternative 1 – the ‘No Action’ alternative,” the Corps wrote in announcing its preference for the 3B plan. “The existing and future coastal storm risk facing this vital study area is too serious and concerning to do nothing more.”

The Corps is now set to release a full draft report in September.

In an emailed statement, Michael Embrich, the New York public affairs officer for the Corps, said that the Corps released its preference ahead of the draft report "for transparency and to ensure the announcement of the selection was made as broadly and fairly as possible to all interested parties."

The Corps’ proposals for large barriers to stop storm surges were met with skepticism and scrutiny from engineers, climatologists and environmental advocates. Scientific studies have predicted strong impacts on the water flow in the harbor, especially as rising sea levels into the century would require closing the gates more often for longer periods of time.

The effects of the barriers could have cascading effects on marine wildlife, researchers have said, and would have come as the waterways around New York City are the cleanest they’ve been in generations, recently serving as a draw to large numbers of whales.

The city has not commented on its position on the Corps’ plan.

In a statement, Rohit Aggarwala, the city’s Chief Climate Officer, said: “We welcome the Army Corps’ progress on this important project and we look forward to reviewing their report and working collaboratively with them, our partners at New York State and New Jersey, elected officials, and the public, to ensure the final recommendation reflects the needs of all New Yorkers.”