When Tahira Askari got on a crowded U.S. plane out of Kabul last year with a single backpack of her belongings, it was the first time in her life she saw what an Afghanistan under Taliban control could look like.

“It was chaos,” she said through translation from her uncle, Bahroz Mohmand, an interpreter who served alongside U.S. soldiers in Afghanistan.

At 17, she’d only heard about life under their rule, knowing that she, as a young woman, would face the worst of their crackdown.

Now safe in North Carolina with the help of her uncle, who became an American citizen because of his service, Askari knows she can’t return home. But her path to stay in the U.S. with the rest of her family isn’t guaranteed.

“I have the same fear [as] when I got out of Afghanistan,” she said through Mohmand.

Like 77,000 other Afghans who escaped last August, she was granted humanitarian parole, a temporary status that will expire in one year. Currently, her only option to stay is to apply for asylum, a program backlogged by about 400,000 applications that typically takes years to complete.

“We don't know what our future is going to be,” Mohmand translated. “Are we going to stay here? Are we going to get a green card? Do we get, you know, accepted here to be a permanent resident, or we're going to be sent back?” 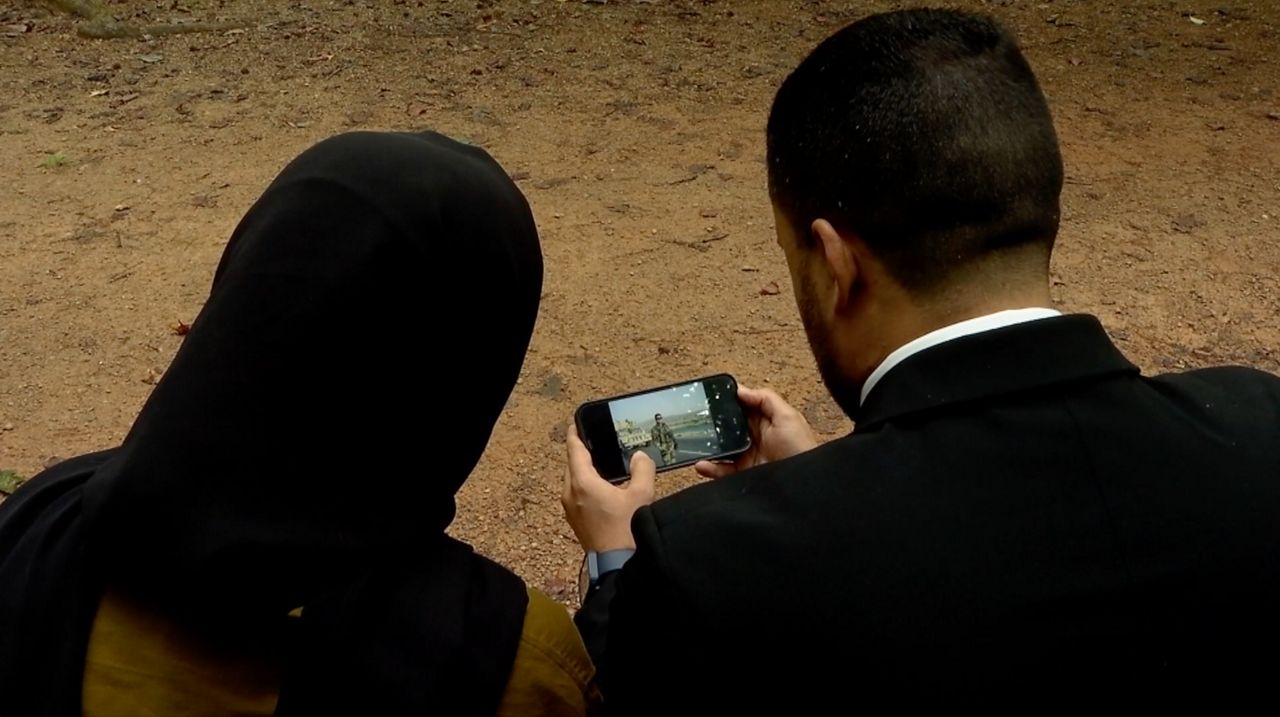 Bahroz Mohmand shows his niece, Tahira Askari, pictures of his time working as an interpreter with the U.S. military in Afghanistan. He helped Askari escape the country during the chaotic U.S. withdrawal last August.

That uncertainty is why a group of bipartisan lawmakers introduced an Afghan Adjustment Act this month – legislation that would create a vetting process and a pathway to residency for the tens of thousands of Afghans who were evacuated by the U.S. one year ago.

Advocates have been pushing for such a bill since last year, but it only recently got Republicans to sign on with their support.

“The time is long overdue. This is a problem that's been growing ever since before that tragic evacuation from Afghanistan unfolded,” said Rep. Seth Moulton, D-Mass., a co-sponsor of the House version of the bill.

Moulton said the legislation was “originally derailed by Republicans who are basically anti-immigrant.”

The AAA includes additional, “rigorous” vetting for Afghans, noted the GOP senators co-sponsoring the bill. Roughly half of the 77,000 Afghans in limbo are people who helped the United States during the war or their family members, a spokesperson for the Department of Homeland Security confirmed to Spectrum News.

Existing in the U.S. without permanent status is mentally draining for Afghans already traumatized by the chaotic American withdrawal last year, said Rebekah Niblock, who represents 17-year-old Askari as an attorney at the Charlotte Center for Legal Advocacy.

Plus, it’s a roadblock to applying to a job or college, or getting in-state tuition, for example.

“Your life is kind of day by day,” Niblock told Spectrum News.

Niblock is putting together an asylum application for Askari, and she continues to encourage Afghan clients to apply for asylum or temporary protected status (TPS) in the meantime.

Afghan evacuees are supposed to get their asylum applications expedited, per a congressional mandate last year.

But Niblock says her other clients’ applications have been languishing for upwards of six years – and that’s with an attorney’s help.

“There are limited resources for folks who don’t have legal status,” she explained. “It's hard to even find an attorney. A free, or pro bono or a low bono attorney is even harder to come by.”

An Afghan Adjustment Act would set up a more defined system for the tens of thousands of Afghans in limbo, she explained, so that “then legal help can come in” to aid Afghans more efficiently.

Still, even a bipartisan-supported bill like the AAA faces an uphill battle to passage, and the timeline is murky.

“We're working as hard as we can, but frankly, we've been working on this for months, and we haven't gotten it to budge,” said Moulton. “So I don't want to make any promises.”

There is precedent for an Afghan Adjustment Act, advocates have noted. Similar bills were passed to secure status in 1966 for Cubans who left their home country after the revolution, and later in 1977 for Vietnamese evacuees.

Askari said she is hopeful, and her dream is to become a journalist, something that she sees is possible in the United States — far away from the Taliban’s oppression of women back in Afghanistan.

“If you wanted to do or accomplish something, you can do it,” she said through her uncle’s translation.