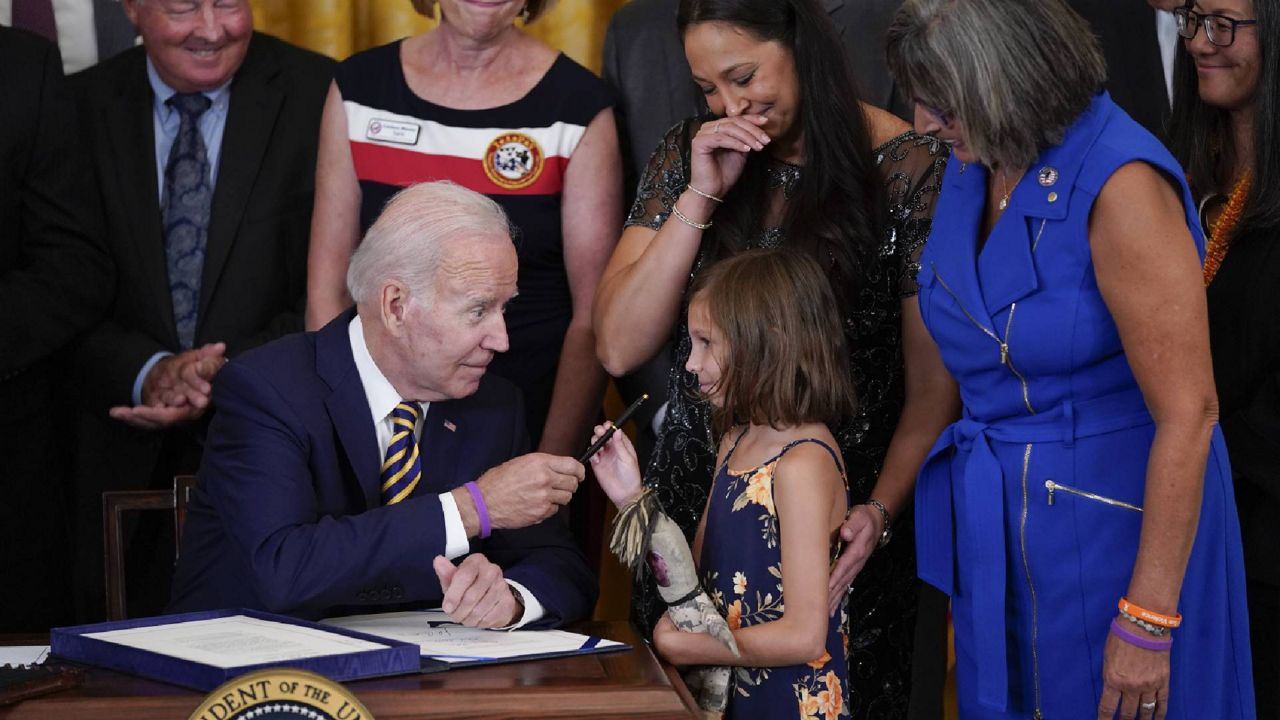 President Joe Biden gives the pen he used to sign the "PACT Act of 2022" to Brielle Robinson, daughter of Sgt. 1st Class Heath Robinson, who died of cancer two years ago, during a ceremony in the East Room of the White House, Wednesday, Aug. 10, 2022, in Washington. (AP Photo/Evan Vucci)

President Joe Biden on Wednesday signed into law a bipartisan bill that will expand health care for millions of veterans exposed to toxins while serving overseas.

The $280 billion bill, known in full as the Sergeant First Class Heath Robinson Honoring our Promise to Address Comprehensive Toxics (PACT) Act, would greatly expand eligibility for free medical care through the Department of Veterans Affairs for veterans who have been exposed to toxic chemicals.

According to the Senate Veterans Affairs Committee, over the last two decades, around 3.5 million post-9/11 combat veterans may have been exposed to dangerous chemicals while in the line of duty. Burn pits were used in Iraq and Afghanistan to dispose of chemicals, cans, tires, plastics, medical equipment and human waste. However, 70% of disability claims involving exposure to the pits were denied by the Department of Veterans Affairs.

Biden called veterans and their families the "backbone" of the country and the PACT Act the "most significant law our nation has ever passed" to help veterans exposed to toxins.

"We have many obligations, but only one truly sacred obligation: to equip those we send in a harm's way and to care for them and their families when they come home," he said. "Today we're one step closer to fulfilling that sacred obligation with the bill I'm about to sign into law."

Upon signing the bill, Biden handed the pen he used to the daughter of Sergeant Robinson, whom the bill is named for. Robinson died in 2020 of stage four lung cancer.

"As a military spouse, when your loved one returns home safely from a deployment, you count your blessings," Robinson's widow, Danielle, said at the White House on Wednesday, with nine-year-old Brielle by her side. "But 10 years post deployment from Iraq, my husband Heath began the biggest battle of his life."

For President Biden, the issue is also a personal one: His son Beau, a major in the Delaware Army National Guard, died in 2015 from an aggressive glioblastoma. While the president has been careful to not directly link Beau's possible exposure to burn pits to his cancer, he believes it's possible there's a connection.

"When they came home, many of the fittest and best warriors that we sent to war were not the same. Headaches, numbness, dizziness, cancer. My son Beau was one of them," he said Wednesday.

"As commander-in-chief I'll always have your back. I promise you," the president said. "It includes always fighting for the care and benefits you more than earned and more than deserve. This law is long overdue, and we finally got it done together."

Veterans can now immediately begin to file claims or learn about the new benefits at va.gov/PACT.

"We encourage anyone who might be eligible for PACT Act benefits to apply right away, because we will stop at nothing to make sure every veteran, every family member and every survivor gets everything they've earned and they deserve," said Veterans Affairs Secretary Denis McDonough on Wednesday.

The bill would expand VA health care eligibility for veterans potentially exposed to toxins, including by extending the period of enrollment for post-9/11 combat veterans from 5-10 years, making it easier for veterans to qualify for VA services by codifying the process by which the agency evaluates exposure and links to military service and removing the burden of proof for nearly two dozen medical conditions, including respiratory-related ailments and several forms of cancer.

Montana Sen. Jon Tester, chair of the Senate Committee on Veterans’ Affairs, credited the president with providing the momentum to get the bill passed – and said that his son played a role in that push.

“He was continually pushing. Because whether Beau died of this or not, I think Joe thinks that it had some impact, and so he wanted this fixed,” Tester said. "And because he thinks it was the right thing to do."

The White House called the legislation the most significant expansion of benefits for veterans exposed to toxins in more than three decades.

Despite bipartisan support, the bill's passage was never certain.

Last month, Senate Republicans blocked a procedural motion to advance the bill despite supporting a previous version of the measure in June, creating an uproar in Washington. Republicans, led by retiring Pennsylvania Sen. Pat Toomey, wanted to change the way the bill was funded, making it go through the appropriations process instead of mandatory spending.

Veterans and advocates demonstrated outside of the U.S. Capitol for days, with Democrats accusing Republicans of objecting because of the Inflation Reduction Act, a party-line climate change, health care and tax bill.

“Republicans haven't met a war they won't sign up for, and they haven't met a veteran they won't screw over,” said comedian and activist Jon Stewart, standing side-by-side with lawmakers, veterans and advocates at a press conference last month. “If this is America first then America is f******”

Days later, the bill ultimately passed in an 86-11 vote, with the unanimous support of Democrats and the backing of a large group of Republicans.

Biden on Wednesday thanked Stewart for his tireless advocacy.

"Jon, I want to thank you again," the president siad, adding: What you've done, Jon, matters. And you know it does. You should know. It really, really matters. You refused to let anybody forget. Refused to let them forget."