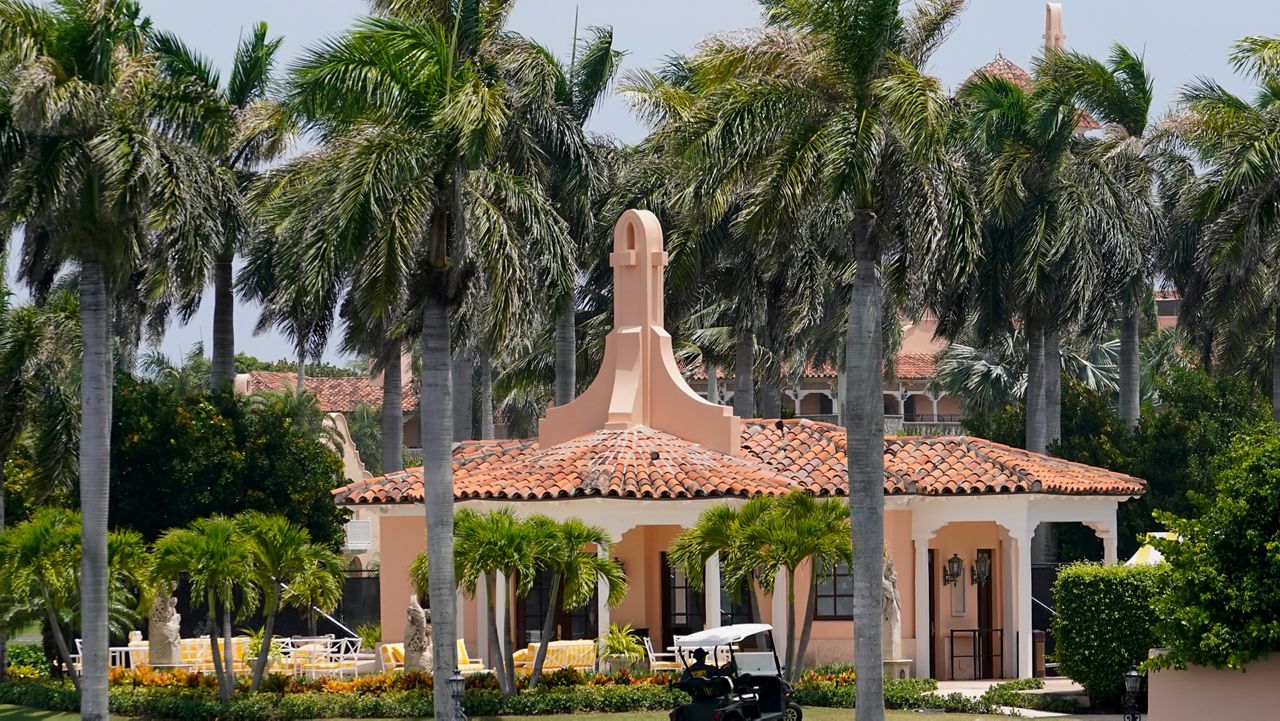 Former President Donald Trump said in a statement Monday evening that his Mar-a-Lago estate in Palm Beach, Florida, has been "raided" by FBI agents.

Sources familiar with the matter told The Associated Press the search was related to an ongoing probe of whether the former president took records from the White House to his Florida residence.

The action marks a dramatic and unprecedented escalation of law enforcement scrutiny of the former president. Though a search warrant does not suggest that criminal charges are near or even expected, federal officials looking to obtain one must demonstrate that they have probable cause that a crime occurred.

"Nothing like this has ever happened to a President of the United States before," Trump said in a lengthy statement. "After working and cooperating with the relevant Government agencies, this unannounced raid on my home was not necessary or appropriate."

Notably, Trump said that federal agents "even broke into my safe."

The former president charged that the raid was being politically motivated, blasting it as "prosecutorial misconduct" and "the weaponization of the Justice System." He also went on to make unfounded claims about his 2016 election opponent Hillary Clinton.

The search intensifies the months-long probe into how classified documents ended up in boxes of White House records located at Mar-a-Lago earlier this year. It occurs amid a separate grand jury investigation into efforts to overturn the results of the 2020 presidential election and adds to the potential legal peril for Trump as he lays the groundwork for another run.

A spokesperson for the Justice Department declined to comment on the search, including about whether Attorney General Merrick Garland had personally authorized the search.

A person familiar with the matter told the AP that the search happened earlier Monday and agents were also looking to see if Trump had additional presidential records or any classified documents at the estate.

Former federal prosecutor Brian Jacobs told Spectrum News that though the search warrant was reportedly related to records, it could potentially lead to other material.

“The FBI can go searching for evidence of one crime," Jacobs told Spectrum News. "But if it sees evidence of another crime, while executing the warrant, it's free to see is that.”

Former President Trump has not been charged with any crimes and has repeatedly denied any wrongdoing.

Familiar battle lines, forged during a four-year presidency shadowed by FBI and congressional investigations, quickly took shape again Monday night. Trump and his allies sought to cast the search as a Democratic-driven effort to keep him from winning another term in 2024. Some threatened investigations of the Justice Department and FBI if Republicans win control of the Senate or House this fall. Others have called for dismantling the FBI, severing ties between states and federal agencies and possibly impeaching Attorney General Merrick Garland.

However, the Biden White House and the Democratic leaders of the House and Senate each said they had no prior knowledge of the search. The current FBI director, Christopher Wray, was appointed by Trump five years ago and served as a high-ranking official in a Republican-led Justice Department.

Jean-Pierre faced repeated questions about the same topic on Tuesday, and referred questions to the Justice Department.

"You've heard us say this many times at this podium, you've heard the President say this: The Justice Department conducts investigations independently, and we leave any law enforcement matters to them," she said. "It would not be appropriate for us to comment on any ongoing investigations."

"President Biden has been unequivocal since the campaign he believes in the rule of law, in the independence of the Justice Department investigations, that those investigations should be free from political influence, and he has held that commitment as president," she continued, before quoting the president's remarks when he nominated Merrick Garland to serve as attorney general in January 2021.

Federal law bars the removal of classified documents to unauthorized locations, though it is possible that Trump could try to argue that, as president, he was the ultimate declassification authority.

There are multiple statutes governing classified information, including a law punishable by up to five years in prison that makes it a crime to remove such records and retain them at an unauthorized location. Another statute makes it a crime to mishandle classified records either intentionally or in a grossly negligent manner.

Trump has previously maintained that presidential records were turned over “in an ordinary and routine process.” His son Eric said on Fox News on Monday night that he had spent the day with his father and that the search happened because “the National Archives wanted to corroborate whether or not Donald Trump had any documents in his possession.”

Asked how the documents ended up at Mar-a-Lago, Eric Trump said the boxes were among items that got moved out of the White House during “six hours” on Inauguration Day, as the Bidens prepared to move into the building.

“My father always kept press clippings,” Eric Trump said. “He had boxes, when he moved out of the White House.”

Trump emerged from Trump Tower in New York City shortly before 8 p.m. and waved to bystanders before being driven away in an SUV.

In his first public remarks since news of the search surfaced, Trump made no mention of it during a tele-town hall on behalf of Leora Levy, the Connecticut Republican he has endorsed in Tuesday’s U.S. Senate primary to pick a general election opponent against Democratic U.S. Sen. Richard Blumenthal.

Other Republicans echoed Trump’s accusation that he was being targeted for political reasons. National Committee Chair Ronna McDaniel denouncing the search as “outrageous” and said it was a reason for voters to turn out in November.

Florida Gov. Ron DeSantis, a Republican who is considered a potential 2024 presidential candidate, said in a statement on Twitter that it was “an escalation in the weaponization” of U.S. government agencies. Kevin McCarthy, the House minority leader, said in a tweet that the Justice Department “has reached an intolerable state of weaponized politicization” and said that if Republicans win control of the U.S. House, they will investigate the department.

Trump lambasted that decision and then stepped up his criticism of the FBI as agents began investigating whether his campaign had colluded with Russia to tip the 2016 election. He fired Comey during that probe, and though he appointed Wray months later, he repeatedly criticized him too as president.

Thomas Schwartz, a Vanderbilt University history professor who studies and writes about the presidency, said there is no precedent for a former president facing an FBI raid -- even going back to Watergate. President Richard Nixon wasn’t allowed to take tapes or other materials from the White House when he resigned in 1974, Schwartz noted, and many of his papers remained in Washington for years before being transferred to his presidential library in California.

“This is different and it is a sign of how unique the Trump period was,” said Schwartz, author of “Henry Kissinger and American Power: A Political Biography.” “How his behavior was so unusual.”

The probe is hardly the only legal headache confronting Trump. A separate investigation related to efforts by Trump and his allies to undo the results of the 2020 presidential election and the Jan. 6, 2021, riot at the U.S. Capitol has also been intensifying in Washington.

And a district attorney in Fulton County, Georgia, is investigating whether Trump and his close associates sought to interfere in that state’s election, which was won by Joe Biden.

There is also a civil investigation into The Trump Organization’s business practices underway in New York.