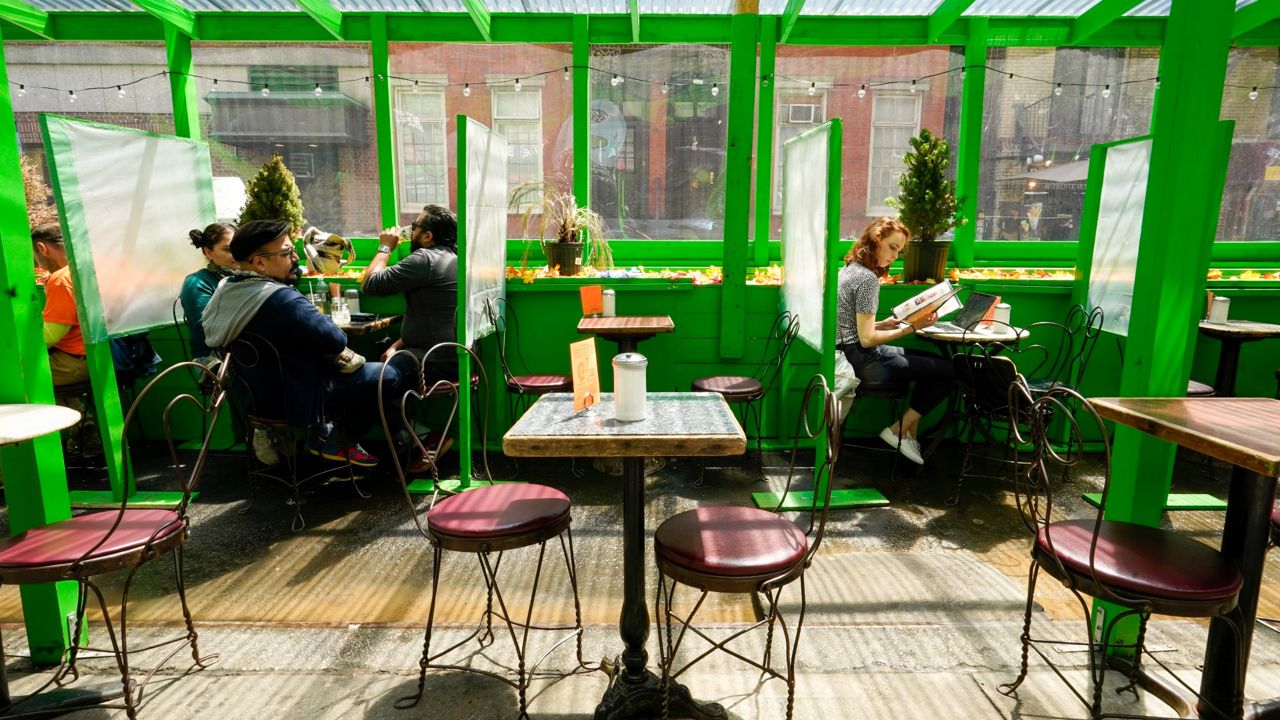 Lunch hour customers are seen in an outdoor seating area of a restaurant in the Greenwich Village neighborhood of Manhattan in New York, Tuesday, May 4, 2021. Some restaurants in New York City are starting to hire employees now that they can increase their indoor dining to 75% of capacity starting May 7. (AP Photo/Mary Altaffer)

A group of New Yorkers has filed a lawsuit against the city and state in an attempt to shut down the city's pandemic-era outdoor dining structures, which they say have hurt their communities.

In the lawsuit, the group says the structures have led to excessive noise, traffic congestion, less parking, garbage piled up on streets and more rodents.

Outdoor dining structures have become a normal sight on streets throughout the city because of the pandemic.

“I think the outdoor structures really saved everybody during COVID and allowed people to have a way to socialize,” Lisa Natt of Manhattan said.

However, some residents disagree.

Petitioner Douglas Armer, a party in the lawsuit, made an affidavit describing what he has seen at East 20th St. between Broadway and Park Avenue.

“The restaurant sheds that have been erected on the block harbor vermin, collect food waste and impede garbage collection. The result is a persistent unsanitary condition including garbage and broken glass strewn across the street, rodent infestation and standing water in the gutters,” Armer wrote in his statement.

The lawsuit includes affidavits from petitioners in other neighborhoods such as Washington Heights, Bushwick and Williamsburg.

Petitioners said they have similar issues with these outdoor structures, which they say are negatively affecting their quality of life.

As these residents take the issue to court hoping to get the city and state to lift the orders allowing the sheds, restaurant advocates say the structures are necessary.

“The outdoor dining for so many restaurants is still critical,” said Andrew Rigie, executive director of the New York City Hospitality Alliance.

“Just because you see a busy restaurant, doesn’t mean things are all fine and dandy,” he continued. “These restaurants were hit so hard so many of them did not get the adequate government support that they needed.”

The organization is now advocating that the city presents a permanent solution soon.

Back in February, the City Council passed legislation for a permanent program to keep outdoor dining.

It would address regulation for the structures and what agency would enforce those regulations, yet no guidance has been announced.

In the meantime, advocates say restaurants should be mindful of how they operate the outdoor areas.

“We need to make sure that even before we transition into a more standardized permanent program, we keep the outdoor dining clean, we take care of it, do the upkeep. And if you’re not using it now. It’s really time to take the structure down,” Rigie said.

Residents near East 20th Street told NY1 they enjoy having the outdoor seating, but feel more regulations are necessary to address the concerns outlined in the lawsuit.