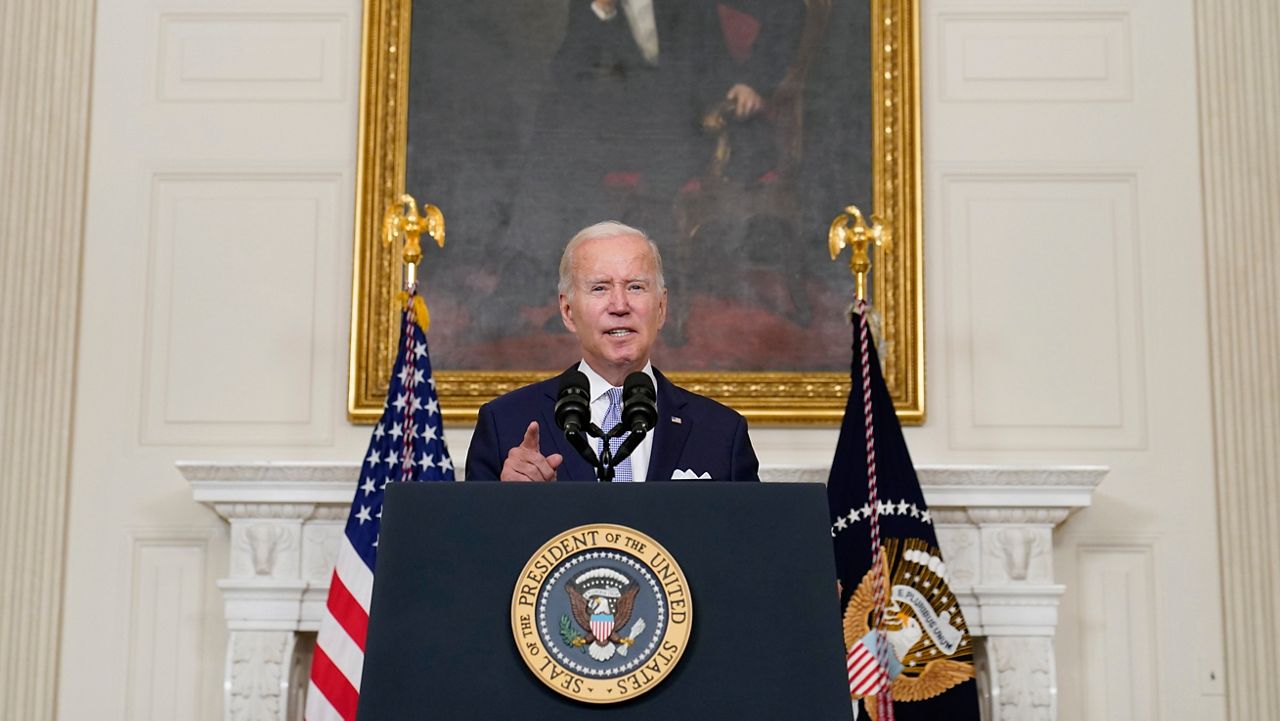 In a surprising turnaround, West Virginia Sen. Joe Manchin announced that he has reached a sweeping agreement with Senate Majority Leader Chuck Schumer, D-N.Y., on a $739 billion bill that includes lowering health care costs, addressing climate change and energy issues and levying taxes on higher earners and corporations after previously balking at including the latter provisions.

President Joe Biden on Thursday hailed the "historic" agreement, calling it a "godsend" for U.S. families.

"This bill would be the most significant legislation in history to tackle the climate crisis and improve our energy security,” Biden said.

"Simply put, the bill will lower health care costs for millions of Americans," the president added. "It will be the most important investment, not hyperbole ... in creating clean energy solutions for the future. It's a big deal."

"It'll also, for the first time in a long time, began to restore fairness to the tax code ... by making the large corporations in America pay their fair share of without any new taxes on people making under $400,000 a year," Biden continued, adding that "even some experts who have criticized my administration in the past agreed that this bill will reduce inflationary pressures on the economy."

"Put politics aside," Biden pleaded. "Get it done. We should pass this.”

The Senate is expected to take up the measure, known as the Inflation Reduction Act of 2022, next week, which could set Biden and Congressional Democrats up with a major legislative win on key priorities ahead of November's midterm elections.

Schumer told Democrats at a private caucus meeting Thursday morning that if they stick together and approve the deal, they can deliver a major win on "hugely important" priorities of health care and climate change, and Manchin called it a "win-win" in a call with reporters.

Manchin said that the bill "would dedicate hundreds of billions of dollars to deficit reduction by adopting a tax policy that protects small businesses and working-class Americans while ensuring that large corporations and the ultra-wealthy pay their fair share in taxes," Manchin wrote in a press release.

Following the announcement from Manchin, Schumer's office released a summary of the legislation, which includes:

So, what's in the Manchin-Schumer reconciliation deal?

Per a summary provided by their offices, the plan includes:
- $369B for "energy security and climate change"
- $300B in deficit reduction
- extend ACA subsidies
- empowers Medicare to negotiate drug prices
- tax changes

In terms of revenue, the lawmakers estimate that the measure will raise $739 billion, and invest $433 billion in energy security and climate change programs and roughly $300 billion in deficit reduction over the next decade. In terms of specifics, lawmakers esimated:

"The revised legislative text will be submitted to the Parliamentarian for review this evening and the full Senate will consider it next week," Manchin and Schumer said in a joint statement.

President Biden offered his endorsement in a statement, saying that he spoke to both Schumer and Manchin and "offered my support for the agreement they have reached on a bill to fight inflation and lower costs for American families."

The president will address the nation later Thursday on the agreement.

"This is the action the American people have been waiting for," he said. "This addresses the problems of today – high health care costs and overall inflation – as well as investments in our energy security for the future."

"If enacted, this legislation will be historic, and I urge the Senate to move on this bill as soon as possible, and for the House to follow as well," he added.

But passing the measure in the Senate could be an odyssey in and of itself – once the bill is officially introduced and brought to the Senate floor, the "vote-a-rama" process begins, during which lawmakers can propose and vote on any number of amendments to the measure. Many of these amendments are political messaging proposals that can slow down the process and force members of the opposing party to make difficult choices.

Following that, assuming Democrats have the support of all 50 members of their caucus and assuming no Republicans cross party lines to back the measure, they would need every lawmaker present in the Senate to vote, plus Vice President Kamala Harris to cast a tie-breaking vote – a tall order amid the COVID-19 pandemic.

Unlike the House of Representatives, the Senate does not allow for proxy voting. Several Senate lawmakers announced they had tested positive for COVID-19 in recent days, including Sen. Dick Durbin, D-Ill., the No. 2 Democrat in the chamber, who announced Thursday that he would be isolating due to the coronavirus.

It's already unclear whether or not fellow moderate Democrat Sen. Kyrsten Sinema of Arizona will back the package. She has previously been opposed to raising taxes throughout the negotiation process.

"We do not have comment as she will need to review the text," her office said. Manchin told reporters on Thursday he has not spoken to Sinema regarding the proposal, but added that "I would hope that she would be receptive."

One provision in the agreement, a tax on carried interest, is an issue that Sinema has been opposed to previously, but Manchin said he is "not prepared" to lose from the bill.

Manchin told Punchbowl News that Sinema "really was fighting hard on ‘No taxes.’ I think she was always hard on that. And I think that didn’t happen."

"She was adamant about not expanding the drug discounts to everything," he continued. "And she got that modified, so that she gets a big input in this. Really big."

Assuming the measure passes the Senate, it would head to the House before it could be sent to President Biden's desk. While the bill would likely face similar headwinds in the House assuming no Republicans cross over to support the measure, it is still likely to pass, as Democrats still hold a slim majority in the chamber.

House Speaker Nancy Pelosi, D-Calif., hailed the agreement as "welcome news" and "victory for America’s families and for protecting our planet."

"In light of the discussions of the past year, this agreement is a remarkable achievement," she wrote, before pleding that "we will continue to fight for priorities not contained in this legislation — because more must be done on behalf of America’s working families and to save the planet."

Previously, Manchin appeared to only agree to a much smaller party-line measure that would lower prescription drug prices and extend Affordable Care Act subsidies.

The West Virginia Democrat told Punchbowl News that his biggest hang-up on any measure was inflation, which he said "scared the bejesus" out of him.

"On Monday, I said, ‘Chuck, I’m not walking away, never have, my people are still working. If you want to see if we can basically scrub everything and make sure it’s not inflationary.’ That’s just how this went," he recalled. "And he says, ‘Yeah, we’re willing to engage again.’ And I said, ‘Okay, if you want to engage again.’ I said, ‘We haven’t stopped, we’re going through everything, taking out anything that we think could be inflammatory."

The conservative Democrat said he was open to considering a broader measure on environment and tax issues after Congress returns from recess in the fall, an offer that many Democrats thought dubious.

Manchin pushed back on the notion that he was stringing fellow Democrats along.

"When you come to me, and I don’t think I’m for it, I’ll still sit and work with you because maybe I’m not seeing something," he told Punchbowl News. "And people think, ‘Well, Joe just drags us along.’ I didn’t drag it on. I tried to find a positive position. And I go to the ends of the world. Maybe I should say, ‘Hey, I’m done.’”

"I support a plan that will advance a realistic energy and climate policy that lowers prices today and strategically invests in the long game," Manchin said in Wednesday's announcement.

"Rather than risking more inflation with trillions in new spending, this bill will cut the inflation taxes Americans are paying, lower the cost of health insurance and prescription drugs, and ensure our country invests in the energy security and climate change solutions we need to remain a global superpower through innovation rather than elimination," he added.

Notably, Manchin made the announcement shortly after the passage of a $280 billion bill aimed at bolstering domestic semiconductor production and funding science and technology research. Senate Minority Leader Mitch McConnell, R-Ky., had recently threatened to sink that bill if Democrats were to move ahead with a "partisan reconciliation bill."

In a statement posted to Twitter Wednesday night, McConnell railed against the proposal, accusing Democrats of rampant spending which led to inflation, and saying this bill will harm Americans' jobs.

"Democrats have already crushed American families with historic inflation," he wrote on Twitter. "Now they want to pile on giant tax hikes that will hammer workers and kill many thousands of American jobs."

"First they killed your family's budget," McConnell added. "Now they want to kill your job too."

There was no immediate explanation why Manchin had suddenly agreed to the far broader package. In December, his resistance derailed a wide-ranging $3.5 trillion, 10-year social spending and climate change bill, known as the Build Back Better bill, that was President Joe Biden’s top domestic priority. Manchin said Thursday that the Build Back Better bill was "too much for America."

He did, however, push back on the notion that Wednesday night's announcement was a reversal.

"I never made a reverse in my life time and I never walked away," he told reporters in a virtual call on Thursday, adding: "All of you might be surprised, but there should be no surprise because I've never walked away from anything in my life."

"I’ve taken one hell of an ass-kicking for what, eight months now? From every side you could possibly have," he told Punchbowl News. "But I never gave up. The smart thing politically for me [to] do once Build Back Better was done and I walked away was to let a sleeping dog lie."

“But when you get a moment in time, and if you know in your heart something needs to be done, it’s the right thing," he added.