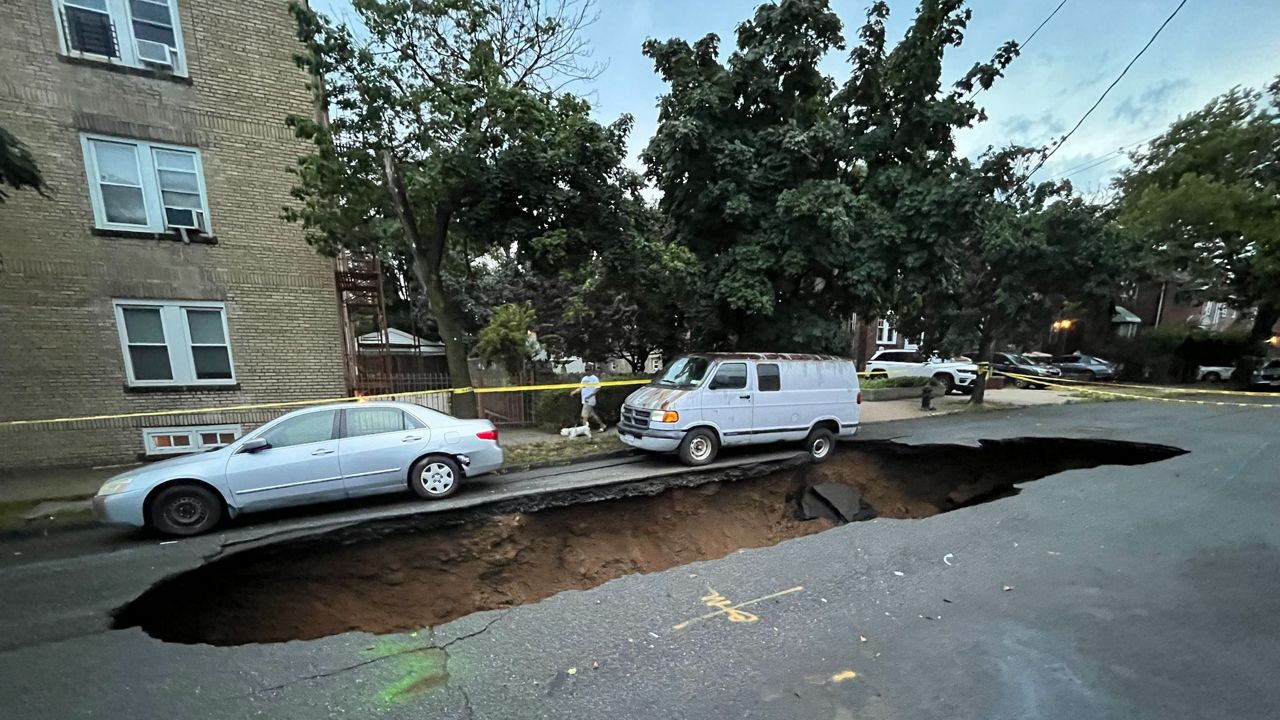 Repairs underway after sinkhole swallows van in the Bronx

By Stef Manisero and Alyssa Paolicelli The Bronx
SHARE

Neighbors in Morris Park gathered for hours Monday, watching along as a sinkhole swallowed up a van parked on the street.

The van belonged to Antonio Papadoboulos, who had owned it for 15 years.

When asked if he was nervous as he watched and waited for the inevitable, Papadoboulos said, “no, I’m just going to buy a new one.”

The sinkhole formed when a sewer beneath it collapsed Monday, after heavy rain came down in the Bronx.

Antonio Papadoboulous could only watch as his van got swallowed up by this sinkhole. We talk with him tonight at 10 @NY1 https://t.co/YspUehX84G pic.twitter.com/ihnBFJ6Q9J

On Monday night, the city’s Department of Environmental Protection had said the sinkhole is “not likely weather-related,” but by Tuesday morning DEP officials said they were looking into all potential causes of the sinkhole, including yesterday’s severe weather.

DEP crews removed the vehicle from the sinkhole Tuesday morning, and work has begun to repair the damaged infrastructure.

DEP officials say repair work is ongoing and they are aiming to restore water service as soon as possible.

Currently, DEP tells NY1 that there are 20 homes without water service. The agency has set up two water-on-the-go bottle fillers in the area.

“They’re going to backfill the excavation as much as they can just to give enough of us access to replace the infrastructure,” Sapienza told NY1 reporter Alyssa Paolicelli. “The water main, the sewer, that’s going to continue on for today and we should have at least some of the roadway restored by the end of the day. But there’s going to be a trench for several more days.”

This is the second significant sinkhole the street has seen in the last year. Another sinkhole opened farther down the block after Hurricane Ida.

The DEP says they will be scheduling an entire sewage replacement for the neighborhood to help prevent any such occurrence from happening again.

Nassr Saidi pushed water out of his basement as it bubbled up through the shower drain.

And it wasn’t the first time.

Saidi says in the two years he’s lived in his home, it has flooded three times.

He believes it’s a problem with the sewer, the same sewer that collapsed under the road Monday.

“It cannot take the water no more, so the water instead of going to wherever it’s going, is flooding through people’s basements,” Saidi said.

Saidi says his home means everything to him.

“This is my life savings. I’d been working for 40 years. This is my first home,” Saidi said.

But a home where he lives in fear, every time it storms.

“I don’t know if it’s going to happen next year, maybe in a few hours, maybe next week, when?” Saidi said.