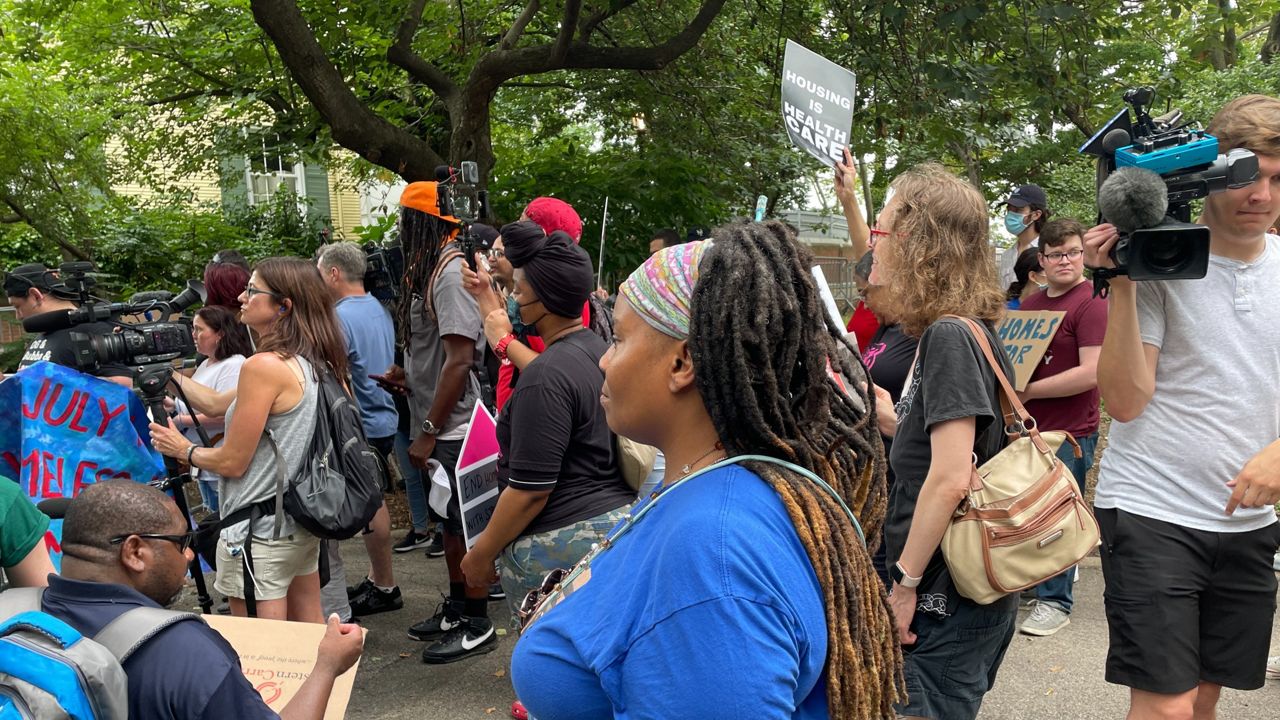 
Demonstrators protested what they believe at misguided efforts to address the city’s homeless population, including clearing homeless New Yorkers out of subways and homeless encampments.

Activists claim these efforts are sometimes done without support from social services.

Demonstrators, like Felix Guzman, said these actions only perpetuate what Guzman calls the “hamster wheel of homelessness.”

“I am very upset because I am formerly incarcerated and formerly homeless myself,” Guzman, who is a member of the advocacy group Local NY, said. “So I know the struggle to actually find safe affordable and dignified housing myself.”

He got off of that hamster wheel because of advocates who want the city to invest in more permanent housing solutions for the most at-risk individuals, “who might happen to have mental illness and be struggling with substance and alcohol and who might be formerly incarcerated,” Guzman said.

The rally followed a tour Adams took late Friday night with other advocates to areas affected by homelessness in Harlem and shelters on Wards Island.

Last night, @homeless_hero and I went to Wards Island to visit our brothers and sisters in shelter.

This is what I’m talking about when I say you must inspect what you expect.

This is how we learn from and deliver for our neighbors experiencing homelessness. pic.twitter.com/ZHJbTwIAY8

In a statement pushing back against the criticism, Adams said in the four months since his administration began sweeps to remove homeless New Yorkers from subways, over 1,700 homeless people have accepted social services, saying they are, “getting connected with resources to build a more stable life.”

Data from the city’s Department of Homeless Services shows over 60,000 New Yorkers live in homeless shelters and without a pathway to permanent housing.

Deaths among homeless New Yorkers have also risen significantly over the past two years, according to the city’s DHS data.

“We understand that people are not moving out of shelters at all and the numbers shows it,” Marcus Moore, a board member and chair of Picture the Homeless, said.

Advocates also mentioned conditions inside of most of these shelters can make the streets seem more appealing.

Restler said lawmakers plan to push for legislation to mandate better shelters with privacy and services, “so that these are safe places to go and so that we can get people access to housing that they really need.”

This push is something Guzman said he and others who were affected by homelessness deserve.

“I was someone that was deserving of dignity and respect and also to be honored,” Guzman said.