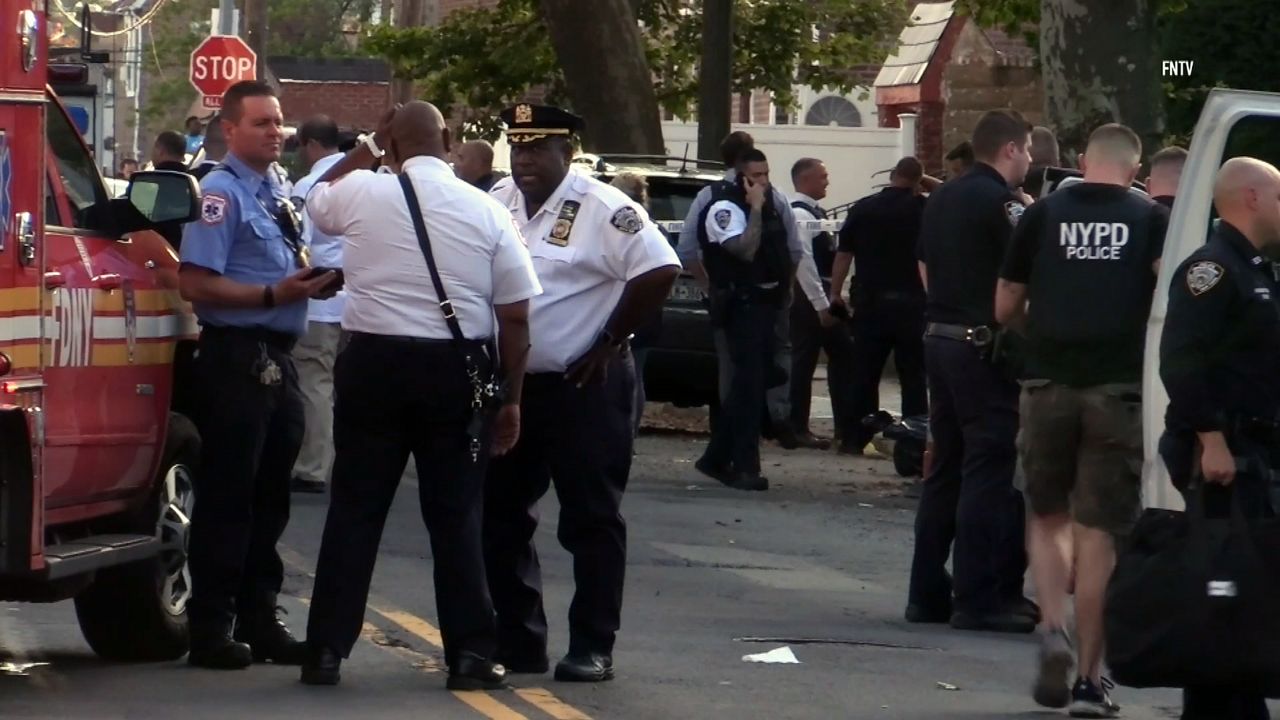 Police officers at the scene of the shooting in St. Albans Saturday evening. (NY1)

Two men die after being shot by police in separate incidents: NYPD

Two men ⁠— one in Queens and one in Brooklyn ⁠— died after being shot by police Saturday evening, the NYPD said.

According to NYPD Chief of Patrol Jeffrey Maddrey, a man who identified himself by name called 911 twice and made threats to multiple officials, including the governor and members of the police department.

Maddrey said members of the 113th Precinct listened in on the second call and responded with multiple units. According to Maddrey, when officers walked toward the house, a man emerged from the house, and confirmed his identity when one of the officers called him by name.

The man then immediately started cursing at the officers and refused to comply with commands from officers, Maddrey said. According to Maddrey, after a short verbal exchange, the man pulled out a gun and fired it at officers.

At least six officers returned fire, and the man was struck, according to Maddrey.

Maddrey said officers attempted life-saving measures on the man who was shot at the scene. However, the man ultimately died of his wounds at the hospital, according to Maddrey.

The FDNY said a total of 10 officers were also injured at the shooting. Nine officers were transfered to Northshore Community Hospital with non-life threatening injuries, while one refused medical attention. Maddrey said they were treated for conditions like tinnitus, trauma and high blood pressure.

According to Maddrey, about an hour and a half later, at around 7:30 p.m. in Downtown Brooklyn, officers withthe 88th Precinct's public safety team stopped a gold Nissan that they observed committing traffic violations while traveling down Flatbush Avenue.

At some point, the officers asked the occupants of the vehicle to step out of the car, Maddrey said. At that point, according to Maddrey, the man in the front passenger side of the car left the vehicle and started running.

One of the officers from the 88th Precinct public safety team pursued the man on foot for a short time, Maddrey said. According to Maddrey, that pursuit stopped in the vicinity of Rockwell Place and Lafayette Avenue, when the man who fled the car pulled out a gun and started firing at the officer. The officer fired back and struck the man in the chest, Maddrey said.

The man who was shot in this incident later died of his injuries at a local hospital, according to Maddrey. Maddrey said the officer that chased him was treated for tinnitus and other injuries.

Guns were recovered at the scene of both shooting incidents, according to the NYPD, who provided photos on social media.

Below is a photo of the gun recovered from the shooting in the @NYPD88Pct. pic.twitter.com/ISR1nJV0RM