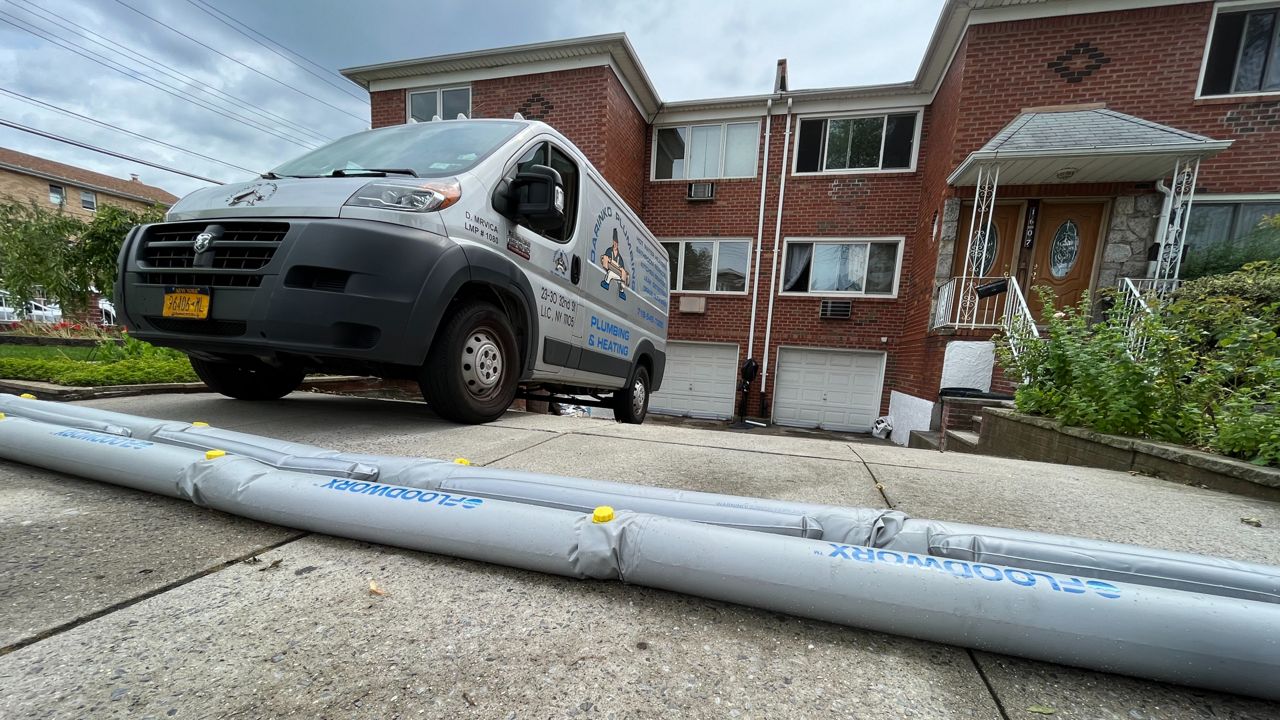 Darinko Mrvica and his family have lived in his well-manicured brick home in Whitestone, Queens, for 40 years. The basement floods about every four, he said.

During Hurricane Ida, water from the intense rainfall spilled over the top of his sunken driveway, climbing halfway up his garage doors and causing one of them to cave in completely.

Mrvica has tried getting the city to let him make a cement berm, to stop the water from pouring into his property — without success.

“​​I don't know how much you know about water,” Mrvica, a plumber who knows from misplaced water, said. In his experience, homeowners like him are at the mercy of the rain. “How much you can do — not much.”

Yet on Wednesday, the city offered a different solution: Inflatable dams, filled with water and laid in an interlocking row across the entrance to the driveway, that it hopes will stem the kind of torrents brought by major rainstorms.

Mrvica’s home was the site of an exclusive demonstration for NY1 of City Hall’s latest effort to address inland flooding, which includes distributing the dams, as well as sandbags, to residents of particularly flood-prone properties, for them to set up themselves when the region is forecasted for significant rainfall.

The distribution project, begun more than a month into hurricane season, comes as the city has made only modest progress in preparing for extreme rainfall events like Hurricane Ida, according to elected officials, policy experts and residents. The storm caused 13 deaths, 11 of which came in basement apartments overrun by floodwaters.

The project is meant to signal a shift in how city residents ought to think about their role in dealing with flood risk, Rit Aggarwala, the commissioner of the city’s Department of Environmental Protection, said at the demonstration.

“New Yorkers are going to need to develop a culture of preparedness,” Aggarwala said, standing outside Mrvica’s home. “It doesn't mean the city is going to shirk responsibility. We’re going to do everything we can.” 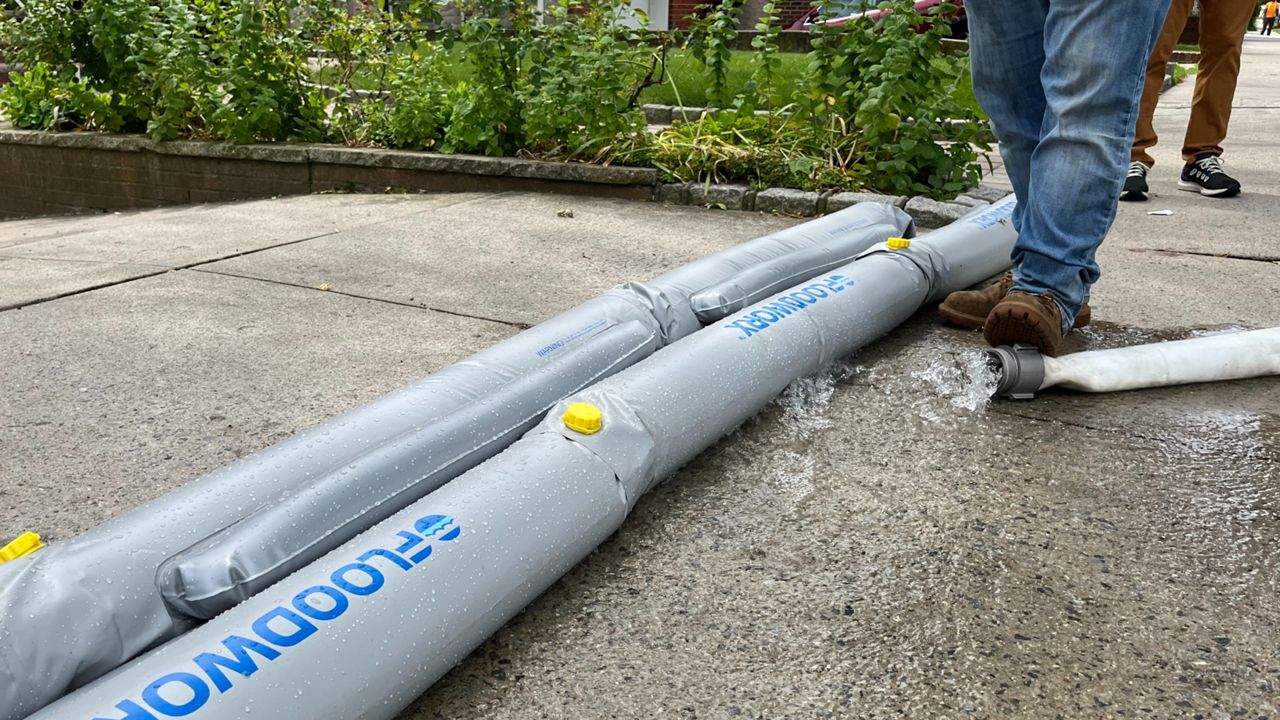 It took six of the small fillable dams, each about the size of a lifeguard’s rescue tube, to cover the border between the sidewalk and driveway of Mrvica’s home. DEP workers also put extra dams across his two sliding garage doors, just in case.

Water gushing from a firehose aimed toward the dams — and held in place under the heel of a DEP worker’s boot — failed to cross the threshold.

Aggarwala said the DEP will send a letter to about 8,000 homes with between one and four units in the most flood-prone parts of the city in the coming weeks, based on a newly developed map that models current risk across the city from moderately bad storms. That new map, Aggarwala said, is also driving DEP decision-making about where to make changes in the sewer system or to add green infrastructure elements.

(The map, based on floodwater models released by the city last year, does not show Mrvica’s home as a likely area for flooding, despite the intense water damage his home sustained during Ida last September. Mrvica still received several dams after the demonstration as thanks for offering his home as a test site.)

Residents of homes shown by the map to be at risk will then have to get the dams from distribution points sometime in August, ahead of the height of storm season. A spokesperson for the DEP said the department has about 25,000 dams on hand, and will tailor how many dams each home gets to its specific topography or layout.

The city will also distribute the sandbags — as many as the residents want to take — and encourage New Yorkers to sweep debris from sewer grates. The giveaway will cost the city about $2.5 million, the department spokesperson said.

Aggarwala said that New Yorkers who are not eligible to receive the dams for free can purchase them. One four-foot dam currently sells for $43.95 on Amazon.

It’s part of an effort to get New Yorkers to change their own sense of personal responsibility in response to climate change, Aggarwala said, noting that property owners along the coast in the southeastern U.S. are told to keep a stockpile of food, water and medicine in case of severe storms.

“We are gonna have to embrace stopgap measures,” Aggarwala said.

The DEP’s new resource guide, called “Rainfall Ready NYC,” is the city’s first public document on storm preparedness since a series of reports last year on the damage caused by Ida, and how the city planned to respond. It does not provide specific progress updates on the dozens of efforts detailed in those first reports — including accelerating storm sewer upgrades, adding stormwater catchment areas in parks and improving outreach to residents of basement homes —  leaving some of their fates unclear.

The emphasis on homeowner responsibility comes after statements by Mayor Eric Adams describing the city’s role in storm preparedness as largely one of communicating risk, evacuation routes and possible preventive measures for flooding.

Indeed, the four sections of the document feature a portion on the city’s role, as well as a second header, titled “But we all have a role to play,” which describes what residents can do on their own to prevent flooding. To that end, the city says it plans to run workshops “to help homeowners understand simple, cost-effective steps that they can take to protect their properties from stormwater flooding.”

The report, Aggarwala said, “should lead a homeowner to buy flood insurance, or to think, ‘What do I have in the basement that’s at risk, that I should elevate or move.’”

Aggarwala said that the city cannot guarantee it will be able to help elderly residents, or those with mobility issues, inflate and assemble the dams ahead of a storm.

“Unfortunately, right now, this is a starting point, so we are going to be handing them out, and hoping that homeowners that manage to maintain their properties, manage to mow and rake their lawns, et cetera, are able to do what is really a relatively easy installation,” Aggarwala said.

The resource guide notes that the city is still making updates to its Flash Flood Emergency Plan, due to be completed in August, and continues to develop storm-specific messaging for basement unit households. (All but one of the properties where people drowned in basement units during Ida are eligible for free dams from the city, based on the newly developed map.)

Yet the guide shows that the city is behind schedule on some of the efforts described in last year’s post-Ida reports, such as installing warning signage at dozens of flood-prone intersections.

Mike Dulong, an attorney with the environmental organization Riverkeeper, said that the report shows that the city is “developing pre-storm warnings and knowledge building, which are crucial to prevent loss of life and injuries.”

But, he added, some of the projects detailed in the report have been ongoing since before Ida, such as developing 1,300 new pieces of green infrastructure, like planted medians or rain catchment areas around sidewalk trees.

The city is still in desperate need of a comprehensive plan to tackle stormwater, said Amy Chester, the managing director of Rebuild By Design, an environmental consulting firm.

“Hey, climate change is here, we’ve seen that already, and we are going into another hurricane season,” Chester said. “So unless we are planning a little bit quicker, we are never gonna catch up.”

In a newly released report from Rebuild By Design, dozens of experts give their two cents on what the city needs to do to become more resilient in the face of extreme weather. In many cases the suggestions are the same as before Ida; a few, such as an updated stormwater map, are reflected in the city’s new resource guide.

“In terms of stormwater preparedness, we are definitely behind,” Chester said. 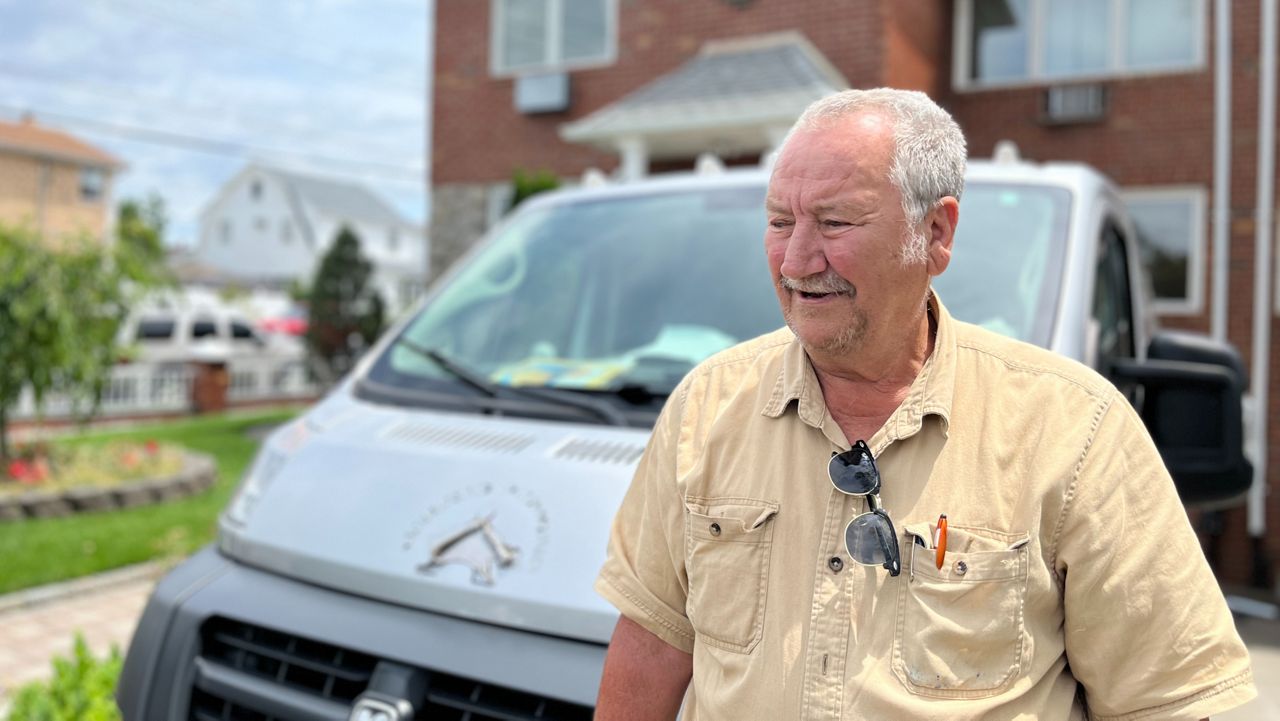 Darinko Mrvica said he was skeptical of the plan, but hoped it would work. (NY1/Ari Ephraim Feldman)

The city’s latest efforts to prepare residents for flooding comes as elected officials and policy experts are clamoring for what they describe as bolder steps to protect against intense rainfall. They say they have seen hoped-for projects fall by the wayside.

“There are some good things going on,” said Queens Borough President Donovan Richards. “But for all the progress that we’re making, the city is still unprepared in the event of another catastrophic storm.”

Zach Iscol, the city’s commissioner of emergency management, said at the dam demonstration that the city is better prepared for an Ida-like storm.

Now, he said, “New Yorkers need to look in the mirror and say, ‘Are we prepared?’”

Aggarwala said the DEP is still focused on making physical changes to the city, such as adding new rain gardens and expanding the city’s blue belt natural areas for soaking up excess water. He said that a full resiliency plan will likely not come out until April 2023.

Mrvica says he is hopeful, if skeptical, that the city will be able to tackle the flooding successfully. He says he plans to use the several dams left on his doorstep by DEP workers, but will also set thick sheets of plywood across the garage door, to hold back the potential pool of water.

“Commissioner has a nice plan,” Mrvica said. “But whether he can do it, I don't know.”