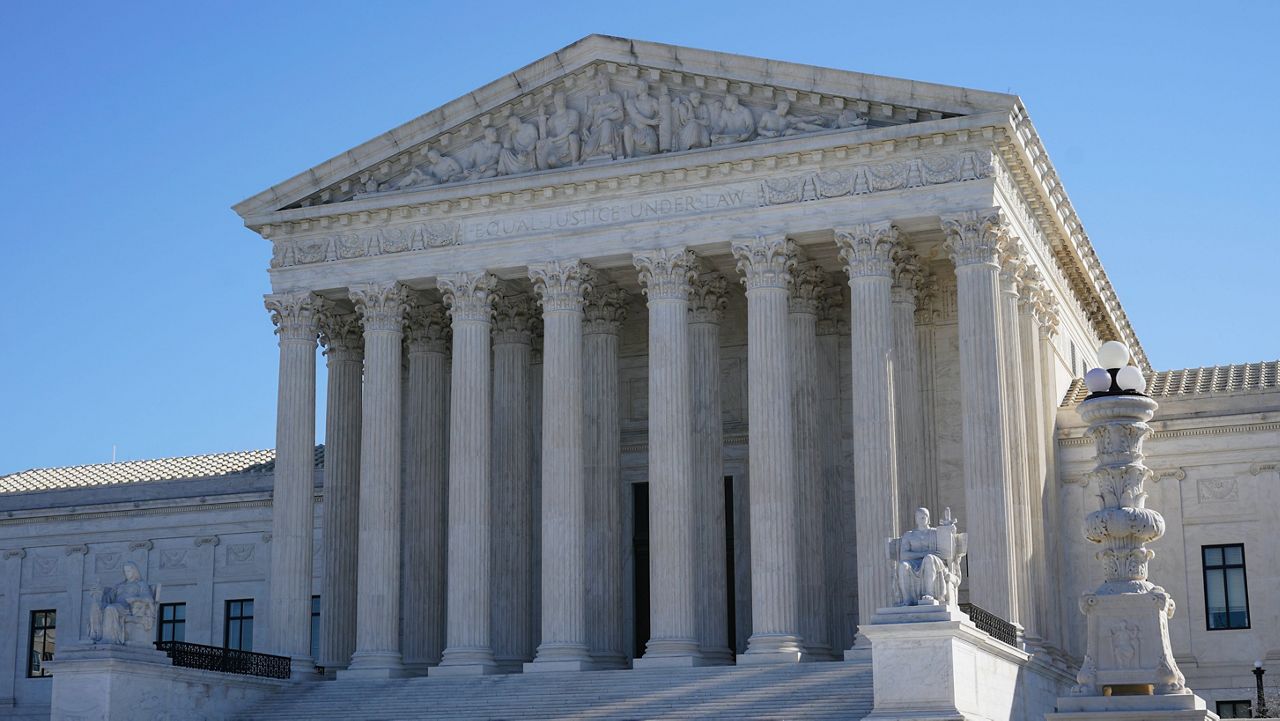 The United States Supreme Court has struck down a New York gun safety law which requires people to show "proper cause" to get a license to carry a concealed handgun outside the home, delivering a major win for Second Amendment advocates.

Writing the opinion for the 6-3 majority, Justice Clarence Thomas wrote that "New York’s proper-cause requirement violates the Fourteenth Amendment by preventing law-abiding citizens with ordinary self-defense needs from exercising their Second Amendment right to keep and bear arms in public for self-defense."

The ruling, which fell along the high court's ideological lines, said that New York's rule – which is more than a century old – violates the Second Amendment right to "keep and bear arms." The decision is the first major Second Amendment opinion from the Supreme Court in more than a decade.

The case, New York State Rifle & Pistol Association v Bruen, concerned a person’s right to carry a concealed firearm for self-defense under the Second Amendment, and asked the question of whether the state's denial of the two petitioners' applications for concealed carry licenses for self-defense violated the amendment.

Supporters of New York's law, which has been in place since 1913, argued that striking down the law could lead to more guns on the streets and higher crime rates amid a spike in gun violence.

In a blistering 51-page dissent, Justice Stephen Breyer, who is retiring at the end of this term, wrote that the high court's conservative supermajority overturned New York's law "without considering the potentially deadly consequences of its decision."

"In 2020, 45,222 Americans were killed by firearms," Breyer wrote. "Since the start of this year (2022), there have been 277 reported mass shootings — an average of more than one per day. Gun violence has now surpassed motor vehicle crashes as the leading cause of death among children and adolescents.

"Many States have tried to address some of the dangers of gun violence just described by passing laws that limit, in various ways, who may purchase, carry, or use firearms of different kinds," he continued. "The Court today severely burdens States’ efforts to do so."

Several other states, including California, Hawaii and Massachusetts, have similar restrictions on the books, which will likely face similar challenges because of Thursday's ruling. The ruling could allow for more people to carry guns in some of the United States' largest cities, including Boston, Los Angeles and New York.

While gun rights advocates celebrated the decision, others expressed outrage, including President Joe Biden, who called the ruling "deeply disappointing" and New York Gov. Hochul, who pledged to take action, including raising the possibility of calling the state's legislature into session to address the move.

President Biden said in a statement that the high court with its ruling "has chosen to strike down New York’s long-established authority to protect its citizens" and said the decision "contradicts both common sense and the Constitution, and should deeply trouble us all."

"In the wake of the horrific attacks in Buffalo and Uvalde, as well as the daily acts of gun violence that do not make national headlines, we must do more as a society — not less — to protect our fellow Americans," the president wrote. "I remain committed to doing everything in my power to reduce gun violence and make our communities safer."

"I urge states to continue to enact and enforce commonsense laws to make their citizens and communities safer from gun violence," Biden continued. "As the late Justice Scalia recognized, the Second Amendment is not absolute. For centuries, states have regulated who may purchase or possess weapons, the types of weapons they may use, and the places they may carry those weapons. And the courts have upheld these regulations.

"I call on Americans across the country to make their voices heard on gun safety," he added. "Lives are on the line."

Today's Supreme Court ruling on guns is deeply troubling as it defies commonsense and the Constitution. Lives are at stake. Congress should pass the bipartisan gun safety proposal immediately and continue to do more to protect our communities.

"Lives are at stake," Harris wrote in a Twitter post. Congress should pass the bipartisan gun safety proposal immediately and continue to do more to protect our communities."

In a statement, the Department of Justice said that they "respectfully disagree" with the high court's ruling.

"The Department of Justice remains committed to saving innocent lives by enforcing and defending federal firearms laws, partnering with state, local and tribal authorities and using all legally available tools to tackle the epidemic of gun violence plaguing our communities," the statement reads.

At a press conference Thursday, Hochul called the decision "reckless" and "reprehensible" and said that the Supreme Court violates "what New Yorkers want."

“Does everyone understand what a concealed weapon means?" she asked. "That you have no forewarning. That someone can hide a weapon on them and go into our subways, go into our grocery stores, like stores up in Buffalo, New York, where I’m from. Go into a school in Parkland or Uvalde."

"This could place millions of New Yorkers in harm’s way," Hochul charged, saying that when the Constitution was drafted, “the only weapons at the time were muskets."

“I don’t think they envisioned the high capacity assault weapon magazines intended for battlefields as being covered, but I guess we’re just going to have to disagree,” she said.

In response to this ruling, we are closely reviewing our options – including calling a special session of the legislature.

Just as we swiftly passed nation-leading gun reform legislation, I will continue to do everything in my power to keep New Yorkers safe from gun violence.

“As governor of the state of New York, my number one priority is to keep New Yorkers safe, but today the Supreme Court is sending us backwards in our efforts to protect families and prevent gun violence,” Hochul said. “And it’s particularly painful that this came down at this moment, when we are still dealing with families in pain from mass shootings that have occurred, the loss of life, their beloved children and grandchildren.”

"We are not powerless in this situation," says @GovKathyHochul. "We're not going to cede our rights that easily."

She vowed New York will enact new gun regulations after the Supreme Court struck down a state law requiring "proper cause" for a concealed carry license. pic.twitter.com/FyOvVttD1G

“I’m prepared to call the Legislature back into session to deal with this,” Hochul said. “We’ve been in contact with leadership — we’re just looking at dates — but I will say, we are not powerless in this situation. We’re not going to cede our rights that easily, despite the best efforts of the politicized Supreme Court of the United States of America.”

“This decision isn’t just reckless, it’s reprehensible,” she added. “It’s not what New Yorkers want, and we should have the right of determination of what we want to do in terms of our gun laws in our state.”

In a statement, New York City's mayor Eric Adams said that the ruling "will put New Yorkers at further risk of gun violence" adding that his administration has been preparing for the ruling "and will continue to do everything possible to work with our federal, state, and local partners to protect our city."

"Those efforts will include a comprehensive review of our approach to defining ‘sensitive locations’ where carrying a gun is banned, and reviewing our application process to ensure that only those who are fully qualified can obtain a carry license," Adams wrote. "We will work together to mitigate the risks this decision will create once it is implemented, as we cannot allow New York to become the Wild West."

“One thing is certain: We will do whatever is in our power, using every resource available to ensure that the gains we’ve seen during this administration are not undone, to make certain New Yorkers are not put in further danger of gun violence," he added. "This decision may have opened an additional river feeding the sea of gun violence, but we will do everything we can to dam it.”

We are currently reviewing the decision from the Supreme Court on New York's ability to regulate who can carry firearms in public.

But we will continue to do everything in our power to protect New Yorkers from gun violence and preserve our state's common sense gun laws.

"We will continue to do everything in our power to protect New Yorkers from gun violence and preserve our state's common sense gun laws," she pledged.

Manhattan District Attorney Alvin Bragg said Thursday that "the Supreme Court may have made our work harder, but we will only redouble our efforts to develop new solutions to end the epidemic of gun violence."

New York Rep. Elise Stefanik, the chair of the House Republican Conference, called the ruling a victory for "the Constitutional rights of law-abiding citizens to keep and bear arms" and slammed the now-defunct New York law, calling it a "shameful attempt to shred Second Amendment rights of New Yorkers."

The high court's decision comes as the Senate is attempting to enact a gun safety measure in the wake of the deadly mass shootings in Uvalde, Texas, and Buffalo, New York, the first major firearms legislation in nearly three decades. The ruling does not impact the Senate's federal gun safety bill.

This is a developing story. Check back later for further updates.