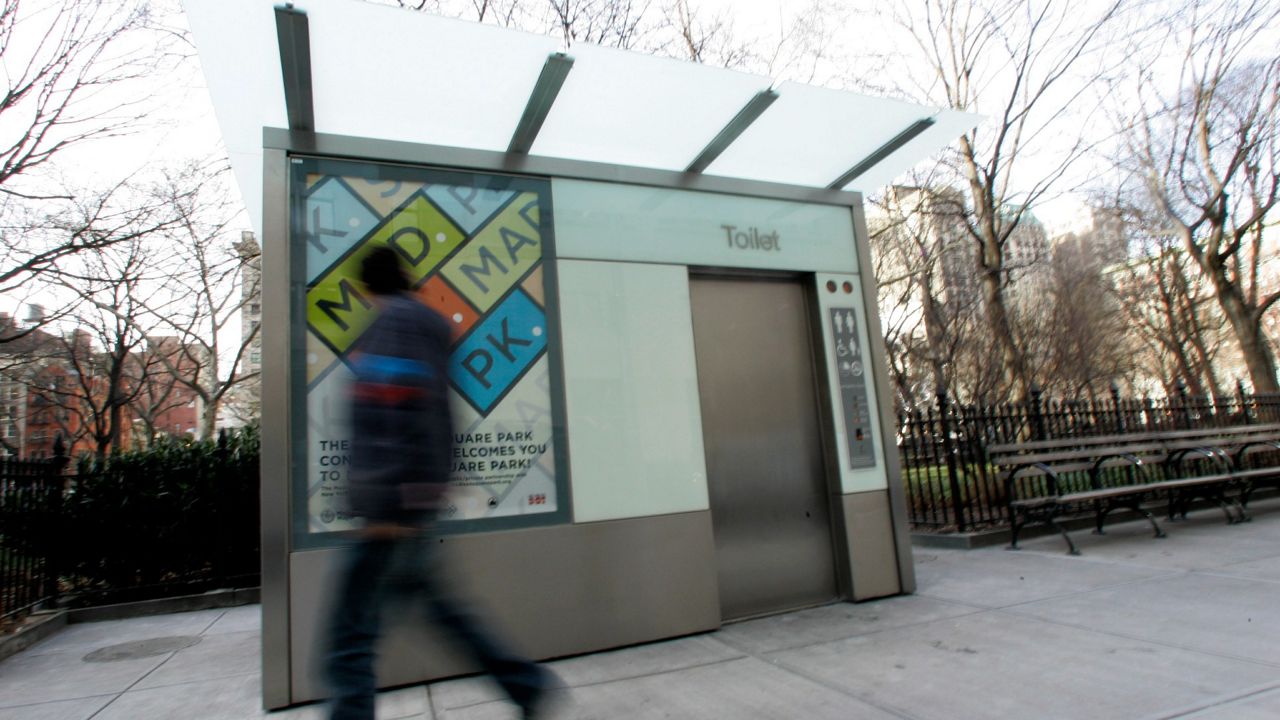 A pedestrian walks past one of the city's public toilets outside Madison Square Park. (AP /Mary Altaffer)

Need a bathroom? This New Yorker is here to help

Teddy Siegel knows where the best free bathrooms are in New York City and wants to make sure everyone else does too.

After a close-call in Times Square last July, she made it her mission to not only map out bathrooms across the city, but also share that information with others.

She said she had been turned away from multiple stores until she arrived at a McDonald’s in the area. They told her she had to buy something before using the bathroom, she said.

After that incident, Siegel, who lives in Gramercy, launched got2gonyc social media accounts to spread the word on free, accessible and clean bathrooms in the city.

“If there was a resource that provided the information on where the bathroom was located, I could have saved my money and used the bathroom for free and so I basically created that [resource],” she said.

New York City has dealt with a scarcity of public bathrooms for years, but Siegel’s resource comes at a time when the issue has been made particularly stark by the pandemic.

Many restaurants and businesses cut off access to their bathrooms during the crisis, and only recently have started opening them up to the public. Subway bathrooms have been closed for about two years, leading to an increase of public defecation and urination in various parts of the city, according to Upper West Side Councilwoman Gale Brewer.

“This is a topic that gets discussed often, but never resolved,” Brewer said.

In 2008, the Bloomberg administration launched a program to install 20 automatic public toilets across the city. But the program never really took off — only a handful of the toilets were ever installed.

According to a 2019 report by the city comptroller’s office, there were just 16 bathrooms for every 100,000 residents across the city’s parks and playgrounds.

New York City ranked No. 93 out of 100 on a list cited in the comptroller’s report of cities with the most public bathrooms per capita.

Lawmakers like Brewer say that there are many issues when it comes to increasing bathroom access in the city, including the “monumental” cost.

The cost to renovate a bathroom ranges from $1.4 million to $2.2 million, and the cost to construct a new one is approximately $3.5 million, according to the parks department.

Another issue is community pushback from people who do not want public bathrooms installed in their neighborhoods “because they're afraid of who might be using the bathroom,” Brewer said.

Many people rely on businesses like Starbucks, which made its bathrooms open to the public, regardless of whether a person is a paying customer, following an incident involving the arrest of two Black men in 2018 at a Philadelphia Starbucks.

This issue of bathroom access and the problem of relying on private businesses is why the City Council introduced legislation in April that would “require the city to release a report identifying ‘feasible’ sites for public bathrooms in every ZIP code,” according to a press release by the two sponsors of the bill, Councilwoman Rita Joseph and Manhattan Borough President Mark Levine.

This is just the start of fixing the issue, according to legislators.

“We have to get a report going so that we are clear as to what plan we have for something that is sustainable,” said Brewer, who is also sponsoring the bill. “One ZIP code would be a beginning.”

The lack of bathrooms can have serious consequences for people dealing with certain conditions.

Those who suffer from digestive issues or other types of chronic illnesses that require easy access to bathrooms can develop severe mental health issues because of the lack of access, according to experts.

“If you can imagine having such urgency where you have a medical condition that's causing it and not having access to a bathroom — the amount of anxiety that may cause for people will result in things like agoraphobia, they'll be afraid of going out in public if they don't have ready and known access to public bathrooms,” said Dr. Rabia De Latour, a gastroenterologist and therapeutic endoscopist at Bellevue Hospital.

There’s also the issue of racial profiling when it comes to determining who gets access to certain bathrooms in the city.

“This is where racism is alive and well in many cases as to who gets to use some of the bathrooms that are in hotels, restaurants, etcetera,” Brewer said.

It’s an issue Siegel, who said she hasn’t had to deal with personally as a young, cis, white woman, said she wants to prioritize when it comes to sharing information and resources.

“Some people do have the privilege where they'll be able to walk into one of those buildings and not be told to leave or questioned,” she said. “And I've had so many followers comment saying that, ‘Actually, this building didn't work for me because immediately someone came up to me and was like, ‘What are you doing here?’ ”

For instance, delivery workers, who are largely from immigrant communities, were dealing with a lack of bathroom access from the restaurants they were picking up food from, even as the city came to largely rely on their labor during the pandemic. This led to the City Council passing a package of bills ensuring the rights of delivery workers, including access to restaurant bathrooms.

The city is also a tourist destination and wherever tourists tend to congregate, there should be extra bathrooms, Brewer said.

But at the end of the day, she said this is a universal problem.

“For goodness’ sake, everybody has to use the bathroom,” Brewer said.