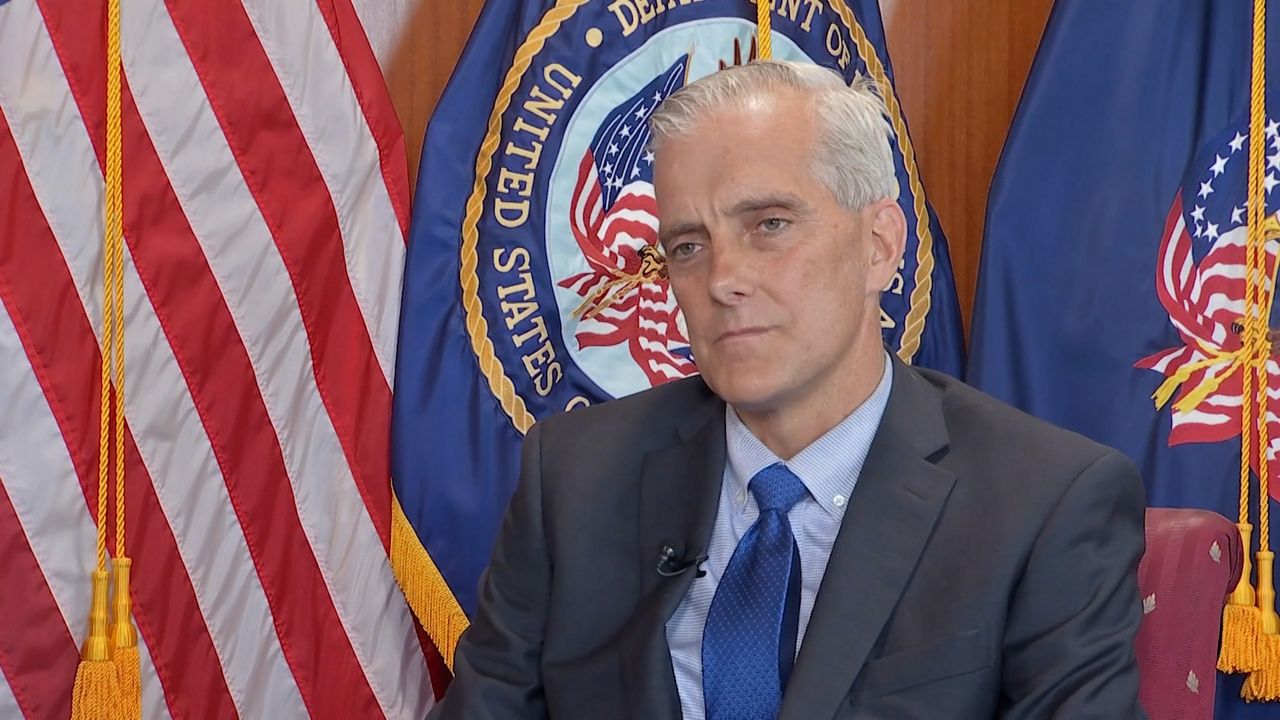 With Memorial Day weekend around the corner, Veterans Affairs secretary Denis McDonough is encouraging all Americans to take a moment to remember the men and women who have lost their lives while serving in the military.

“It's important for each of us to take a moment this weekend, to recognize that the freedoms that we, maybe, too oftentimes take for granted and the security that we all enjoy [...] (are) because of the sacrifices that veterans have made now over generations,” McDonough told Spectrum News.

“That's what this weekend is all about – yeah, kicking off the summer, getting together with friends and family, you know, taking a moment to stop and smell the flowers,” he added. “But also, let's not forget to remember that we can do all those things because of the sacrifices of those generations of veterans. And what they did under, in so many cases, just terrible circumstances.”

McDonough, his wife and three children will visit a veterans cemetery near Washington, D.C. to pay their respects over the weekend. On Monday, McDonough will travel to the New Hampshire State Veterans Cemetery in Boscawen, where the 52-year-old secretary will preside over a wreath-laying ceremony. The VA is tasked with giving health care and other benefits to those who have served, and McDonough said the New Hampshire site is an example of a “collaboration we have across the country with states” to support veterans even after they have passed.

Nearly 4.5 million veterans and service members are interred at the nation’s VA cemeteries or other VA-funded sites.

“I'll be visiting one of their state run cemeteries, which the federal VA helps to fund,” McDonough said. “But importantly, I'll be there with the whole delegation – with the governor, with the federal senators, Congress people – it's a good bipartisan delegation, doing good work on behalf of our vets. I'm pleased to be able to be part of it.”

The VA is hosting similar events at more than 120 national cemeteries across the country between May 28 - May 30. Because of the COVID-19 pandemic, they will be the first such Memorial Day ceremonies open to the public since 2019.

Though the VA advises anyone planning to attend a Memorial Day gathering to consult local health guidance, McDonough said the department is “encouraging people to come out” for the (largely outdoor) events.

“Hopefully across the country, the weather cooperates to make it a comfortable, safe environment,” he said. “We're encouraging people to come out. We know that families get great sustenance from this. And so we're looking forward to seeing people at our national cemeteries.”

McDonough himself is not a veteran, and said he wants to go the “extra mile” to recognize the sacrifices made by veterans, given his position – and added he stays grounded by remembering all of his close family, friends and colleagues who have served in various branches of the U.S. Armed Forces.

He also has previous career experience in Washington, having served both as chief of staff at the National Security Council and then as deputy national security adviser in the Obama administration.

“I spent a lot of time when I was a senior national security official traveling in and out of Iraq and Afghanistan. I don't mean to say that I'm a vet – I’m not,” McDonough said of his previous government service. “But I do mean to say that I think that's been a part of my life here, those conflicts, and so I try to make sure that I keep my connections with my friends and vets from that era. I make sure that we're living up to the great examples each of them set for us.”

As Americans pause this Memorial Day to remember those who have made the ultimate sacrifice during service, McDonough also encouraged people to take the time to speak with veterans about their personal stories.

A simple conversation can have a profound impact on an individual, McDonough said, recalling his own recent interaction with a veteran of the Vietnam War at a VA hospital in Ohio.

All VA-hosted cemeteries will remain open from dawn until dusk this coming weekend. At some, volunteers will place American flags on veterans’ headstones in the days leading up to Memorial Day. Individuals can also leave tributes to fallen service members on the Veterans Legacy Memorial website.