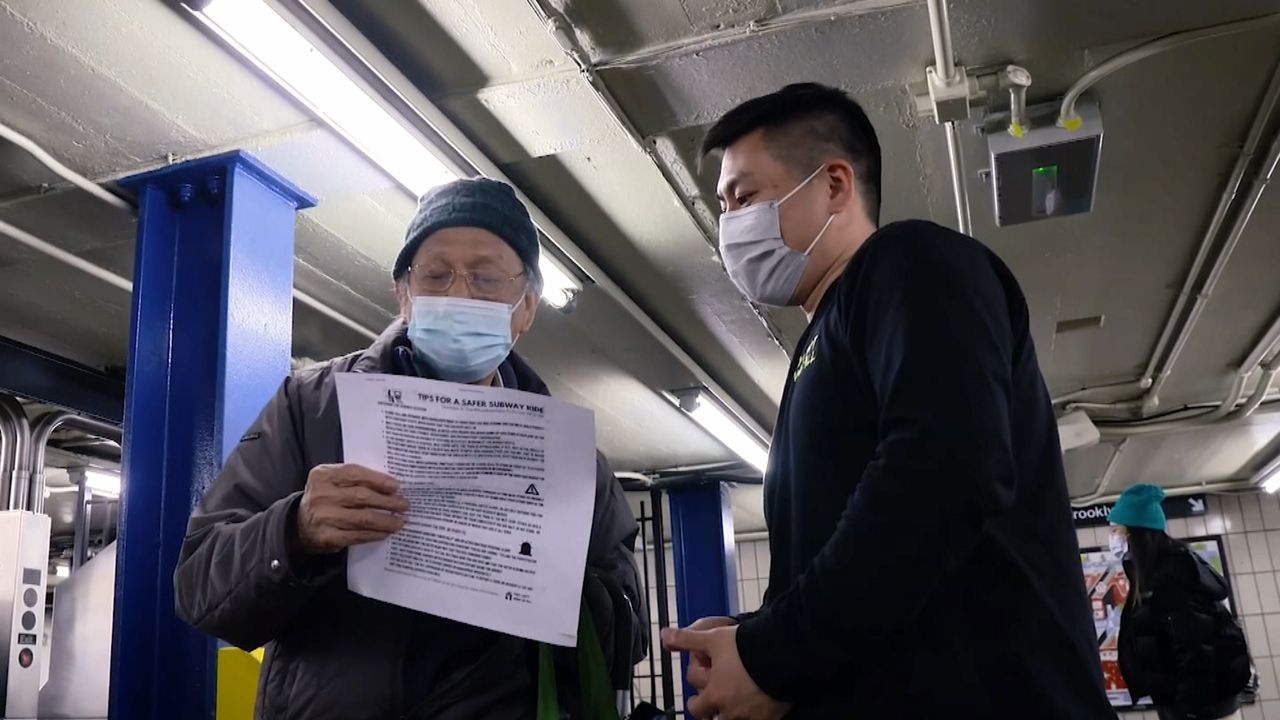 Every two weeks, volunteers from T.C.B.U.A., an acronym for They Cant Burn Us All, gather at the Grand Street subway station in Chinatown to be a reassuring presence amid anti-Asian hate attacks. (NY1/Lori Chung)

Every two weeks a group of volunteers gathers at the Grand Street subway station in Chinatown. Wearing yellow armbands that set them apart from the crowd, they offer to carry bags or to just be a helping hand to elderly riders.

“The Asian seniors themselves, even with all these Asian hate stuff [and] people getting attacked, they’re still taking the subway to the city,” Fulton Hou said, who helps to lead the group that’s trying to be a reassuring presence in a community weary of the rash of anti-Asian attacks in the city.

“Even the first instances where an Asian women was attacked was here at Grand Street station back in 2020, and there's just been so many where someone's been pushed down the staircase at a subway station," Hou said.

The organization is called T.C.B.U.A., an acronym for They Cant Burn Us All. The death of Michelle Go in Jan. inspired their subway outreach. The 40-year-old was pushed onto the tracks at the Times Square 42nd Street station.

“The name itself originates from back in 2020. There was an 89-year-old Asian grandmother who was set on fire in Brooklyn. At the time, people spoke about the rise of anti Asian violence and I don’t think there was any case as egregious as that one yet,” Hou said.

For Raymond Yu that was a tipping point. The rapper and activist also goes by the name China Mac. He founded the group by issuing a call to action on his YouTube page.

“Growing up, I was always taught not to speak up. I was taught to just mind my business,” Yu said. “When I saw something happening and all these occurrences keep on happening, I saw that nobody else was speaking up.”

China Mac is overcoming a troubled past as a former gang member raised on the streets of Chinatown who served a prison sentence for attempted murder. The experience taught him hard lessons.

And, he also learned the value of building solidarity across marginalized communities which is one of the organizations stated goals.

“Right now, it’s more personal because for example I’m seeing Christina Yuna Lee, her memorial is right there,” Zhang said. “For me, I feel like it’s my brothers and sisters, even if we’re not necessarily related.”

Along with the street campaign, TCBUA is part of an effort to get Asian language accessibility on the Citizen app to keep the community informed. And, as a young organization they’re still working out the logistics of recruiting more volunteers that can be a ongoing presence here and in other parts of the city.

“I think that the seniors do appreciate it and in the past few weeks that we’ve been out here they’ve expressed gratitude for it,” Hou said.

“I think about my grandpa all the time,” Hou said. “I just want to do him proud. He’s not here now but I think he would have wanted me to help out the community.”