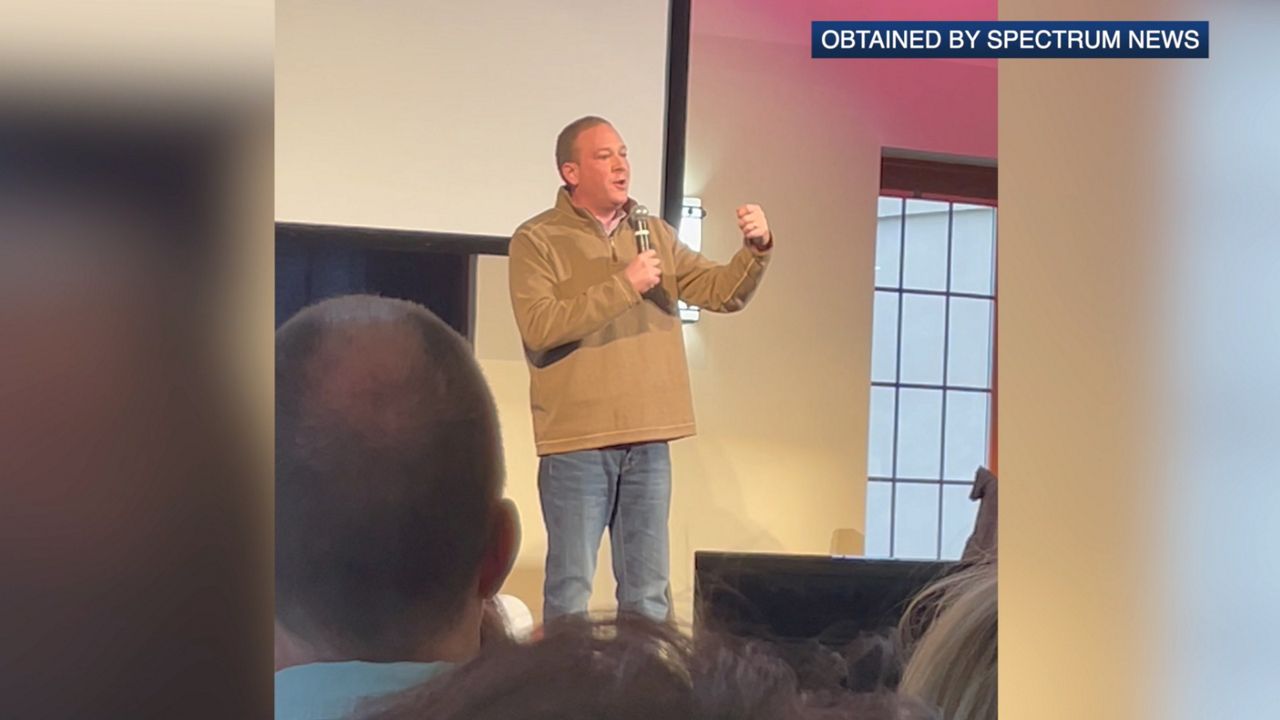 Gun rights positions held by a New York Republican making a bid for governor are now under scrutiny in light of the mass shooting in Buffalo.

He touts his A-rating from the NRA, says people "have a right to stand your ground," and urges the U.S. Supreme Court to overturn New York’s strict requirements for carrying a concealed gun.

“[You] should not have your right taken away by the government,” he tells the crowd at the campaign stop, which took place in the weeks before Saturday’s attack.

He also raises concerns about so-called ‘red flag laws.’ Advocates say that last weekend’s massacre in Buffalo could have been averted had the state’s “red flag law” been followed.

“We should not have ‘red flag laws’ … I mean, it's a very slippery slope that could be targeting you law-abiding gun owners,” Zeldin says in the video clip.

"We should not have 'red flag laws' ... I mean, it's a very slippery slope that could be targeting you law-abiding gun owners."

‘Red flag laws’ allow for weapons to be removed from a person deemed to be a threat to him or herself or others.

The law has been implemented extensively in Zeldin’s own Long Island congressional district.

Judges in Suffolk County have issued more extreme risk protection orders than anywhere else in the state. All told, 116 orders of protection were issued in the county between August 2019 and May 2022, plus 187 temporary orders, according to data from the New York State Unified Court System.

In a statement to Spectrum News NY1, Zeldin clarified his position on ‘red flag laws,’ saying they should not “target law-abiding New Yorkers.”

Here's a statement from Zeldin that I received Wednesday when I reached out to see if he had any further comment in light of the #Buffalo shooting.

He reiterates many of his gun policy arguments in the video, and takes aim at Hochul/Democrats. pic.twitter.com/mlL4mOHmd2

However, the 18-year-old charged in the Buffalo rampage reportedly bought the weapon he used legally.

Zeldin further said the suspect in Saturday’s shooting should not have “have had access to any weapons at all.”

A Siena poll conducted in early 2018 found that roughly 6 in 10 New Yorkers backed the SAFE Act. And 65% of New Yorkers supported a national ban on the sale of assault weapons.

Asked about Zeldin’s positions and what they would mean if enacted, Rebecca Fischer, who serves as executive director of New Yorkers Against Gun Violence, offered a warning.

“New Yorkers need a governor who will fight to end the gun violence epidemic and protect our communities, not perpetuate it,” he continued.

Spectrum News NY1 reached out to the other candidates in the gubernatorial race to see if they had a response to Zeldin's comments.

In a statement, Republican Harry Wilson said, “I have never waivered in my support of the 2nd Amendment. Since Lee Zeldin changes his positions depending on the audience, New Yorkers have no idea where he stands or what, if anything, he’ll fight for.”