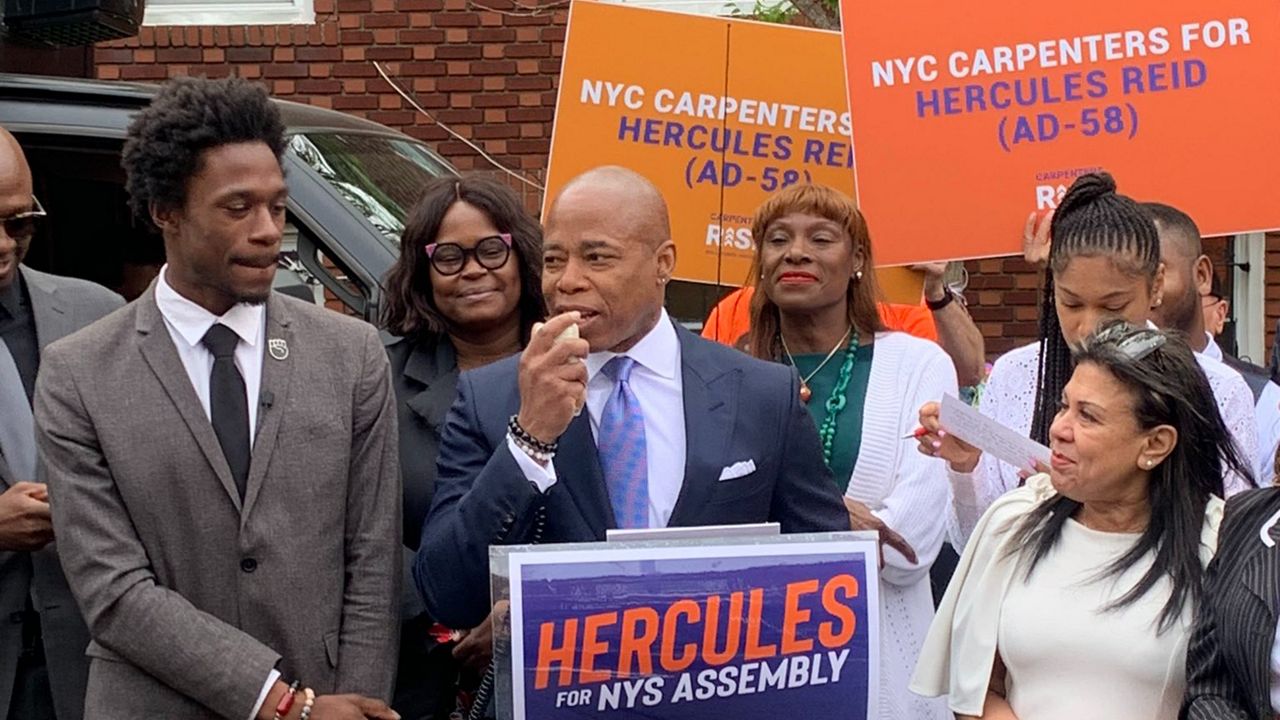 Mayor Eric Adams came out for Hercules Reid Wednesday, who is not the chosen candidate of the Brooklyn County Democratic Committee. (Spectrum News NY1/Zack Fink)

Adams endorses in Assembly special election, but not the candidate backed by Brooklyn Democrats

Mayor Eric Adams stepped into the race for the 58th Assembly District in Brooklyn on Wednesday, throwing his support behind candidate Hercules Reid, who used to work for him

“We need partners like Hercules,” the mayor said at a press conference. “Hercules Reid is the right person for the right time to lead our city and state in the right direction!”

The 58th District includes East Flatbush, parts of Canarsie and Brownsville. It was vacated earlier this year when Assemblyman Nick Perry was appointed ambassador of Jamaica.

.@NYCMayor arrives in Brooklyn to endorse @hercules_reid for State Assembly. Reid is running to replace Nick Perry who was tapped to serve as U.S. Ambassador to Jamaica. pic.twitter.com/YFKIKb5Y3O

“This was already an emotional morning for me because a friend, a mentor, decided that I was worthy enough to endorse me,” Reid said.

.@hercules_reid once worked for @NYCMayor who is now offering his support to the candidate. Reid is facing @MoniqueForNY who has won the support of the Brooklyn County Committee pic.twitter.com/MAQtmjgHDS

The special election will be held on May 24, about a month before the regular primary. The powerful Brooklyn County Democratic Organization is backing another candidate, Monique Chandler-Waterman, who also has the support of the Working Families Party.

Chandler-Waterman declined to speak with us.

“I realized there was an unmet need in my community for a woman like myself,” Chandler-Waterman says directly to the camera in a video she made when she ran for City Council. “Those who work outside a traditional 9 to 5 work schedule didn’t have access to child care, so I started right here in my childhood home a 24-hour child care facility.”

Reid said he’s not bothered by losing out on county support.

“I made a conscious decision. We, as I mentioned, are tired of business as usual. And anybody who understands the county committee process understands that it’s not set up for young, 29-year-olds like me that are not inside the process to win. So why be a part of a system I can’t win?” Reid said.

Mayor Adams has previously been aligned with Democratic County leader Rodneyse Bichotte, who also declined to speak with us, when we asked if this race is splitting Brooklyn Democrats.