More than a dozen Republican-led states will soon have near bans on abortion now that the Supreme Court has reversed the landmark 1973 Roe v. Wade case that had protected a woman’s right to abortion. In some states, the so-called “trigger laws" have been on the books for nearly two decades awaiting such a moment.


The U.S. Supreme Court ruled Friday to uphold a Mississippi law banning nearly all abortions after 15 weeks of pregnancy, overturning Roe in the process.

In the majority opinion, Justice Samuel Alito wrote that Roe was “wrong from the start” and “must be overruled.”

The trigger laws were designed to be enacted if the Supreme Court ever struck down the federal precedent that granted the right to seek an abortion. According to the Guttmacher Institute, 13 states already have such laws that will now ban abortion in varying degrees.

Some will take effect immediately, while others include waiting periods ranging from a few days to a month from the day Roe was struck down.

Meanwhile, Alabama, Arizona, West Virginia and Wisconsin retain their unenforced pre-Roe bans, and even more states will likely create legislation to ban or severely restrict abortions, said the Guttmacher Institute, a research and policy organization focused on sexual and reproductive health and rights. A handful of other states have both trigger laws and pre-Roe bans still on the books.

The Roe ruling defined fetal viability as the “interim point at which the fetus becomes … potentially able to live outside the mother's womb,” typically between 24 and 28 weeks of gestation. Many states ban abortion before that definition of viability, at 20 weeks after fertilization, or about 22 weeks of gestation — the time since the patient's last menstrual period.

Arkansas Gov. Asa Hutchinson signed the state’s triggered abortion ban into law in early 2019, after a majority-Republican Legislature passed the measure. The law will ban all abortions except for medical emergencies.

In Arkansas, abortion is currently banned after 20 weeks of pregnancy except in the case of rape, incest or compromised patient health. A federal judge in July 2021 blocked the latest attempt to restrict nearly all abortions in the state.

Idaho lawmakers passed the state’s so-called trigger provision as part of a “fetal heartbeat” bill signed into law in 2020. It will ban all abortions except in the case of rape, incest or to protect the life of the mother. It will take effect in 30 days now that Roe has been reversed.

Idaho became the first state to pass a law similar to Texas’ ban on abortions after about six weeks of pregnancy, which allowed regular citizens to enforce the ban with lawsuits. It was blocked by the state’s Supreme Court before it was set to go into effect in April.

For now, abortions are legal until a fetus becomes viable, which is defined as between 24 and 28 weeks of pregnancy.

Abortion will be banned immediately in Kentucky now that Roe has been overturned, according to a law that became final in 2019.

Last month, a federal judge extended a ban on a newer Kentucky law that essentially made abortions illegal because the state’s last two abortion clinics said they could not comply with the new requirements listed in the law. It also sought to ban abortions after 15 weeks and require women to consult with a doctor before receiving an abortion pill.

Democratic Gov. Andy Beshear’s veto of the law was overturned by a Republican Legislature. In Kentucky, abortions had been banned after 20 weeks of pregnancy, except in the case of a risk to a mother’s health. 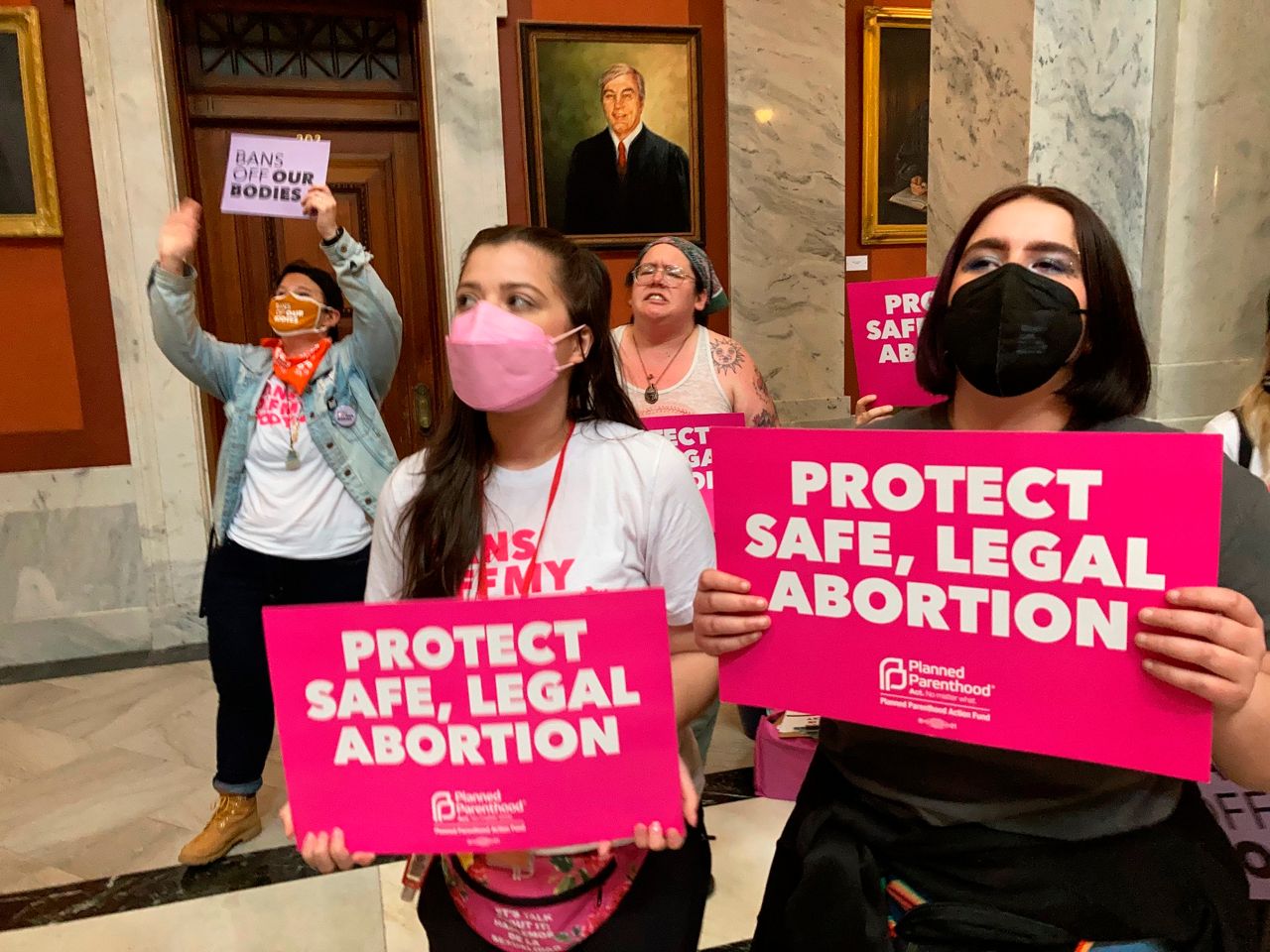 Louisiana’s trigger law will also go into effect immediately, and it will ban any abortions except those that are necessary to save a mother’s life.

Before Friday’s ruling, abortion was legal up through the 20th week of pregnancy.

Mississippi’s near ban on abortions after 15 weeks of pregancy was the law at issue in Friday’s ruling that led to the end of Roe v. Wade.

It was the third state to pass a trigger law when it did so in 2007, according to Mississippi Today, allowing a ban on abortions within 10 days of a Supreme Court decision except in the case of rape and risk to a mother’s life.

Missouri’s trigger law was passed in 2019 and will ban all abortions, with no exceptions for rape or incest. The only exception is in the case of a medical emergency.

Missouri has some of the most restrictive laws among states, and it only has one abortion clinic left. In 2019, state legislators sought to ban abortions after eight weeks of gestation, but that was blocked in court.

State lawmakers now want to pass a new, sweeping law that would criminalize mail-order abortion pills, defund Planned Parenthood and allow wrongful death lawsuits from family members if a baby is born after an attempted abortion and is then injured or dies.

Abortions had been legal through 20 weeks of pregnancy in Missouri.

North Dakota first approved its trigger law in 2007, which will ban abortions in most instances. The law provides limited exceptions in the cases of pregnancy caused by rape, incest or “sexual imposition,” or when determined by a medical professional to be “necessary … and was intended to prevent the death of the pregnant female.”

Individuals who perform an abortion, other than the pregnant person, can face a felony charge. 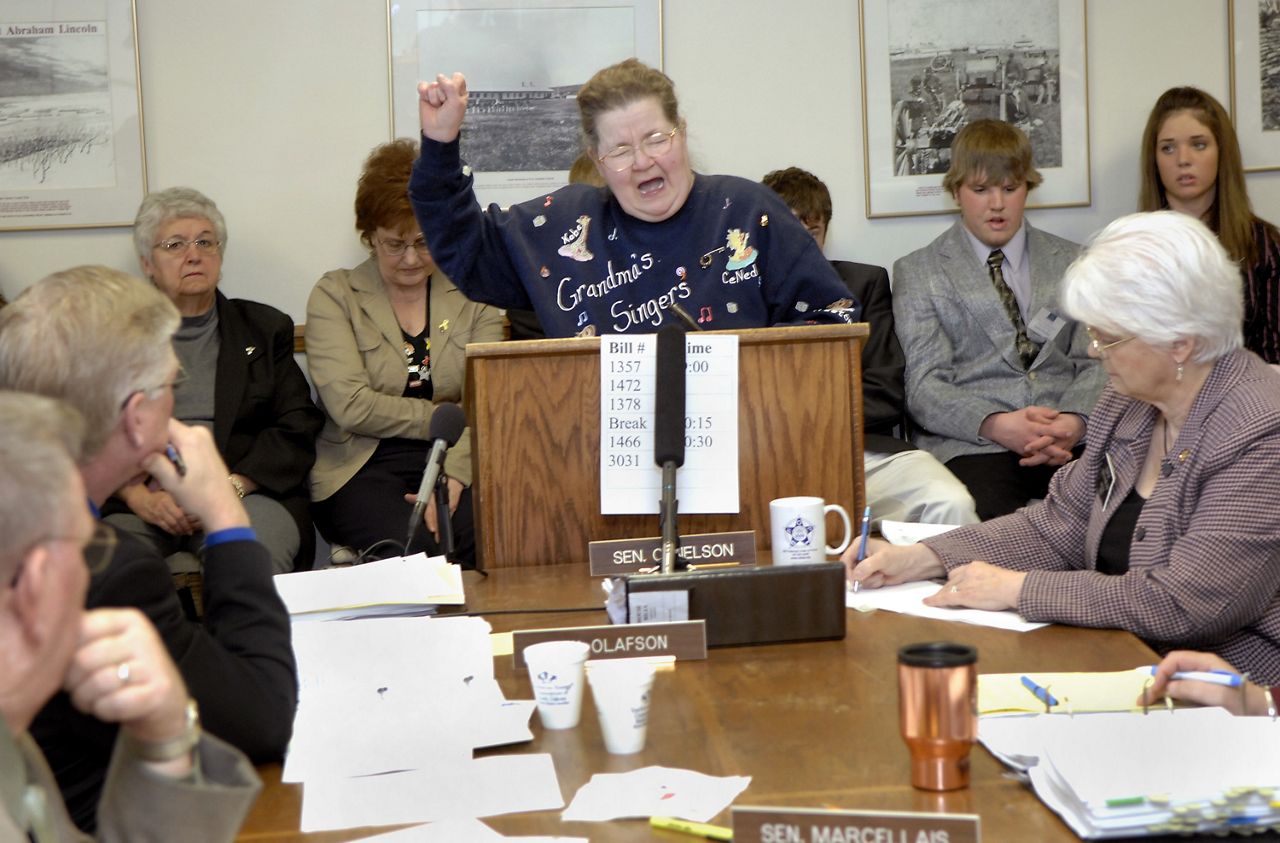 FILE - Christy Zentz testifies before the Senate Judiciary Committee at the Capitol in Bismarck, N.D., Tuesday, March 13, 2007, in favor of legislation that would prohibit abortions in North Dakota, except to save the life of the mother. (AP Photo/Will Kincaid)

Oklahoma made a number of steps to further restrict abortion in recent weeks, including updating a trigger law that was already on the books to fully ban the procedure if or when the Supreme Court  “overrules in whole or in part” either Roe v. Wade or Planned Parenthood v. Casey.

Last month, after a draft of the ruling overturning Roe was leaked to the press, Gov. Kevin Stitt signed a bill banning abortions from fertilization and allowing private citizens to sue abortion providers. The new law makes exceptions for medical emergencies or if the pregnancy was a result of rape, sexual assault or incest and reported to law enforcement.

South Dakota’s so-called trigger law has been prepared for nearly two decades, having passed in 2005 to ban nearly all abortions statewide “effective on the date” that the Supreme Court turned the abortion debate back to the states.

The law prohibits all abortions unless “there is appropriate and reasonable medical judgment that performance of an abortion is necessary to preserve the life of the pregnant female.” Those in violation of the law could face a Class 6 felony charge.

If this report is true and Roe v. Wade is overturned, I will immediately call for a special session to save lives and guarantee that every unborn child has a right to life in South Dakota. https://t.co/oIiGibCP7B

After the Supreme Court ruling was leaked last month, Gov. Kristi Noem tweeted she would “immediately call for a special session to save lives and guarantee that every unborn child has a right to life in South Dakota,” although the ban was designed to go into effect automatically.

Abortion had been legal in the state up to 20 weeks after fertilization.

Tennessee Gov. Bill Lee signed the “Human Life Protection Act” in 2019, which will ban nearly all abortions in the state 30 days after the Supreme Court overturns Roe v. Wade.

The bill will ban all abortions except when “necessary to prevent the death of pregnant woman or prevent serious risk of substantial and irreversible impairment of major bodily function.” Women seeking abortions will not be criminally prosecuted, while doctors who perform the procedure could face felony charges.

Currently, abortions in Tennessee are only legal before a fetus is deemed viable, or in the case of likely death or serious injury to the mother.

Texas already has one of the nation’s strictest laws against abortion, having passed the Heartbeat Act last year, which prohibits abortions when a fetal heartbeat can be detected – typically around six weeks of gestation.

Last June, Texas also adopted House Bill 1280, which bans all abortions – with no exceptions for rape or incest – beginning at the moment of conception. It includes limited exceptions if the life of the mother is at stake, or if there is risk of “substantial impairment of major bodily function.”

Should an “unborn child” die as a result of an abortion, doctors who perform the procedure could face a first-degree felony, punishable by up to a $100,000 fine and life in prison.

The bill will be enacted within 30 days of Roe being ended.

In March 2020, then-Gov. Gary Herbert signed a sweeping provision into law that would restrict abortions in nearly all cases as soon as the Supreme Court overturned Roe v. Wade.

The law will have limited exceptions, including high likelihood of the mother’s death or a “serious risk of substantial and irreversible impairment of a major bodily function,” or should two physicians submit, in writing, that the fetus has a lethal defect or that the woman is pregnant as a result of rape of incest. Individuals who, under the new law, illegally terminate or assist in the termination of a pregnancy could face second-degree felony charges, punishable with up to 15 years in prison and a $10,000 fine.

Abortions had been allowed in Utah only until the fetus was “viable” or in the event that the life of the mother was in danger, or of an irreversible fetal anomaly. The authorized clinics in the state performed abortions up to 21 weeks and six days after a mother’s last period.

In one of the nation’s more recent adoptions of a trigger law, Wyoming Gov. Mark Gordon on March 15 signed a law that would ban abortions in his state within five days of the Supreme Court overturning Roe v. Wade.

The law will change a number of aspects of Wyoming’s abortion law. Currently, abortions are allowed up until “the embryo or fetus has reached viability,” with except in cases “when necessary to preserve the woman from an imminent peril that substantially endangers her life or health, according to appropriate medical judgment.”

Abortions at any point in the pregnancy will soon only be allowed in the state in cases of preserving a woman “from a serious risk of death or of substantial and irreversible physical impairment of a major bodily function, not including any psychological or emotional conditions, or the pregnancy is the result of incest … or sexual assault.”