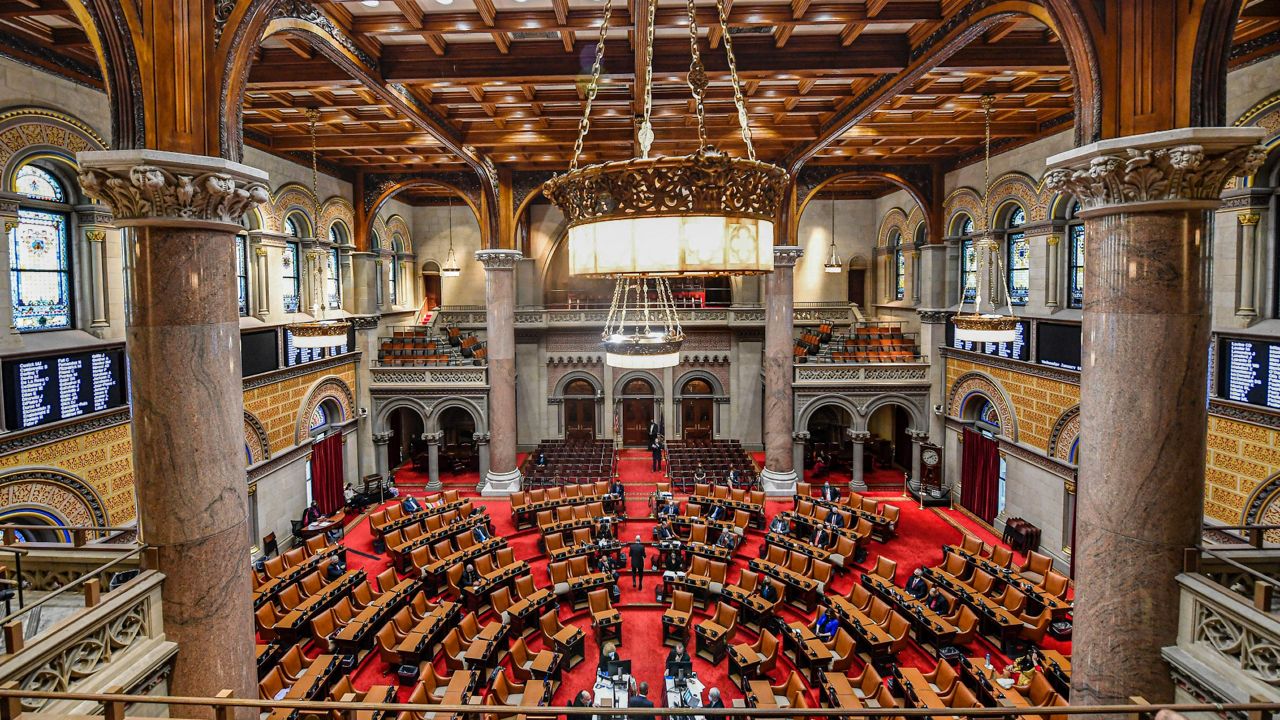 View of the New York state Assembly Chamber as members meet on the opening day of the 2021 legislative session at the state Capitol in Albany, N.Y. Wednesday, Jan. 6, 2021, in Albany, N.Y. (AP Photo/Hans Pennink, File)

The court has spoken. And now New Yorkers will be asked to go to the polls in the middle of August to vote in the primaries for congress and state Senate.

A June primary is already set for statewide elections, including governor. And while there had been some discussion about moving it back to align with the new August 23 primary date, Gov. Kathy Hochul put that speculation to rest on Friday.

“There is an election that will occur at the end of June,” Hochul said at an unrelated event in Albany. “That is established. That is being certified. That is the plan right now, to continue with a June election.”

But more questions remain, including what the process will be for gathering signatures to qualify for the ballot with a new electoral calendar. Hochul says she still doesn’t have those answers.

Per @mikemurphy33 Steuben County Supreme Court has granted Democrat’s request to extend the timeline for submitting new congressional lines to tomorrow and agreed to move up senate lines submission to May 4 from May 5, as they requested

“I assure you that after working on this over the weekend, we will have more information available on what the future will bring probably on Monday or Tuesday. So, I will be able to answer all of your questions on those topics at that time when we have more information to share,” said Hochul.

Democrats, meanwhile, are getting attacked by opponents who say their gerrymandering led to this mess, which threw New York’s election process into uncertainty.

“We were looking at this issue and this case on the merits, not on the politics,” said Republican State Senator Mike Martucci. “And when you look at it on the merits, I believe our state’s highest court came to the right decision. And as to the question of what is happening around Democrats? Clearly they are in disarray.”

“The courts have never really weighed in on redistricting over the many years, and there have been legal challenges every ten years, forever, certainly in modern times there have been legal challenges. And the courts have traditionally stayed out of it. And my guess is Democrats we’re banking on the same passivity or conservative approach,” said Blair Horner of the New York Public Interest Research Group.

Lawmakers are considering a bill that would allow Hochul to drop Brian Benjamin from the ballot for the June primary. Benjamin resigned as lieutenant governor earlier this month over a corruption scandal.

Sources say @NYSenDems expected to conference this afternoon on a bill to remove @BrianBenjaminNY from the June ballot. The expected program bill would be silent on whether a replacement could be picked by @KathyHochul

Sources say Democrats in the senate and assembly are expected to pass a bill as soon as next week to change the law and allow his name to be taken off.