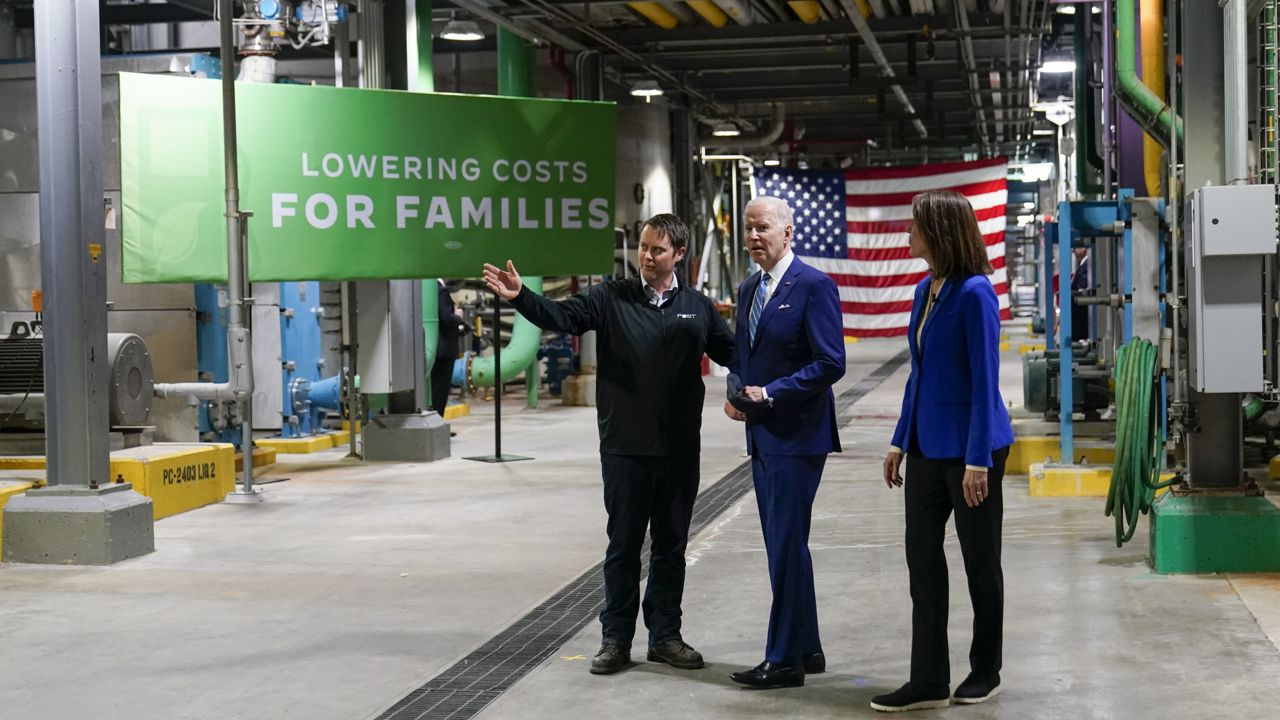 President Joe Biden on Tuesday announced a national emergency waiver that will allow for the sale of E15 — fuel which contains a blend of 15% ethanol and 85% gasoline — this summer in an attempt to reduce fuel costs for Americans amid elevated gas prices.

“I'm here today because homegrown biofuels have a role to play right now, right now, as we work to get prices under control to reduce costs for families,” Biden said during a visit to the POET Bioprocessing plant in Menlo, Iowa.

According to the White House, POET is the largest domestic producer of renewable fuel made from corn, with an annual output capacity of 3 billion gallons of bioethanol – around 20% of the United States’ roughly 15 billion gallons produced per year.

Tuesday’s announcement aims to “spur the development of homegrown biofuels” like those produced at POET Bioprocessing, which will be “critical to expanding Americans’ options for affordable fuel in the short-term and to building real energy independence in the long-term by reducing our reliance on fossil fuels," the White House said in a statement.

“I want to see facilities like this all over the Midwest, and here's why: first, it supports farmers and the farm economy,” Biden said following a tour of the POET plant. “Second, it creates good-paying jobs. It’s estimated there are over 400,000 jobs directly and indirectly supported by this industry nationwide. There's a lot of people, that's a lot, a lot of paychecks and good, decent paychecks.

E15 contains up to 15% ethanol compared to most gasoline in the U.S., which contains about 10% ethanol. Currently, E15 cannot be sold in most of the country from June 1 to Sept. 15 due to air pollution rules.

The White House estimates that "E15 can save a family 10 cents per gallon of gas on average," with many stations selling the fuel at an even greater discount.

According to AAA, the average price of a gallon of regular gasoline nationwide is $4.09, down significantly from the record high of $4.331 reached last month after Russia's invasion of Ukraine.

“On June 1, you're not going to show up at your local gas station and see a bag over the pump that has the cheapest gas. You're going to be able to keep filling up with E-15,” Biden said, later acknowledging: “But it’s not going to solve all our problems. It's going to help some people and I'm committed to doing whatever I can to help.”

"Your family budget, your ability to fill up your tank, none of it should on hinge on whether a dictator declares war and commits genocide a half a world away," Biden said.

Elected officials on both sides of the aisle have urged President Biden to take action to bolster domestic energy production in the wake of Russia’s invasion of Ukraine, which spiked gas prices to record highs across the country and around the world.

“President Biden is visiting [an] Iowa ethanol plant tomorrow,” Grassley wrote on Twitter on Monday. “I’ve made repeated calls for E15 year round because it’s good for environment, good for national security, good for farmers.”

Grassley's counterpart in the Senate, Iowa Sen. Joni Ernst, said that the two of them "have been calling for this for months."

"As gas prices continue to rise, I hope the president will take this badly-needed step to help consumers and our rural economy," she wrote on Twitter.

Ernst and Grassley signed a letter with more than a dozen other lawmakers last month, Democrats and Republicans, urging Biden to take this action, calling it a "no-cost, immediate step" in order "to help curb rising energy costs and displace banned Russian oil imports."

Since early last year, @ChuckGrassley & I have been pushing this administration to lift the ban on E15 by the summer driving season—and at long last, the president has relented. https://t.co/8pZTg2bYGE

“Since early last year, Senator Grassley and I have been pushing this administration to lift the ban on E15 by the summer driving season – and at long last, the president has relented," she added. "Home grown ethanol is a cleaner, cheaper choice for consumers, and Iowa’s biofuel producers are ready to meet the demand."

Grassley added the move "is a step toward energy independence, lower gas prices and cleaner air."

Biden banned Russian oil imports in early March as a consequence for Russia's invasion of Ukraine. Congress passed a Russian oil ban of its own last week, codifying President Biden's action in a widely bipartisan vote. Since then, the White House has attempted to brand rising gas prices as "Putin's Price Hike" and the administration has sought to mitigate its impacts on the American consumer, including the historic release of 1 million barrels of oil per day from the country's strategic petroleum reserve.

"The focus here is also on making sure we are meeting the near-term supply emergency and doing so by leveraging homegrown fuels," a Biden administration official said.

The announcement came ahead of the release of the Consumer Price Index for March, the first which reflected Russia's invasion of Ukraine and its impact on the global economy. Inflation rose 8.5% in March compared to a year ago, driven largely by food and gas prices, both of which were greatly impacted by the invasion.

"Since President Putin’s military build-up accelerated in January, average gas prices are up more than 80 cents," Psaki said Monday. "Most of the increase occurred in the month of March, and at times gas prices were more than a dollar above pre-invasion levels. Certainly this data will be a reminder of the need to do something and take additional steps."

Despite its global nature, inflation has emerged as a major potential issue in the 2022 midterm elections, with Republicans hammering Democrats and the White House over price increases.