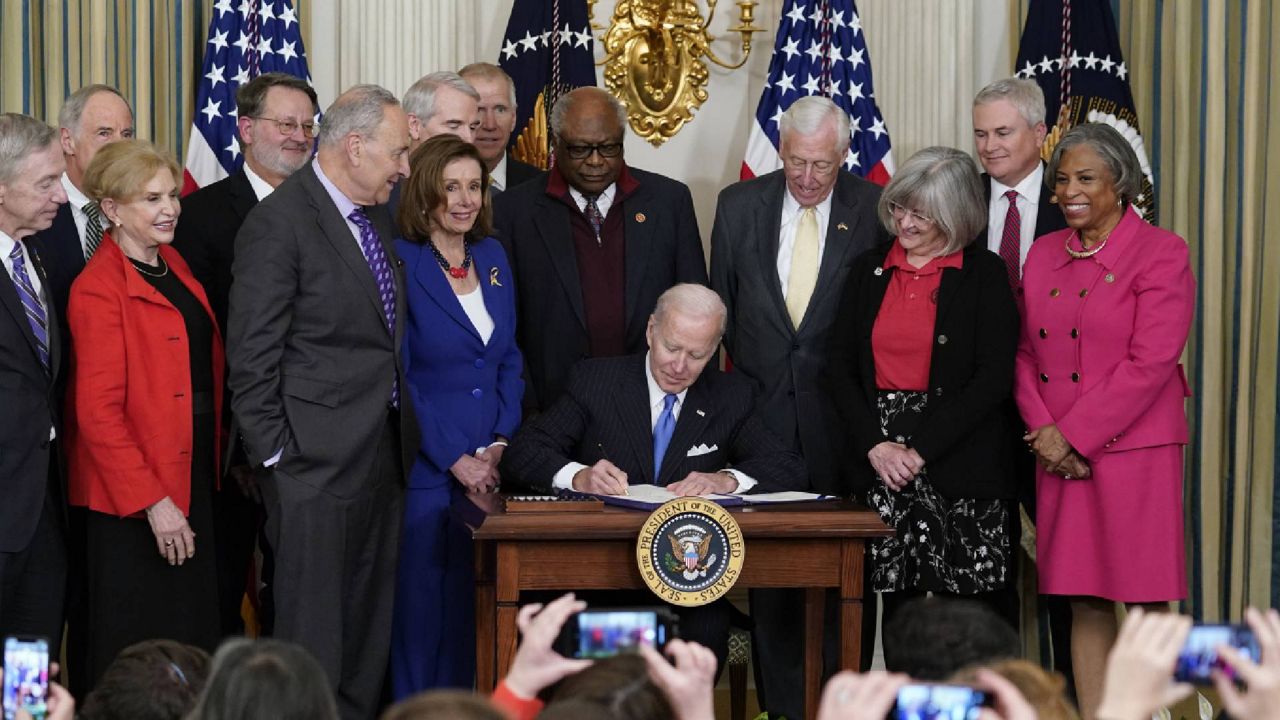 President Joe Biden signs the Postal Service Reform Act of 2022 in the State Dining Room at the White House in Washington, Wednesday, April 6, 2022. The long-fought postal overhaul has been years in the making. It comes amid widespread complaints about mail service slowdowns. (AP Photo/Susan Walsh)

President Joe Biden on Wednesday signed into law a bill to reform the U.S. Postal Service that passed Congress last month with bipartisan support, codifying changes that could save the agency up to $50 billion in the coming years and solidify a six-day mail delivery schedule.

One major change in the bill is an end to the so-called “pre-funding mandate,” which required USPS to pay for its retirees’ health benefits 75 years ahead of time. The Postal Service owed the U.S. government billions of dollars under the mandate out of its own revenue, and the USPS has suffered 14 straight years of losses.

The Postal Service Reform Act  — which passed the Senate 79-19 and the House 342-92 in a show of rare bipartisan support — comes after Americans have increasingly relied on the mail during the pandemic and the 2020 election, while many have also noted the agency’s slower delivery service.

In the fall for example, the USPS adjusted its delivery standards for First Class Mail to take up to five days, up from one to two days, depending on where it’s delivered.

“Today, we enshrine in law our recognition that the Postal Service is fundamental to our economy, to our democracy, to our health and the sense of who we are as a nation,”  the president said Wednesday before signing the legislation.

“This bill recognizes the Postal Service as a public service, and we're ensuring that it can continue to serve all Americans for generations to come.”

The president of the American Postal Workers Union, Mark Dimondstein, is also in favor.

“It will go a long way in righting the ship, fixing the financial problems and making sure that the Postal Service gets back to serving the people in the proper, reliable and efficient manner that the people are promised under the law,” he said in an interview with Spectrum News on Wednesday. “We’re excited. This is a big step forward.”

But Dimondstein admitted the bill does not solve every challenge.

The APWU president said he had hoped for more in the bill to fix mail delivery times, though he said it was important not to risk its passage and that he’ll continue to push for Congress to address the issue.

“To get this bill passed, that was not in the cards,” he said. “This is a time that people do expect things to be quicker and sooner, and so we certainly are going to continue to work to improve the service standards.”

The legislation will also require USPS retirees to enroll in Medicare, something that is estimated to save the postal service more than $22 billion over the next ten years due to lower premiums. And the agency will save up to another $27 billion due to the end of the pre-funding requirement.

Plus, it makes permanent a six-day-a-week mail delivery schedule and will establish an online “dashboard” that would be searchable by ZIP code to show how long it takes to deliver letters and packages.

As far as what you pay for mailing a letter or package, the legislation is not expected to cause prices to drop anytime soon, but it could prevent future increases in mail costs due to overall savings, Dimondstein said.

The USPS increased prices slightly last year and could again this summer, according to current proposals.

They may continue to increase as part of a controversial ten-year plan presented by Postmaster General Louis DeJoy, a major GOP donor who was appointed by the agency’s board of governors, which is dominated by Trump appointees.

His plan would stabilize the service’s finances with steps like additional mail slowdowns, cutting some offices’ hours and perhaps higher rates.