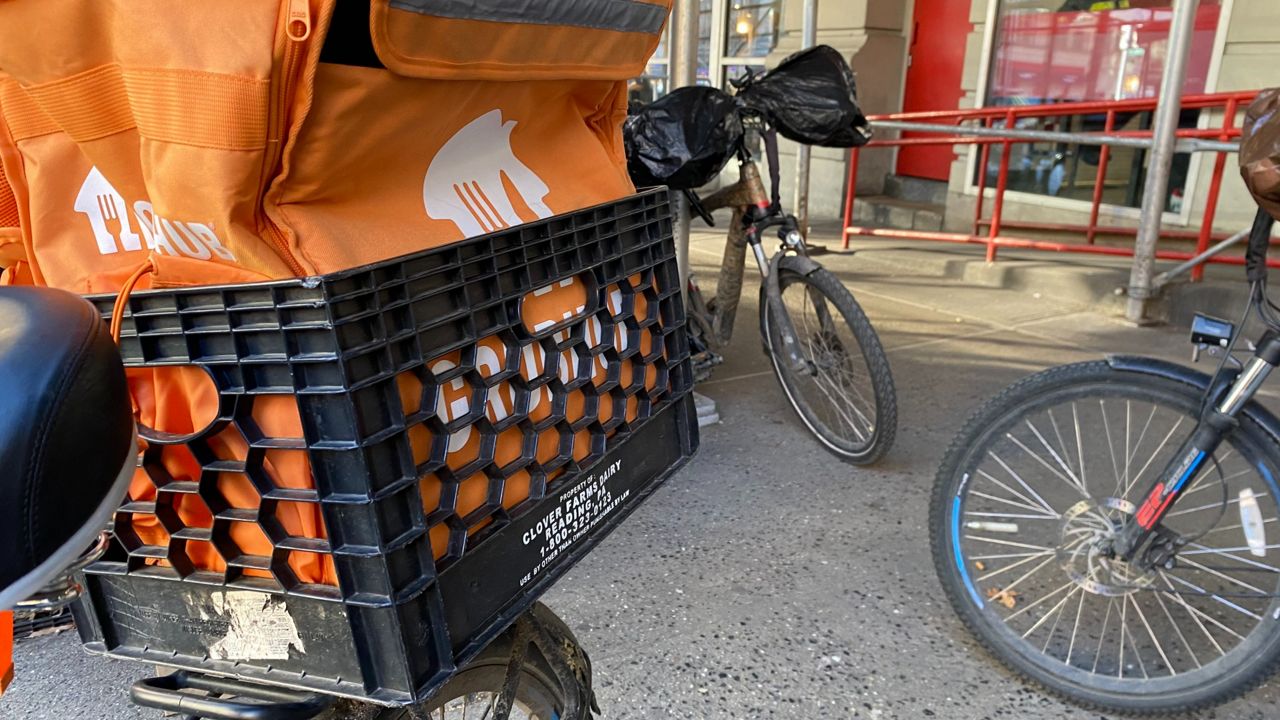 The Department of Transportation, which regulates sidewalks, says cyclists older than 13 are barred from riding on sidewalks in the city. (NY1/Stef Manisero)

“You wake up in the morning, you come out and there’s an electricity flowing,” Riservato said. “It’s different than any other place.”

He also loves the way the city is built for pedestrians.

“I’m out every day for two or three or four hours,” said Riservato.

But lately, he says his daily walks feel different.

He says delivery workers on bikes are clogging up city sidewalks. He cheekily calls the stretch of Broadway between 110th and 111th Street, “one of the busiest parking lots in the city."

“You can hardly walk through some sidewalks because they park there,” Riservato said of the bikes.

He said the bikes aren’t just a nuisance, but dangerous.

“The pedestrians, I feel, are being threatened and hurt,” Riservato said.

Videos and tweets on social media show other New Yorkers feel the same. One mother posted on Twitter saying she’s more worried about her son being hit by a bike than a car.

“They’re coming out of the sidewalk, they’re coming the wrong way on the street, I mean, you got to really look, swirl around,” Riservato said.

While there’s no data specific to delivery workers, electric bikes and traditional bikes have been involved in a combined 12 pedestrian deaths since 2008.

In the same period, motor vehicles were involved in 1,950 pedestrian deaths.

Los Deliveristas Unidos, a group representing delivery workers, says cyclists get paid $2 per delivery, meaning, not including tips, they have to make five trips in order to guarantee making $10.

“And on top of it, companies pay them more if they go faster, if they deliver faster,” said Hildalyn Colon, with Los Deliveristas Unidos.

Colon says while those incentives are there, the infrastructure is not.

“Unfortunately, if there’s not a bike lane, the sidewalk becomes the option,” said Colon.

The situation, she says, has proven deadly for delivery workers, too.

“How many times have I gone to the scene with a worker passed away and you see a bag of food there?” Colon said.

The answer: 14 delivery workers killed by cars in 2021 alone.

Colon says a big reason why is because, on all sides, the rules are not clear.

“Some of the ticketing that we have seen is not even standardized,” Colon said. “It’s based on the assumption or interpretation of the officer they encounter.

So what is the rule?

The Department of Transportation, which regulates sidewalks, says cyclists older than 13 are barred from riding on sidewalks in the city.

“We are always working to make our streets safe and accessible to all — and that includes collaborating with the NYPD and labor groups representing these workers to properly educate them on safety and enforce the rules on the road," the DOT said in a statement.

The DOT can’t issue tickets. Enforcement of the sidewalks is up to police.

The NYPD said, “We are aware that some cyclists do not follow the rules and we are taking countermeasures to address the issue. These measures include working closely with the Department of Transportation to educate delivery cyclist organizations on safety measures which include following applicable traffic rules. Patrol precincts are also conducting outreach and education to businesses where these cyclists are employed. When violations are observed, equitable enforcement is conducted to correct the actions of the cyclists and to protect our pedestrians.”

Riservato says, “I’ve never seen — in all the times I’m out, and I’m out every day — that anybody gets stopped or gets talked to or ticketed or anything.”

He said he wants a clear answer and a clear solution.

“I just hope that the authorities start enforcing some laws,” Riservato said. “Bikes shouldn’t be on the sidewalks, period.

The next phase of that legislation takes effect April 22, which will allow delivery workers to decide how far they are willing to travel to deliveries.

Los Deliveristas Unidos has also proposed to the city to create parking structures for bikes, which they say would help de-clutter the sidewalks.