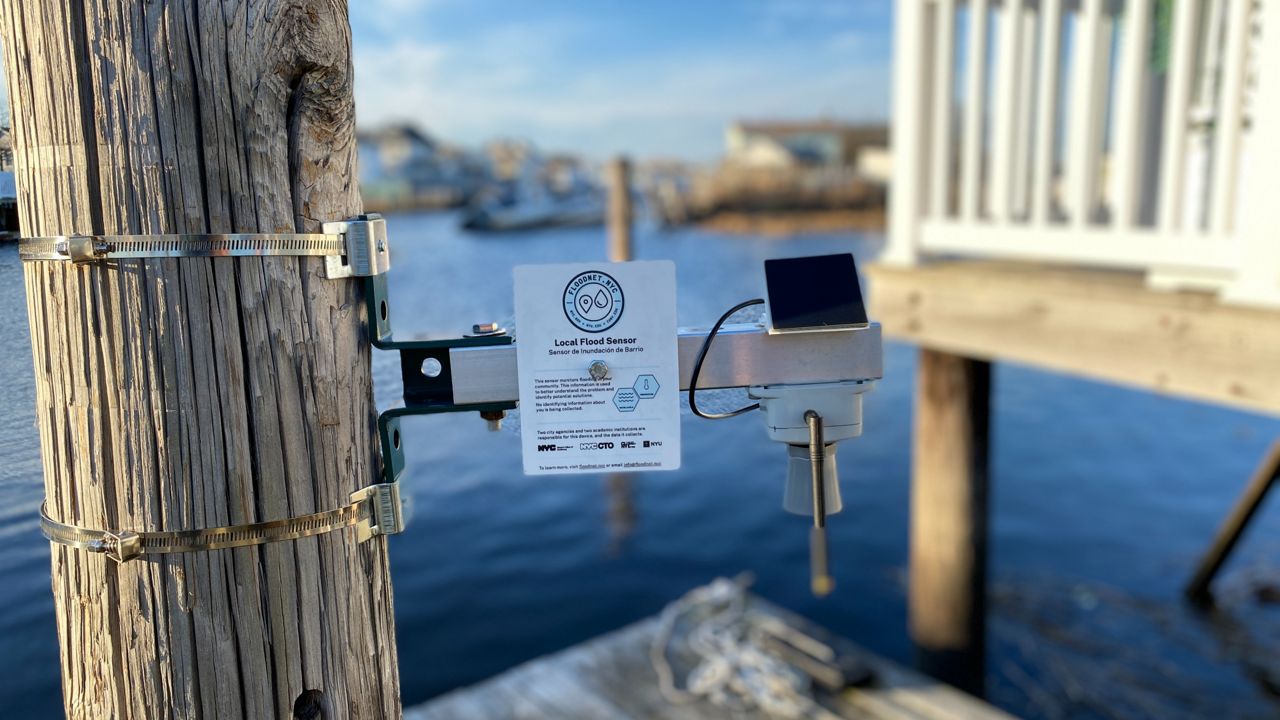 The flood sensors, which cost under $200 to make, will provide real-time information on local flooding in 50 neighborhoods around the city. (NY1/Ari Ephraim Feldman)

On a crisp, cloudless day earlier this year Ricardo Toledo-Crow went for a stroll in Van Cortlandt Park in the Bronx looking for one of the city’s newly discovered weak points: where water goes and stays during a torrential downpour.

He had just come from a nearby park that overlooks the Major Deegan Expressway, which during Hurricane Ida was flooded to the point of briefly becoming a canal. Yet even here, in typically spongy Van Cortlandt, an overpass by the lake had also been left with a lingering pool of water.

Toledo-Crow, a research associate professor at the City University of New York’s Graduate Center, hopped back into his rented pickup truck, the bed filled with tools, and drove to Mosholu Parkway, by the 4 train overpass. The storm had left the intersection almost impassable, according to Alicia Grullón, a borough resident and environmental activist who joined Toledo-Crow for the tour in February.

The only sign of the flooding now was the telltale lean of a traffic sign, pitched askew because of the perpetual muddiness of the grass where it was stationed.

All three places, Toledo-Crow determined, would make the cut for FloodNet, a network of flood sensors that will provide, for the first time, real-time data on where the water runs and stays.

Over the next five years, the city, relying on a team of academics from CUNY and New York University, plans to install 500 sensors in places across the city that see routine flooding. So far, they’ve put up 28, mostly in clusters in the south Bronx; Red Hook and Gowanus in Brooklyn; southeast Queens; and in Harlem.

Significant coverage from sensors will allow the city to place accurate signage warning of flooding, as well as issue alerts that communities can actually use.

The project offers a glimpse at how complicated an endeavor it is for the city to even begin understanding its vulnerabilities to climate change. The scientists are relying as much on the city for funding and permission as on residents for their knowledge of neighborhood problem spots, where rising water can indicate wider flooding.

Then, location by location, they’ll install the sensors on signs, buildings and telephone poles, cataloging the city’s water problem.

“We have three major stakeholders: the city, the communities and the academics,” Toledo-Crow said, walking back to his truck. “At the end of the day, everybody gets affected.” 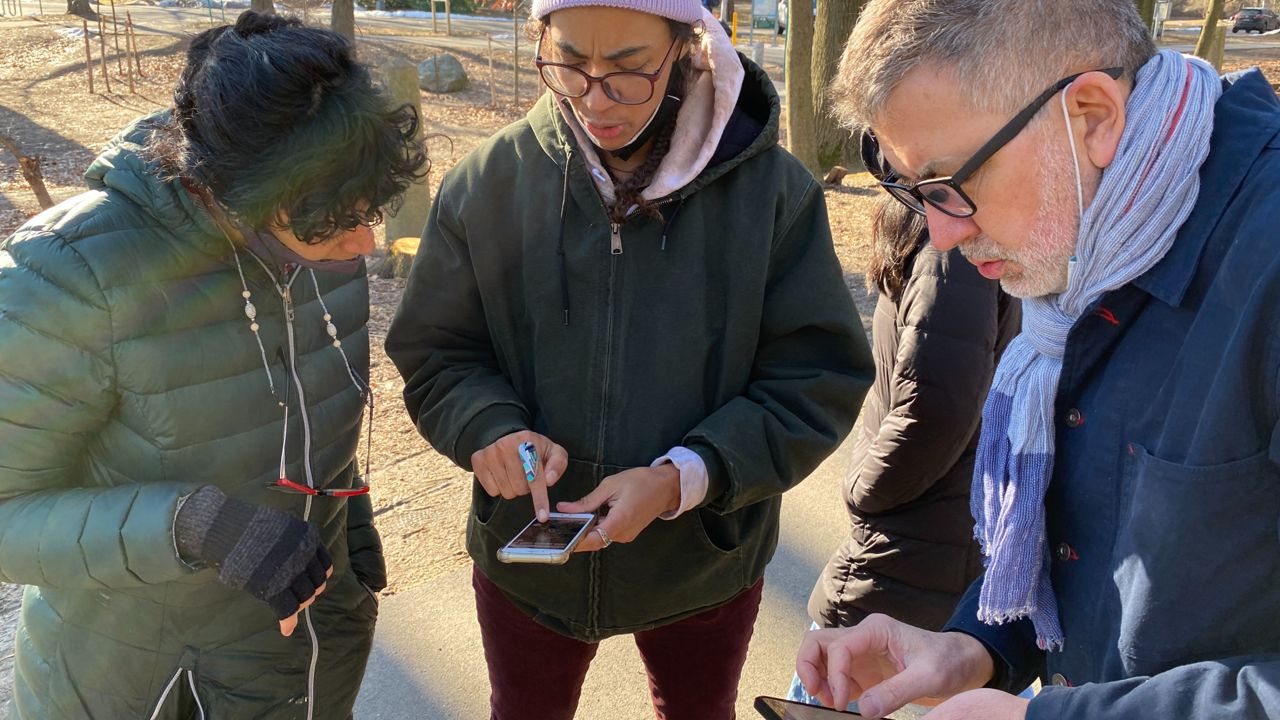 Ricardo Toledo-Crow, right, and Alicia Grullón, left, discuss locations to scout flood sensors with Kendra Krueger, a researcher and educator at CUNY who is working on curricula around the flood sensors. (NY1/Ari Ephraim Feldman)

‘This is pretty unique’

There are some places in New York City where it always floods, and everyone knows it — think southeast Queens, in neighborhoods built without storm sewers. There are other places that become infamous on social media when they flood, such as the Major Deegan or Manhattan subway stations.

Yet for the most part the city does not know where the water goes, and that is becoming a significant problem. Climate change is causing more “cloudburst” rain events, when areas as small as a section of a borough see an entire storm’s worth of rain in a short period of time, totally overwhelming the city’s sewer pipes. During Ida, Central Park recorded more than three inches of rain in one hour.

The costs of intense rain have become brutally clear since the storm: 13 people died in New York City from Ida’s flooding, and the damage cost the city transit system alone at least $75 million.

The 311 helpline collects instances of flooding complaints, but the geographic tags for the complaints are approximations, and data is not readily available to city agencies in real time.

“The 311 call line is important, but it's sporadic,” said Carrie Grassi, the deputy director for planning at Mayor's Office of Climate and Environmental Justice, which is leading the FloodNet project. “You get complaints or calls from folks about flooding on their streets, but it requires somebody to have the effort to pick up their phone.”

Grassi’s office brought together two teams of researchers that stood on either side of the issue. At NYU, Andrea Silverman had set out to research contaminants in flood waters, but realized there was no good data on where it flooded. At CUNY, researchers with the university’s Science and Resilience Institute at Jamaica Bay were working with residents of Hamilton Beach, which abuts the bay, to photograph instances of local flooding.

The city asked them: Could the teams use one community’s flood monitoring to create a needed research dataset, and a tool for emergency management in the city?

Cobbling together grants and money from their research budgets, the academics prototyped sensors and installed them in Gowanus and Hamilton Beach. Slowly, the money began to run out.

“The plan was still up in the air,” Silverman said.

Then Ida hit. As former Mayor Bill de Blasio’s office prepared a report on emergency preparedness, the mayor’s climate office proposed expanding the sensor network to 50 neighborhoods across the city over five years, and investing $6 million in the effort.

For Grassi, it represented something new in city government: A permanent, continuous data collection operation that would address the needs of multiple city agencies. Existing sensors around the city that collect information on temperature, air quality and noise typically only operate seasonally, or in small pilot areas.

“For this kind of intensive, from-the-ground-up data collection effort, I feel like this is pretty unique,” Grassi said. “Having this prospect of reliable, citywide data is really exciting to a lot of people.” 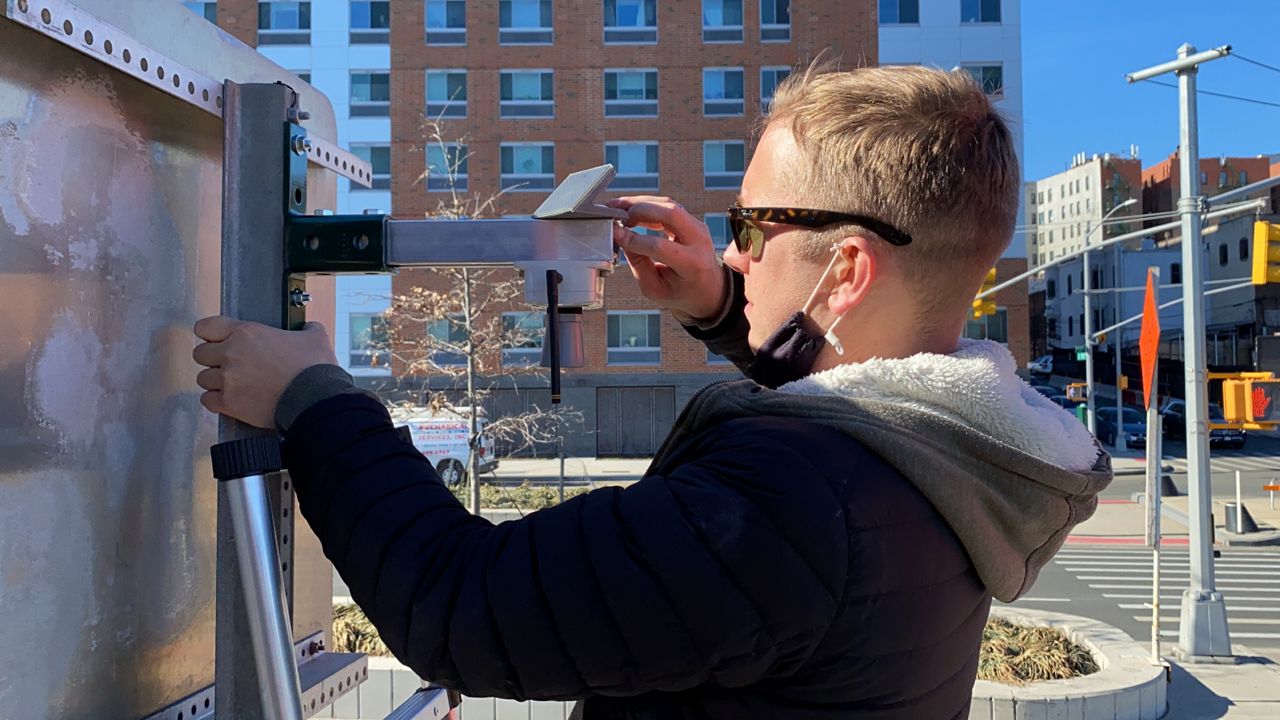 Charlie Mydlarz, a researcher with NYU, installed a flood sensor on a traffic sign on Sheridan Boulevard, near the Bronx River in the Crotona Park section of the borough. (NY1/Ari Ephraim Feldman)

A few hours after Ricardo-Crow scouted Mosholu Parkway, Charlie Mydlarz set a ladder by a traffic sign on busy Sheridan Boulevard, along the Bronx River, and climbed up. In his hand was a FloodNet flood sensor, which resembled a DIY version of a Mars rover’s camera arm.

Mydlarz, a research assistant professor at NYU’s Tandon school, had scouted the area based on reports from residents and the city’s stormwater maps, which indicated a high likelihood of flooding at the bottom of the hill at 173rd Street.

He had just come from the roof of the nearby Bronx River Alliance headquarters, where he and Praneeth Challagonda, one of FloodNet’s engineers at NYU, had installed a “gateway,” a server that would collect data from nearby flood sensors and beam it to the cloud.

The sensor, Mydlarz explained, was a basic but effective piece of hardware: A lens pointed toward the ground sends out an ultrasonic beam every minute; it then measures the milliseconds it takes for the beam to return to the sensor, and calculates the distance to the ground — or to a growing pool of water.

“If there’s a flood, they're gonna pick up the depth of the flood, every minute, send it to this gateway, and it comes back to us, back to our servers,” Mydlarz said. “We plot the data, we alert any relevant city agencies to any flooding events, and we hopefully help out in these situations when the city floods.”

A small solar panel mounted above the sensor keeps the power on, allowing the sensor to send data back year-round, without maintenance.

After about 40 minutes of setup and installation, Mydlarz asked Challagonda to hand him a level. The ladder was pushing against the sign, he realized, throwing off the measurement slightly.

“It’s slightly too far that way, so when I get off it's gonna level out,” he said. “Oh, this is gorgeous.”

As he stepped off the ladder, Challagonda opened the app the researchers use to monitor the data. The sensor, pinging off the rooftop gateway, was sending back measurements.

Already, the sensors installed in Gowanus have shown how “hyperlocal” flooding is, Silverman says. Curves showing water height picked up by the sensors during Hurricane Henri last August show some intersections experiencing two peaks of flooding, while others have a quick rise followed by a quick drainage.

That kind of data will generate alerts, Grassi said, “That aren’t like, ‘southern Brooklyn is at risk of flooding,’ but to be able to pinpoint certain neighborhoods.”

The sensors will also show the city where there are bottlenecks in the sewer system that need expanding, and where to install green infrastructure, such as rain gardens — and then measure whether it’s working.

One such example is a planned sensor installation at the South Jamaica Houses, a NYCHA development in southeast Queens. The city is planning to sink the basketball courts there several feet into the ground, turning them into a catchment area for excess rain; sensor measurements taken up until that construction is complete, as well as after, will show how effective that kind of intervention is.

“We have a lot of flood models, what we might anticipate flooding to be, that are based on historic events,” Grassi said. “But now we have the ability to validate those models, so it makes some of the planning a little more refined.”

The limiting factor, the researchers say, is the time it takes to scout locations and install the sensors. They have carte blanche from the city to put sensors on most street signs, but finding rooftops with a power source for the gateways is tricky, and some ideal locations need city agency approval.

In April, the FloodNet team plans to launch the beta version of an app that will show the real-time sensor measurements. Grassi said the city has committed to keeping the data from the sensors publicly available in perpetuity — something Silverman said the research team conveyed was a “core value” of the project for them.

After the next planned deployment, around the South Jamaica Houses, Mydlarz says the team will continue going through a list of communities that have requested sensors, including parts of Queens where Ida took lives and damaged hundreds of homes.

For Roger Gendron, the president of the New Hamilton Beach Civic Association, having early access to the sensor data from the pilot program has been invaluable. For years, he has run a Facebook page just for residents’ pictures of local flooding in the Queens community.

Now, he said, he can check an early version of the FloodNet app and send alerts before anyone has even noticed a growing pool of water in the road.

“I can pull it out on my phone and check it right now,” Gendron said, standing outside the Hamilton Beach Motor Boat Club, in the evening hours after the Bronx sensor deployment.

Gendron said he had recently visited a house where a mother and son drowned during Hurricane Ida. Maybe during the next storm, he said, this data could prevent such a tragedy.

“If this was a way to alert them sooner — not when the water’s at three feet in front of the house, but when it’s at six inches, who knows, could those lives have been saved?” 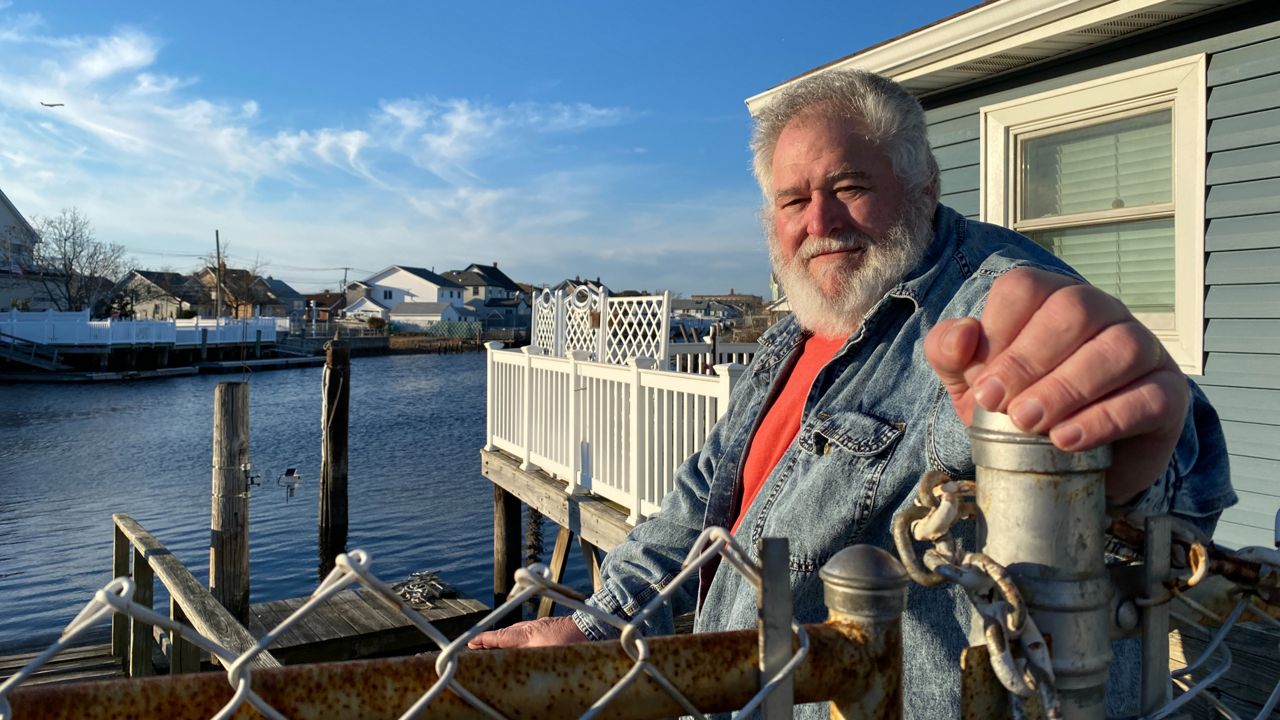 Roger Gendron stands in Hamilton Beach in front of one of the neighborhood's two flood sensors. (NY1/Ari Ephraim Feldman)