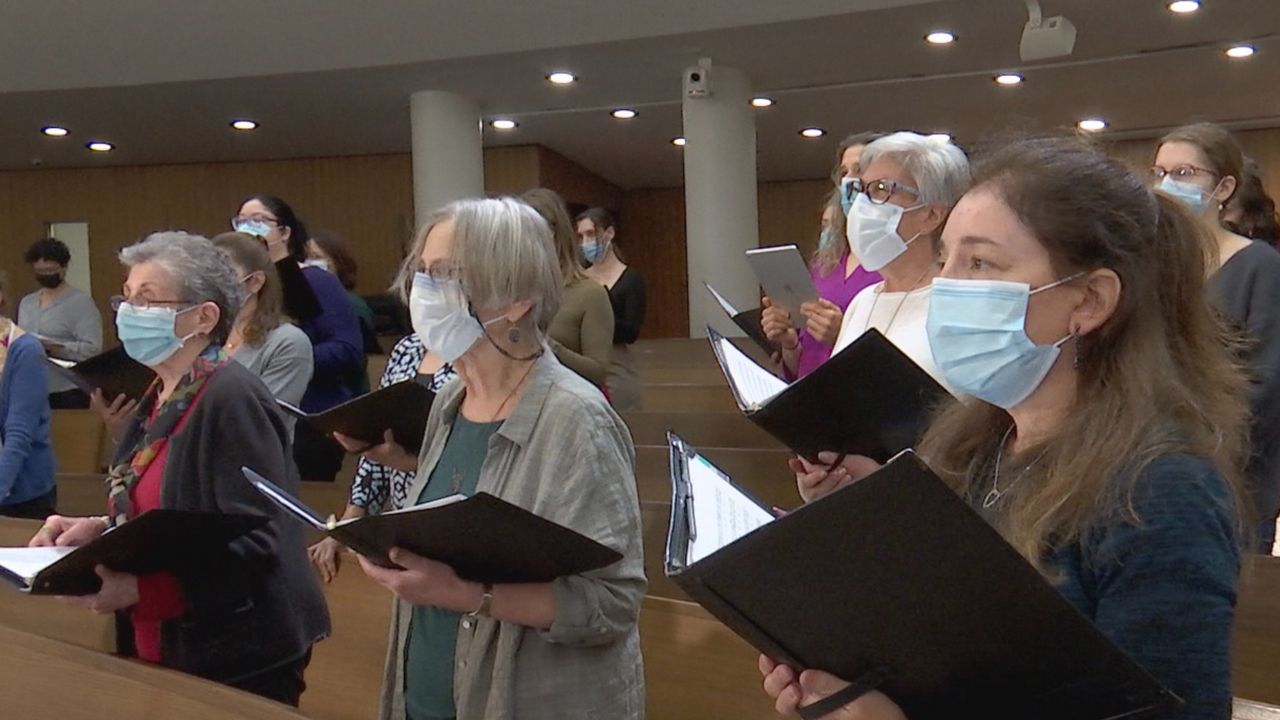 The NY Choral Society is preparing for a heartfelt tribute to essential workers. For some in the chorus, it's a time to reflect on the devastation and the joy they find in the music. (Spectrum News NY1/Stephanie Simon)

New York Choral Society to salute frontline workers, which includes some of their own

The New York Choral Society rehearsed for an upcoming concert saluting frontline workers of the pandemic, which includes some of their own, like chorus member and hospital nurse Alaina Smalley.

“I am honored to be able to pay tribute to my fellow nurses and other frontline workers who have made it through some tough times here in New York,” said Smalley, a Northwell Health nurse.

Music director David Hayes leads the group of performers who volunteer their time. He said it was the music selection, including “Healing Heart” and “Amazing Grace,” that inspired the chorus to honor essential workers.

“Initially, it was as I say, kind of like this big musical hug for our audiences and everything. And then we realized that the the themes and the music began touching on on the experience of having been through the 24 months so far of the pandemic. But also understanding that one of the ways we all got through that was through the extraordinary efforts of first responders,” said Hayes.

Dr. Juliann Paolicchi, a nationally recognized pediatric epilepsy expert at Northwell Health, worked in the ICU through the pandemic. She has no doubt the concert, Love in Action, to be performed on April 2 at the NY Society for Ethical Culture, will be emotional.

”This is no mascara music and I hope David will understand that some of us who sing from both parts of ourselves, both the music, as well as our spirituality, will likely be streaming tears and it will be a no mascara concert,” said Paolicchi.

“This experience was like something we had never experienced. We'd seen it in movies, we'd seen it in film clips, but it was a war. We were at war with the virus,” added Paolicchi.

Smalley hopes to not cry.

“I'm ready to stop shedding my tears and, you know, start smiling again and sharing this beautiful music,” said Smalley.

The upcoming concert is special for so many reasons, including that it will be the chorus’ first time performing live on stage in front of an audience in more than two years.

“We missed them as much as I hope they missed us and being able to share this beautiful music will truly, I think, be a healing moment for the choir, for the audience and for New York,” Smalley said.