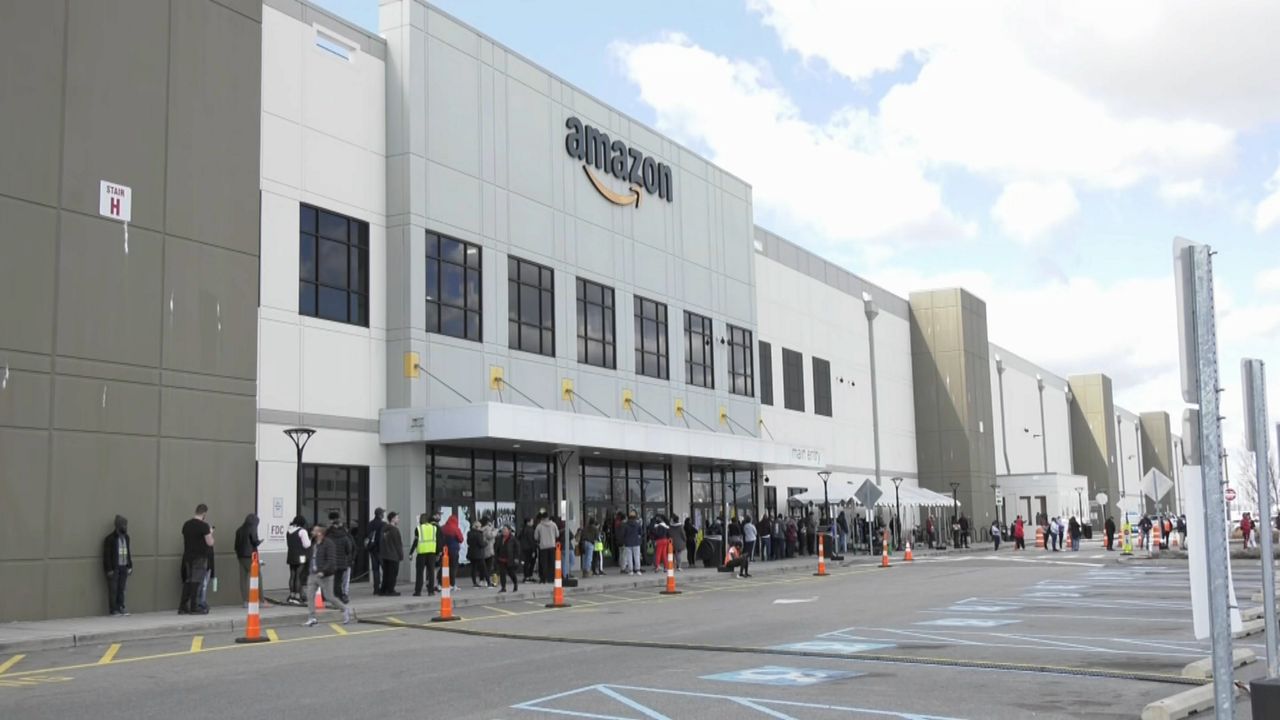 Thousands of Amazon workers on Staten Island will decide whether or not to unionize in a vote that kicked off on Friday.

Workers started voting in a tent outside of one Amazon warehouse, known as JFK8, at 8 a.m. They will decide whether thousands of workers at this warehouse should be represented by the Amazon Labor Union.

That union is made up of current and former employees-- not affiliated with any of the established labor organizations here in the five boroughs.

That was a deciding factor for Patrick Delancey, who voted no.

"I'd rather a real union come in. 1199. Teamsters. Local 79. Someone that's been around,” he told us. Delancey unloads trucks at the warehouse.

He said it’s a good place to work.

"If you weigh your pros and cons, Amazon got a lot of pros going with them and a little bit of negative,” he said. “Yeah, we work 10-12 hours, but the benefit is they don't let us go past a certain amount of hours."

On Friday morning, the line of workers queuing up to vote quickly grew, snaking around the parking lot. Some waited about an hour to cast ballots.

Workers will be able to cast ballots on Saturday, Monday, Tuesday and Wednesday. Voting will occur in two shifts – one in the morning and one at night.

This is the second warehouse-wide union election for Amazon in the country. An Amazon warehouse in Bessemer, Alabama is currently in the process of conducting its own election, with votes set to be counted starting March 28.

The National Labor Relations Board will begin counting ballots on Thursday. JFK8’s Amazon Labor Union will need a simple majority of votes to win.

For months, workers have been organizing here, led by a former employee, Chris Smalls. Smalls says he was terminated by the company in 2020 for leading a protest. Amazon says he violated its social distancing and COVID-19 quarantine rules.

On Friday, Smalls said this campaign was resonating with workers.

"The number one thing is taking care of ourselves, health over wealth, working conditions, jobs security, higher wages, better quality of life, all of these things that a union can provide," Smalls said.

Part of their promise is possibly a higher wage -- something that led some employees to vote yes.

"I voted for the union,” said Kevin Michelus.

So far, there has not been much political support from local leaders for this group -- just a rally on Sunday where the public advocate and city comptroller were in attendance.

On Friday, we asked the mayor whether he supported the workers efforts.

"I am a union member,” Mayor Adams said at an unrelated event in Brooklyn. “I believe in unions. I'm hoping that all the workers do a real analysis of having a union. I believe in it. And I am hoping we can start the process of unionizing all of these shops. I think unions should be in every occupation."

Amazon has been attempting to persuade workers to vote no.

The start of the JFK8’s election comes a week after the National Labor Relations Board confirmed that a second Amazon warehouse on Staten Island — a facility known as LDJ5 — will hold its own union election the week of April 25.

In a statement released after that election was announced, Amazon spokesperson Kelly Nantel said: “We look forward to having our employees’ voices heard in this election, and our focus remains on working directly with our team to continue making Amazon a great place to work.”