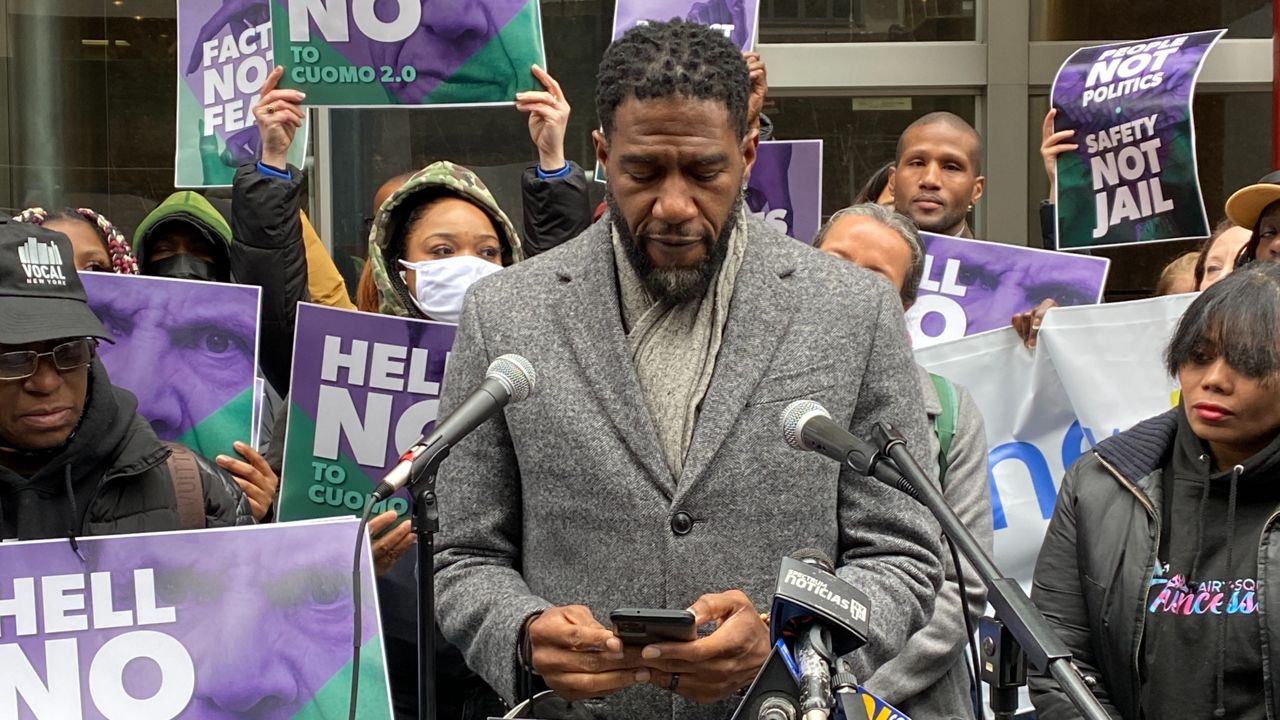 Public Advocate Jumaane Williams reads a portion of an op-ed written by Gov. Kathy Hochul and Lt. Gov. Brian Benjamin at a rally in Manhattan on Thursday. (NY1/Philip O'driscoll)

In a Daily News op-ed published Wednesday, Hochul and Lt. Gov. Brian Benjamin touted a package of criminal justice reforms they hope state lawmakers will enact as part of the budget, including a “dangerousness standard” that would allow judges to determine who should be released before trial.

But the legislature feels very strongly about protecting those criminal justice laws, and it remains to be seen whether Hochul will get her way as part of the state budget due next week. In the meantime, she is enduring an onslaught of criticism from her political opponents on both sides of the aisle.

Hochul is facing election as governor for the first time this year, and she will be on the ballot in June for the Democratic primary.

Public Advocate Jumaane Williams, who is challenging her in that primary from the left, led a rally outside her Manhattan office on Thursday. Williams maintained the governor is caving to political pressure by asking for bail changes.

“Right now, she believes it is beneficial to feed the fearmongering,” he said. “To join the Republican lines because there is an election to be won.”

Making matters more politically difficult for the governor to navigate, Hochul has refused to answer any questions about her position on bail.

Hochul avoided reporters’ questions about the issue on Wednesday. Benjamin, meanwhile, ran away from reporters on Tuesday. He later apologized and took some questions.

Rep. Tom Suozzi, who is running to Hochul’s right in the Democratic primary, said on Thursday that the state has “a crime crisis.”

“It’s a very real problem. The governor has treated it as an afterthought,” he said. “She says, ‘I’m going to deal with it after the budget. I need more data.’ And then we all know, I think it was last week, she leaked her crime proposal, or she says it wasn’t her, to the Post, and then to some other papers. And she won’t talk about it.”

Suozzi’s attacks are similar to those being made by Rep. Lee Zeldin, the Republican party’s designee for governor. He said Hochul is avoiding the issue.

Hochul has said repeatedly that she will not negotiate bail or other budgetary issues through the press.

And while the governor and Benjamin are pushing for their proposed bail reform changes to be included in the state’s upcoming budget, Senate Majority Leader Andrea Stewart-Cousins on Wednesday indicated that lawmakers were not inclined to do so.

The legislature signed off on the bail reform law back in 2019.

“I think the general sense is that nobody in our conference is wanting to go backwards, absolutely not,” Stewart-Cousins told reporters. “But I’ve always said about the conference, and it’s true, that we’re always trying to make sure that what we do hits the mark.”