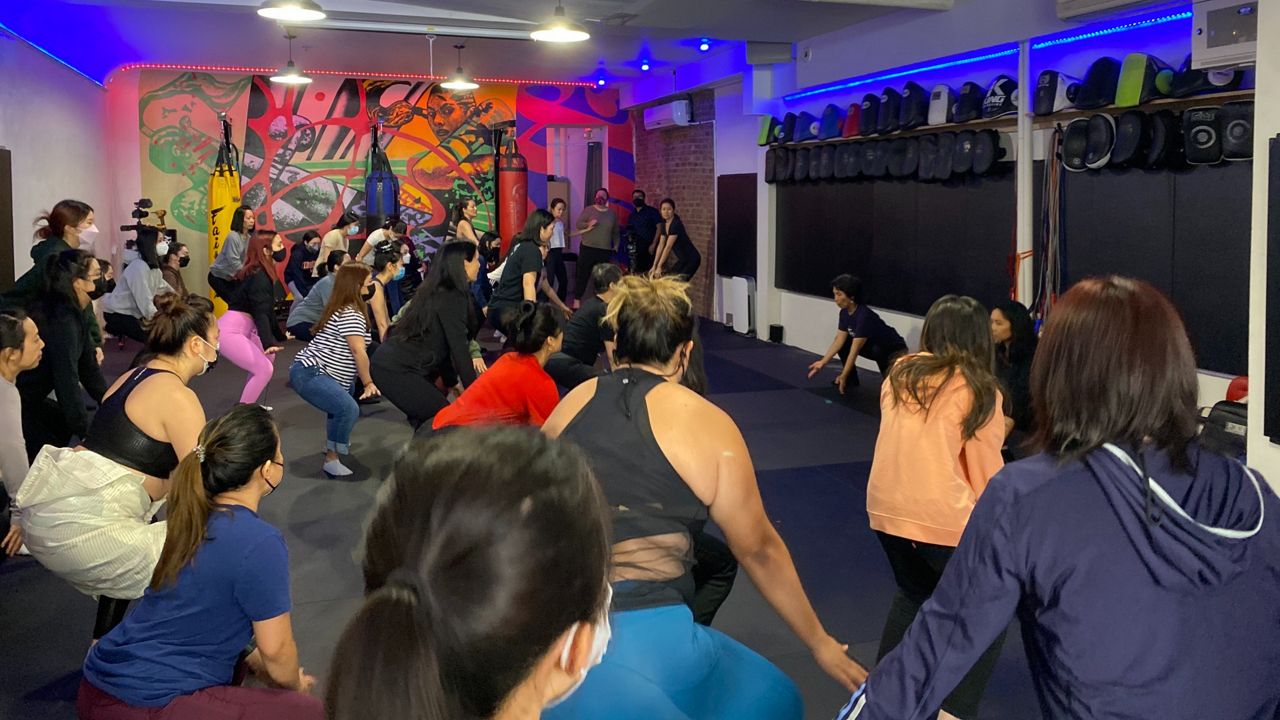 Sisters Elizabeth and Alberta Yan spent their Saturday afternoon punching, kicking and blocking. It was all part of a self-defense class for women in the Asian American Pacific Islander (AAPI) community.

“When I walk down the street I no longer feel safe," said Alberta Yan. "This is no longer my home. I can’t step outside without the fear of being attacked whether verbally or physically."

AAPI activists groups OCA-NY and Soar Over Hate organized the event at Two Bridges Muay Thai in Chinatown. They said the rise in anti-Asian hate crimes has prompted a need for these classes.

According to the NYPD, at this time last year, the city saw 52 hate crimes. But as of last weekend, that number increased to 153.

“The reality is racism has gone on even before our generation," said Elizabeth Yan. "It’s just been more heightened now because I think more people are actually paying attention."

“The truth is taking these amount of classes, having pepper spray with you isn’t going to be any safer," said Elizabeth Yan. "The truth is these attacks, they’re because you're blindsided, they come out of nowhere, they’re unprovoked. I'd like to think that this is going to be preventative but the truth is it’s just a feeling of prevention and it's not going to stop what is happening."

“It’s unfortunate that it’s in high demand. I have recently been asked to facilitate these seminars probably every weekend,” said Ng.

Many who took the class said they wanted to learn these safety skills to have more confidence in their ability to fight back if a violent situation were to happen.

“I think in general women should be able to protect themselves," said student Tammy Wang. "I think they are a lot of issues in general, of safety. I've traveled all over the world and just understand what you can do to defend yourself. As a woman, you're already vulnerable in some capacity, so just finding those opportunities of not harming someone else but finding a way to protect yourself from some kind of harm."

Ng says although these safety skills are powerful. She believes change and community go hand in hand.

“Learn to make friends and create relationships with your neighbors and people around you in the community," said Ng. "We are so blessed to be living in NYC in one of the most diverse cities in the country and unless we build relationships and understand and learn from each other, our diversity is essential to humanity."

Organizers said they plan to hold a class monthly, not only to teach self-defense, but to teach these skills using an artform of the AAPI community.