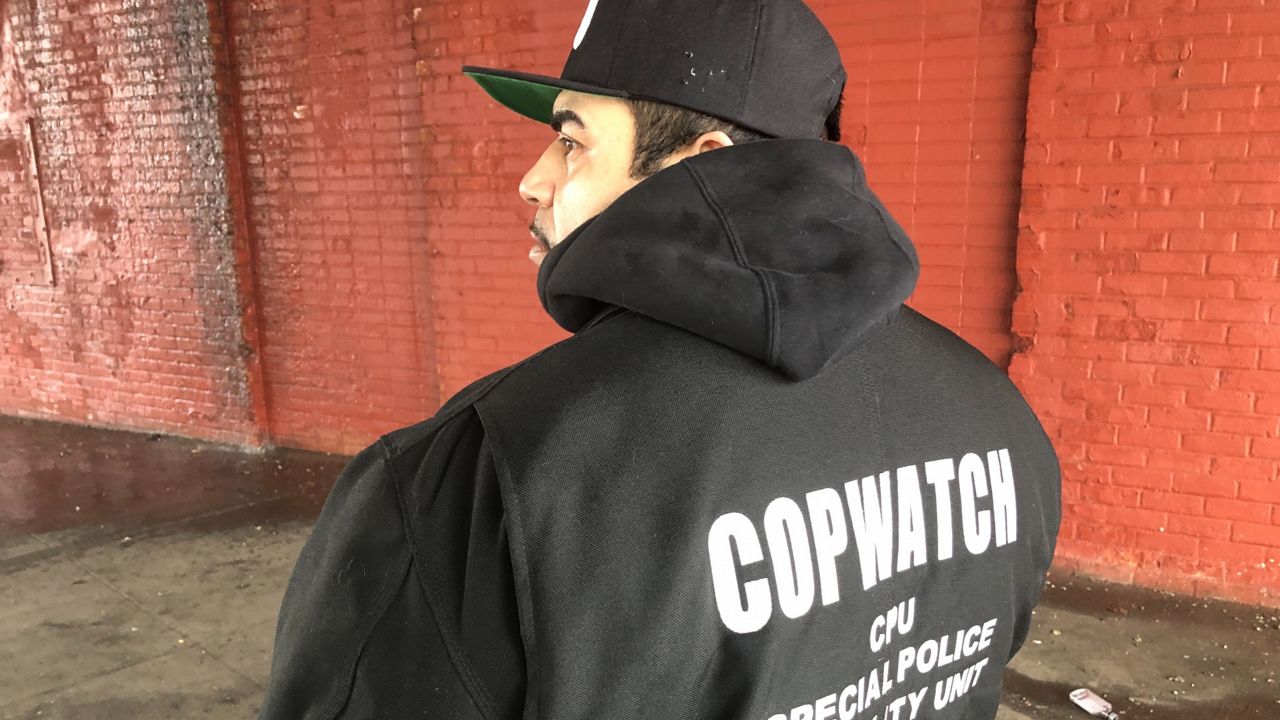 Mayor Eric Adams caused a mini-fire storm with comments about people videotaping cops as they make arrests on the street. Jose LaSalle, pictured above, leads a Copwatch Patrol Unit in the Bronx. (Spectrum News NY1/Dean Meminger)

Without the cellphone video of Eric Garner being placed in a deadly choke hold by an NYPD officer, the world might not have known what really happened.

Jose LaSalle, the head of the Copwatch Patrol Unit in the Bronx, says he's outraged Mayor Eric Adams is now telling people to backup when recording video of police.

"We have thousands and thousands of videos posted up to show that the NYPD are very aggressive to people of color and they don't follow the proper procedures and protocols," said LaSalle.

He has been recording cops for more than a decade.

He thinks the mayor is trying prevent people from getting good video of bad police actions.

As the mayor rolled out the new NYPD neighborhood safety teams to get illegal guns off the street, Adams proclaimed too many people are getting too close to cops as they make arrests.

"I'm not going to put these men and women on the frontline and have someone put a phone in their face while they are taking action and try to critique their ability to do their job," said Adams.

The mayor, who is a retired NYPD captain, says cops have his support.

But civil rights groups say the mayor needs to stop talking like a cop.

"When the mayor tells New Yorkers to back off he is sending a message to us that we don't have the right to videotape and we better not," said Donna Lieberman, executive director of the New York Civil Liberties Union.

"And he is sending a message to police officers that they have free rein to intimidate us from taking videos of them doing their jobs."

The mayor admits cellphone videos can help with investigations. However, he still insists yelling and screaming at officers while recording makes an already dangerous situation worse.

"If you iPhone can't catch that picture with you being at a safe distance, then you need to upgrade your iPhone," he said.  "Stop being on top of my police officers while they are carrying out their jobs. That is not acceptable and it won't be tolerated."

The NYCLU says the constitution and city and state laws give people the right to record in public.

"He chills first amendment rights and he undermines something that is important to all New Yorkers, which is police accountability," said Lieberman.

Despite being a high profile civil rights leader, Lieberman said she's been threatened twice with arrest for recording cops.

Jose Lasalle has been arrested and successfully sued the city for nearly $900,000. His recordings show cops falsely arrested him and joked that they should hit him with a gun charge.

Lasalle gives this advice to anyone recording cops: stay safe, but keep recording.

"At least 10 feet away, where an officer cannot slap cameras out of our hands,” he said.

There's no official rule on how far a person needs to stand back when recording.