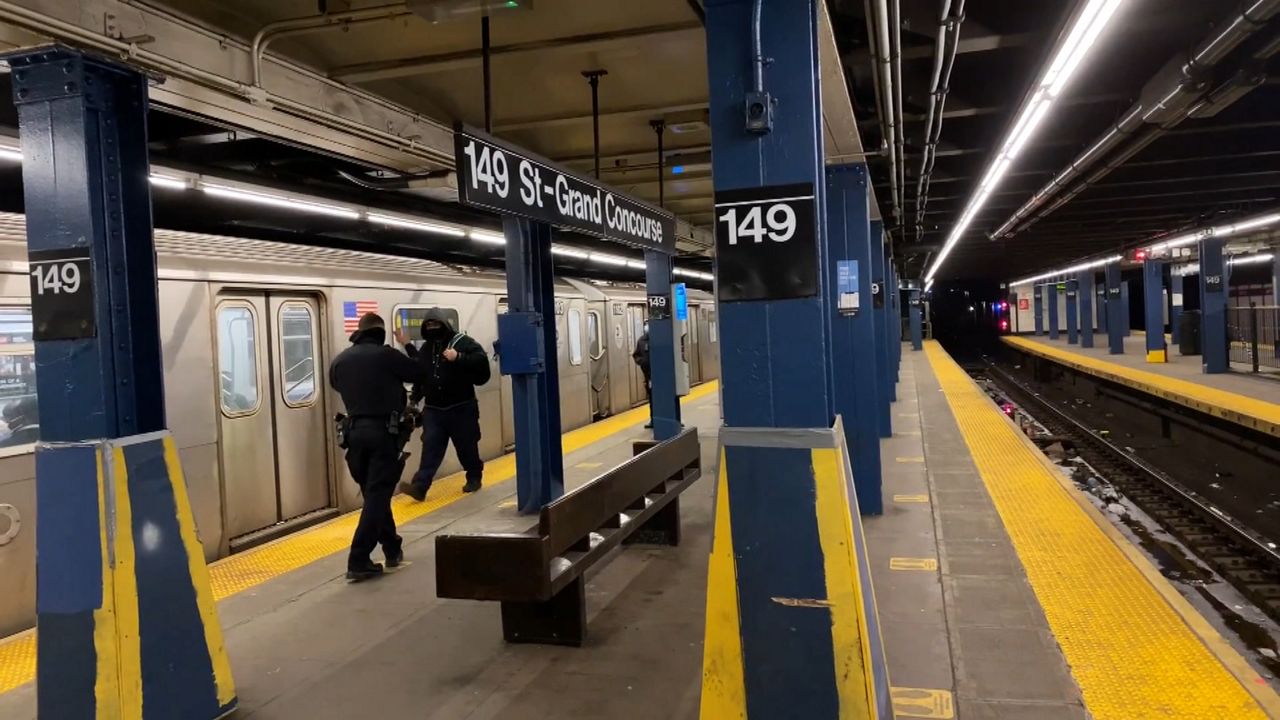 Police investigate a dispute that led to a stabbing Saturday afternoon at the 149th Street and Grand Concourse Station in the Bronx. (NY1 photo)

NEW YORK — A joint plan between Mayor Eric Adams and Gov. Kathy Hochul to try and reduce the number of homeless people in the subway system is being put into action Monday.

The "Subway Safety Plan" will deploy NYPD officers, clinicians, and community-based providers to canvas the subways, focusing on high-need locations, including the A, E, 1, 2, N and R lines

The plan, the mayor and governor said Friday, is aimed at helping homeless New Yorkers and those suffering from mental illness.

In addition to increased police presence, the mayor said the MTA's code of conduct will be enforced, which prohibits lying down on seats, spitting, littering and aggressive behavior. Those experiencing homelessness will also need to get off the train at the end of the line.

The implementation of the plan comes after a violent weekend on the subway system.

There were six reported stabbings in the span of 48 hours.

The most recent happened on a southbound 6 train at the Canal Street station around 6 p.m. Sunday.

He was taken to the hospital and is expected to survive.

In the Bronx, two teenage girls were arrested Saturday after police say they attacked a 74-year-old man on a subway.

Police say the man got into a dispute with the girls who were smoking on a northbound 2 train at the 149th Street and Grand Concourse Station.

Police say one of the girls slashed the victim in the face while the other pushed him to the floor.

They also allegedly took his cellphone.

Both girls face several charges including robbery and assault.

One has been identified as 19-year-old Naila Williams.

As a minor, her name is not being released.

Following the string of subway stabbings, police arrested a man Monday morning who authorities say was wielding a hatchet at the Franklin Avenue Station in Brooklyn.

Transit police posted a picture of the weapon to Twitter, and say the incident took place around 12:30 a.m.

Dangerous instruments are prohibited in the subways- Here officers from Transit District 32 display a hatchet used in an attempted assault last night in Brooklyn. The suspect was arrested and is being charged with attempted assault, menacing, and criminal possession of a weapon. pic.twitter.com/wAdxvDhylB

Police say the hatchet-wielding suspect charged at another man standing on the platform.

Though the man was not hit, police say the suspect was also carrying a screwdriver and a punch dagger.

He now faces several charges, including attempted assault, menacing, and criminal possession of a weapon.

The mayor says he wants people to get back to using the subway system. But advocacy groups say the plan stigmatizes and criminalizes homeless people and those suffering from mental illness.