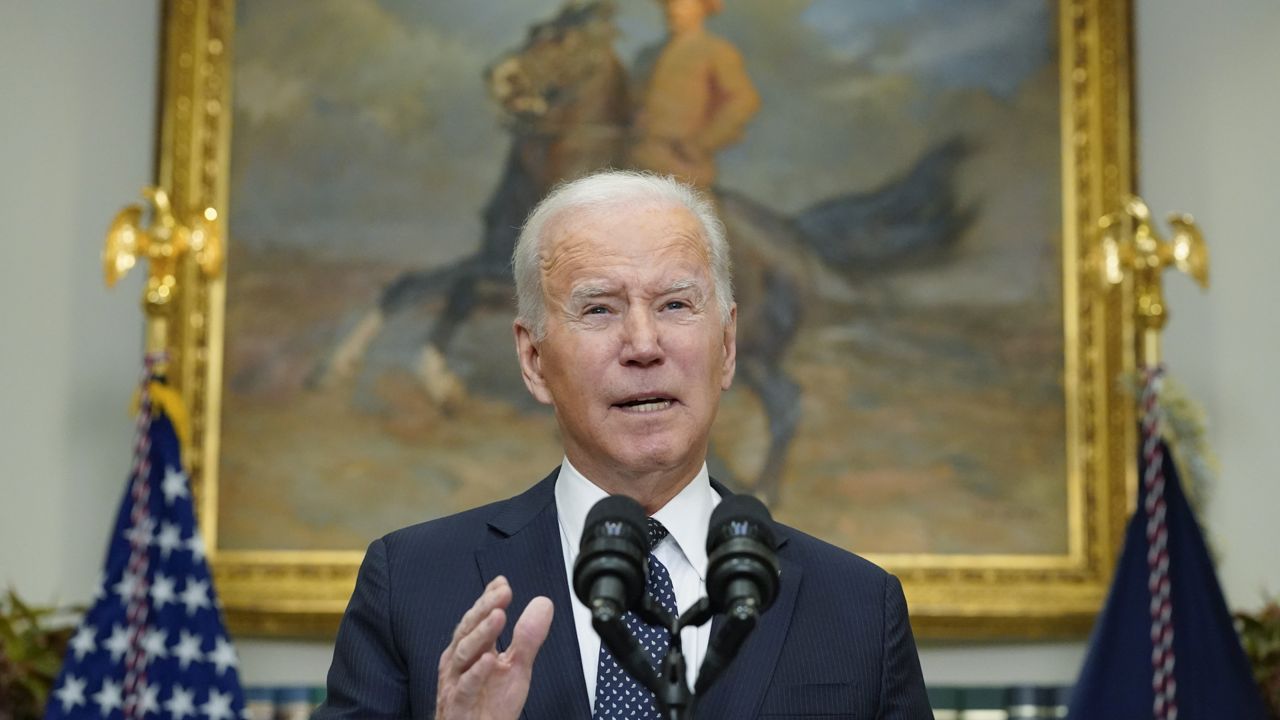 President Joe Biden on Friday gave his clearest attestation yet that Russia’s president Vladimir Putin was imminently prepared to invade Ukraine, saying he is “convinced [Putin has] made the decision” to invade and warning such an attack could occur in the coming days.

Biden attributed the new assessment to "significant intelligence capability" of the U.S. government.

The president called on Moscow to choose diplomacy as Russia continued to surge troops at Ukraine’s border, fueling fears of an imminent invasion that could threaten Europe’s post-Cold War security order.

“Russia has a choice: between war and all the suffering that will bring, or diplomacy that will make a future safer for everyone,” Biden said from the White House. “There are many issues that divide our nation and our world. But standing up to Russian aggression is not one of them.”

Biden had previously said an invasion was a “distinct possibility” but didn't say Putin had made a decision. Friday’s statements indicated the president believes an invasion was all but certain.

The United States on Friday upped its estimate of Russia’s troop strength for a possible Ukraine invasion to as many as 190,000, up from about 100,000 on Jan. 30, according to Michael Carpenter, the permanent U.S. representative to the Organization for Security and Cooperation in Europe.

The new estimate includes pro-Russian separatists inside Ukraine, the Russian National Guard and Russian troops in Crimea, which were not counted in previous assessments.

Biden, who on Friday spoke by phone with transatlantic leaders, said the “overwhelming message” from all U.S. allies was “one of unity, determination and resolve.”

The president also added U.S. secretary of state Antony Blinken is set to meet with Russia’s foreign minister Sergey Lavrov in Europe on Feb. 24, saying any invasion before that time would mean Russia had “slammed the door shut on diplomacy.”

“They will have chosen war and they will pay a steep price for doing so, not only from the sanctions that we and our allies will impose on Russia, but the moral outrage the rest of the world will visit upon them,” Biden said.

National security officials on Friday also spoke at the White House about how they were preparing the U.S. for a potential Russian invasion, both by shoring up cybersecurity and monitoring the economic impact of Western sanctions threatened on Russia.

Sanctions, said deputy National Security Advisor Daleep Singh, would pose an “immense” cost to Russia, “both to its economy and its strategic position in the world.”

“Our financial sanctions have been designed to impose overwhelming and immediate costs to the largest financial institutions and state owned enterprises in Russia,” he added. “Both financial sanctions and export controls deny something to Russia that it needs and can't get from anywhere other than the United States or our allies and partners.”

However, Singh said, they are not designed to target Russia’s ability to supply energy, which makes up a major portion of its economy but would also have a ripple effect on oil and gas prices throughout the world, including in the United States.

As far as cyber threats, top cybersecurity official Anne Neuberger on Friday said the Biden administration had been working with private companies to protect key infrastructure from potential Russian attacks, and she urged businesses to prepare their own defenses.

“We urge our private sector partners to exercise incident response plans and put in place the cybersecurity defenses like encryption and multifactor authentication that make cyber attacks harder for even sophisticated cyber actors,” Neuberger said.

She also directly blamed Russia for this week’s attacks on the websites of Ukrainian banks and defense agencies.

“The speed with which we made that attribution, as you note, is very unusual,” she said. “And we've done so because of a need to call out the behavior quickly.”

The Biden administration this week has been incredibly vocal about the high possibility of an attack in the next several days, laying out explicit Russian tactics and the possibility it could fake a provocation from Ukraine to give an excuse for an attack.