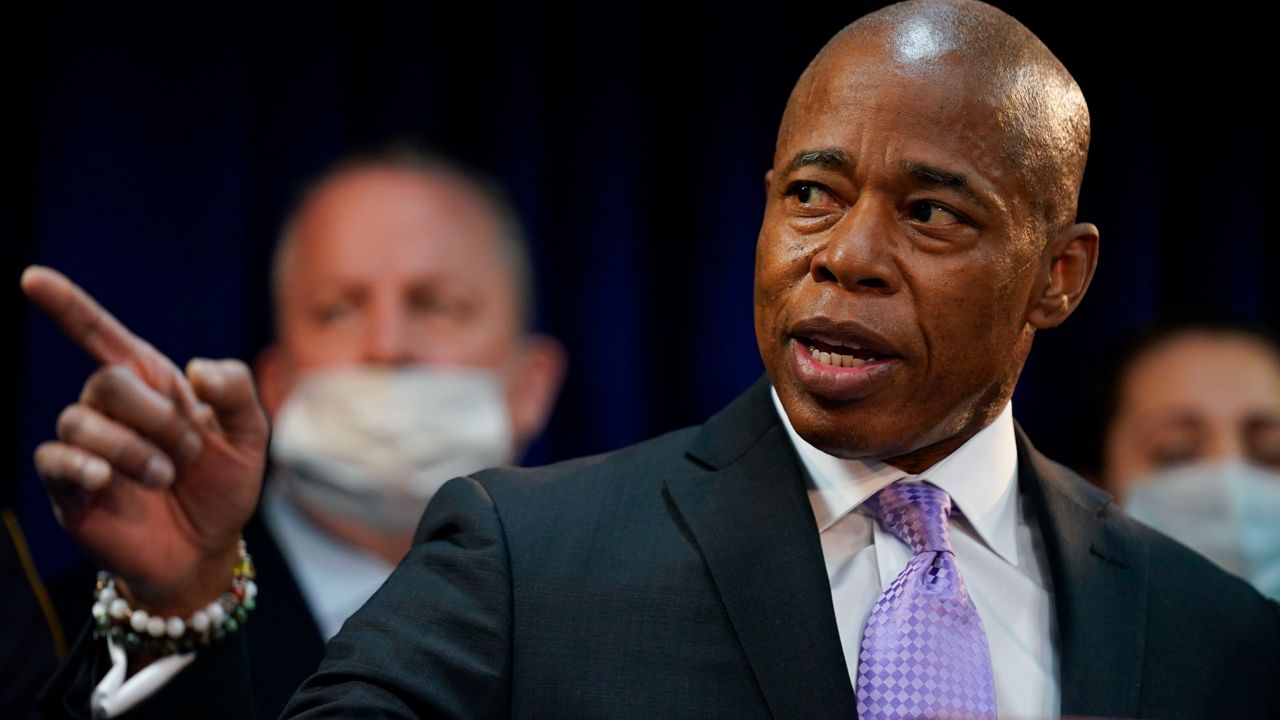 Some teachers, NYPD officers and other city employees who were suspended for refusing the shot could be terminated under the de Blasio-era mandate if they do not get vaccinated by Feb. 11.

In an interview with NY1’s Pat Kiernan on “Mornings On 1” Friday morning, Adams said he supported the directive.

“Well, the rule was in place during the previous administration, and we have to be clear when there’s a rule in place, because it sends the wrong message, that, if we do not have the continuation of how to keep our city safe,” he said. “Everyone was receiving the same level of warning that they were supposed to receive.”

“It has been extended, waivers were put in place, everything was put in place to make the right decision,” he added. “And we’re asking all New Yorkers who are here. Vaccines and boosters. This is our most formidable weapon against a formidable opponent called COVID, and so we need people to be vaccinated.”

Pressed to say whether employees who continued to refuse the shot would be let go, Adams said it was “up to them to make a decision.”

“They’re quitting. I’m not terminating, they’re quitting,” he said. “We don’t want to terminate anyone — we want people to be vaccinated and employed so that our economy can continue to open — and the fastest way to get that open is for us to have a safe environment.”

Adams’ remarks came a day after he met with President Joe Biden, Gov. Kathy Hochul and a bevy of other elected officials and local leaders to discuss the recent spate of gun violence in the five boroughs, including the fatal shootings of two NYPD officers.

Adams told Kiernan the president on Thursday “saw firsthand the [anti-gun violence] initiative that I talked about over the campaign trail and shared with him.” Biden also called for increased funding for community policing, as well as for the Justice Department’s Bureau of Alcohol, Tobacco, Firearms and Explosives (ATF), which works to combat firearms trafficking.

“He’s calling on Congress to allocate new dollars,” Adams said of Biden. “We have to free up the participation of city, state and federal law enforcement agencies, particularly the ATF, and we’re looking to get more dollars for them to identify the source of the guns that are coming to our streets, and just really, the partnership that I need on a federal level around ghost guns, and around how we continue to have really soft gun laws that are really proliferating our cities with guns.”

The mayor reiterated his plan to reinstate the NYPD’s controversial anti-crime policing unit, but said it would not be a “plainclothes unit.”

“The cars will be nondescript police vehicles, unmarked, but [the officers] will be in uniform apparel, and they will use their cameras,” he said. “But we’re going to target those who are known trigger pullers in our city.”

Adams also continued to promote his “Vegan Fridays” plan for public schools, which kicked off in cafeterias across New York City this week.

While the mayor said he had not yet tried the vegan options schools will be serving, he noted that students have been “taste-testing” the new menu items.

“This is not a philosophy. It is a healthy way of life,” he said, adding that his administration would continue to push for healthy food options in schools, hospitals and jails.

“Everywhere we feed New Yorkers, we’re going to give them healthy options, and not feed the healthcare crises,” he said.