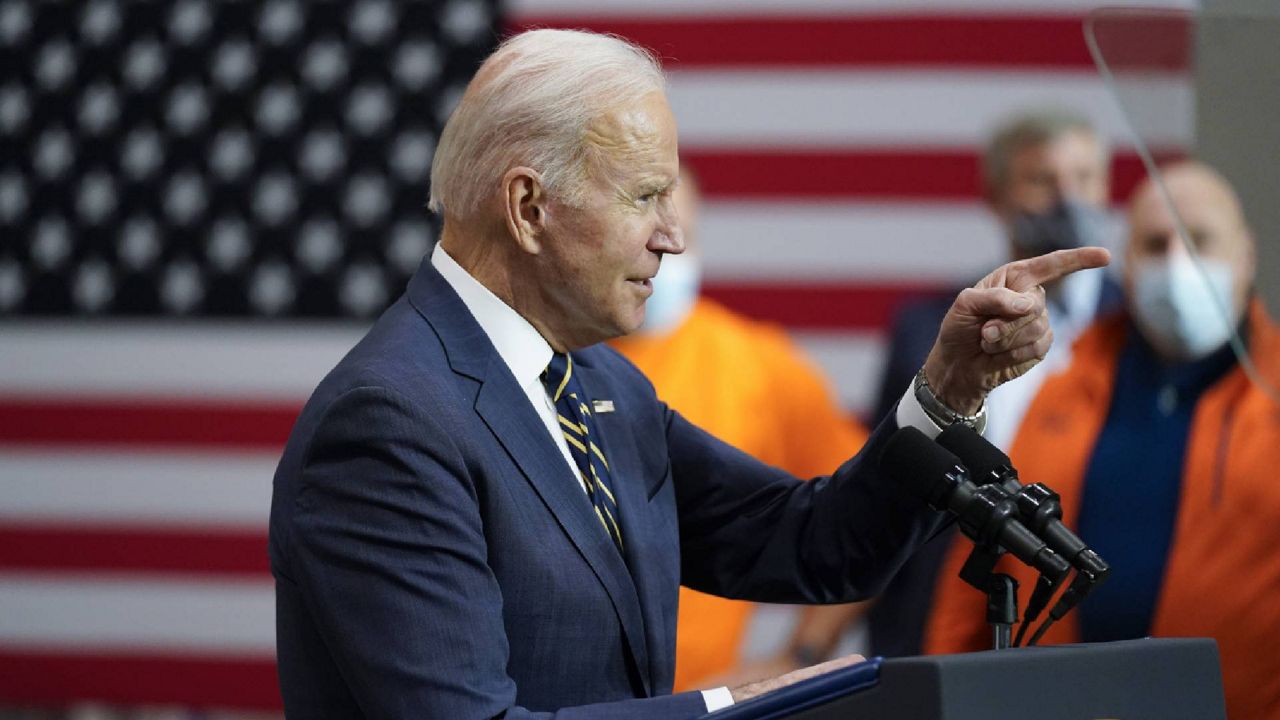 President Joe Biden traveled to Pittsburgh on Friday — a city where he held one of his first campaign events for his successful presidential campaign — to highlight a recent spate of good economic news and lay out his continued plan to rebuild the American economy and critical infrastructure.

Biden spoke at Mill 19, a major steel plant in the 1940s which has been converted into a research and development facility for Carnegie Mellon University, housing projects from advanced robots to artificial intelligence.

"To build a truly strong economy we need a future that's made in America," Biden said. "It means betting on America's workers. And it takes a federal government that doesn't just give lip service to buying America but actually takes action. That's the approach I've taken from day one. And now we're beginning to see the results."

The president highlighted the news this week that the U.S. economy grew more in the last year than it has since the 1980s.

Biden was introduced on Friday by Joseph "Joe" Burgess, a steel worker and member of the Local 1557 union, who thanked the president for guaranteeing steel and manufacturing jobs both today and in the future.

"Guess what? The middle class built this country, and unions built a middle class," Biden said.

The president touted how funds from his $1.2 bipartisan infrastructure law are already helping to boost critical infrastructure including roads, airports, ports and bridges.

Hours before Biden’s visit, a bridge collapsed in Pittsburgh, injuring 10 people, according to the city’s fire chief. The cause of the collapse is not yet known.

Biden toured the fallen bridge on Friday afternoon ahead of his event.

"It's astounding," Biden said. "You all realize I've been coming to Pittsburgh a long time, as a former Pennsylvanian, but I didn't realize that there are literally more bridges in Pittsburgh than in any other city in the world."

He noted there were about 45,000 bridges across the U.S. in poor condition.

The president on Friday said that he was "grateful for the first responders" who rushed to assist drivers and that he and the first lady were "keeping those injured" in their prayers.

This morning, the Frick Park Bridge collapsed in Pittsburgh. This afternoon, I visited the site and met with local officials. Jill and I are keeping those injured in our prayers, and we’re grateful for the first responders. They deserve an incredible amount of credit. pic.twitter.com/s6JwRiFpRX

Pennsylvania Rep. Conor Lamb, who is running for the Democratic nomination in the state’s open Senate race in 2022, attended Biden’s event Friday.

Attorney general Josh Shapiro, who is running for governor, was set to miss the event due to a scheduling conflict. Lt. Gov. John Fetterman, who is also running for Senate, initially had a scheduling issue, but ended up meeting up with Biden at the site of the collapsed bridge.

Friday’s visit was Biden’s second to Steel City since taking office last year. His previous visit, in March of 2021, was to pitch his sweeping infrastructure bill, passed months later, which will also expand broadband internet access and build a network of electric vehicle charging stations nationwide.

The visit to Pennsylvania was likely not just a homecoming for the Scranton-born president, but an opportunity for Biden to shore up support in a crucial state ahead of the 2022 midterms amid sliding poll numbers. The oft-reliably Democratic-voting state shocked the country in 2016 when it swung for Biden’s predecessor, Donald Trump, in 2016, but he flipped the state back blue in 2020.

The Pennsylvania Senate seat, which will be left vacant by retiring Sen. Pat Toomey, a Republican, is being eyed by both parties as an opportunity to win control of the chamber in the crucial 2022 midterm elections.