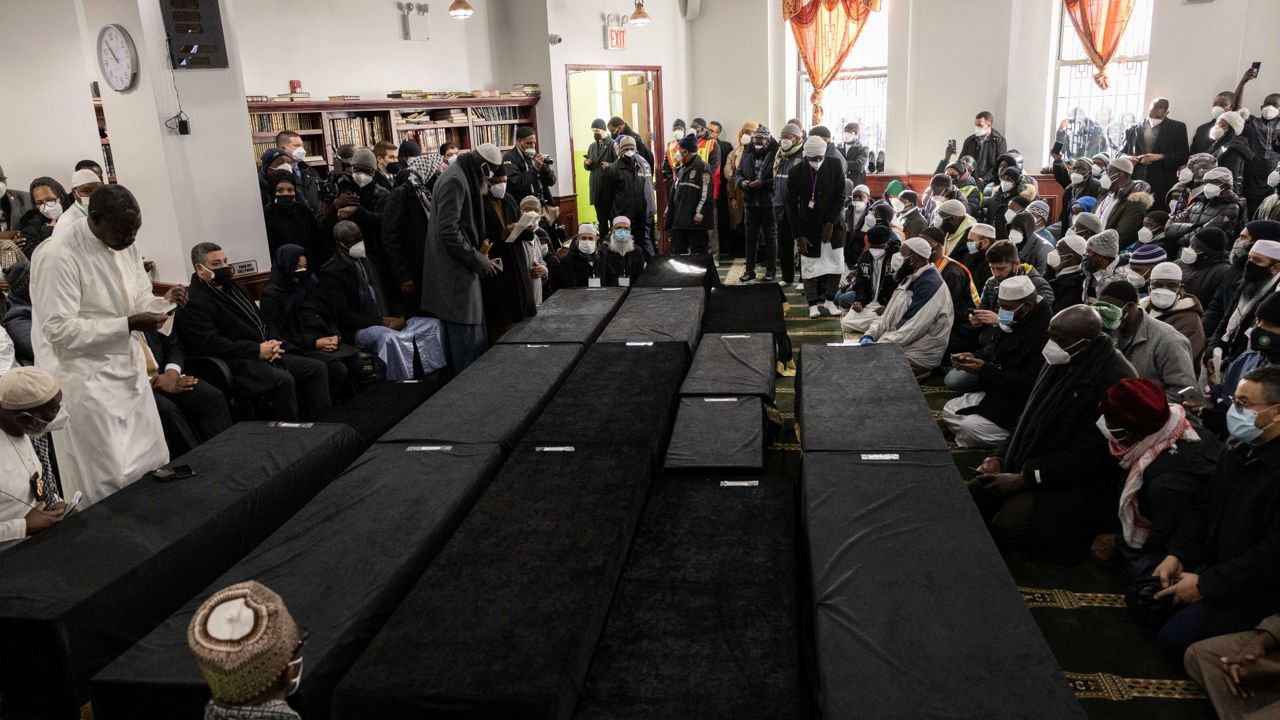 Caskets sit on the floor during the funeral service for victims from the apartment building which suffered the city's deadliest fire in three decades, at the Islamic Cultural Center for the Bronx on Sunday, Jan. 16, 2022, in New York. (AP Photo/Yuki Iwamura)

By Justine Re, Maya Rajamani, and Dean Meminger The Bronx
SHARE

NEW YORK — Hundreds of mourners gathered inside and outside the Islamic Cultural Center of the Bronx on Sunday for the funerals of 15 of the 17 people who died when a fire tore through an apartment building in Fordham Heights last week.

The Jan. 9 blaze at the Twin Parks North West complex killed nine adults and eight children, officials said. All 17 of the victims had ties to West Africa. Tents lined East 166th Street in the Concourse section of the Bronx Sunday morning in anticipation of a large turnout.


The 15 caskets that held the bodies of the victims were of different sizes, as those killed ranged in age from two to 50. Politicians including Mayor Eric Adams, Sen. Chuck Schumer, Attorney General Letitia James and Lt. Gov. Brian Benjamin spoke at the Muslim service before prayers began.

“As people of faith, the Quran states, in essence, those we lost belong to God. And today, we return them to God,” Adams said. “We have an obligation to be here for the families, and allow them to get the support they need to get through this period.”

“The American dream, for too many, burnt in that fire,” he added. “It is our obligation to make sure that the dream remains alive for all of us.”

Mourner Aminade Cisse, who came to New York from Guinea, said she attended the funeral to support the city's African community. 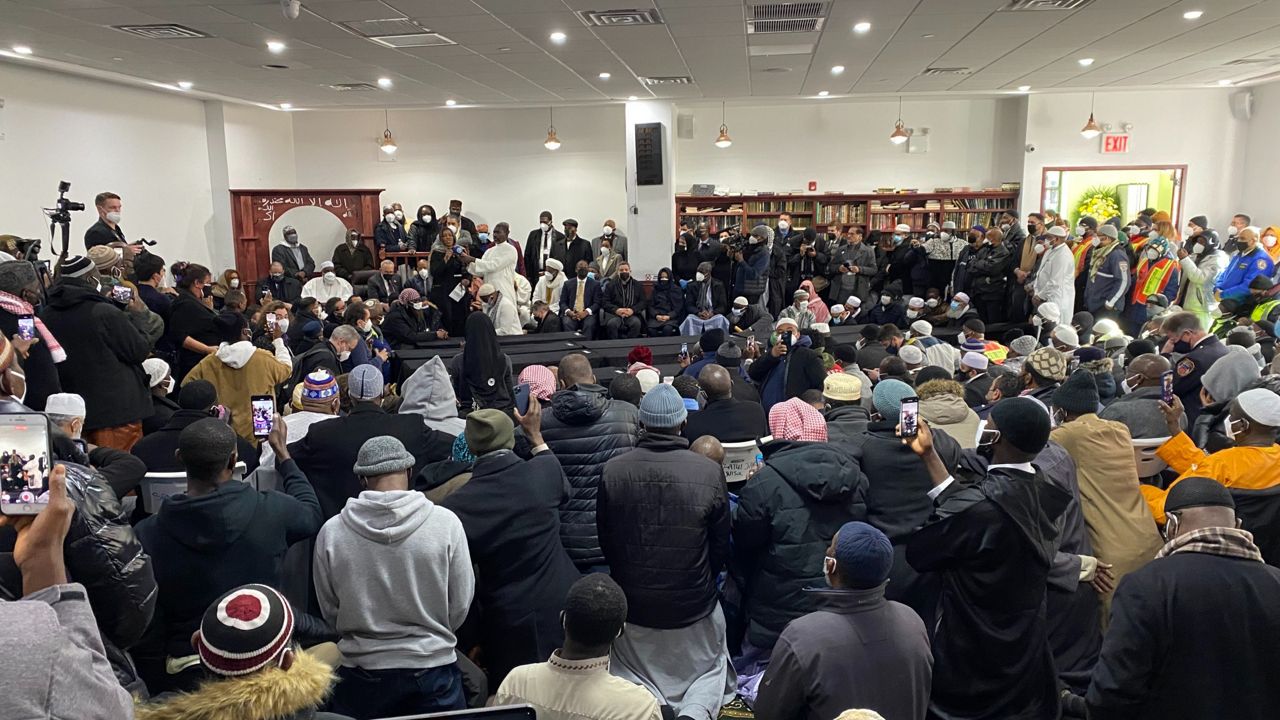 Mourners gather inside the Islamic Cultural Center of the Bronx on Sunday for the funerals of 15 of 17 people who died in an apartment building fire. (NY1/Richard Agostinoni)

"We are all the same. We are all African. When something like this happens, it’s like it happened to all the community," Cisse said. "That’s why I came, to represent my respect for the loss. God give, God taketh. All we believe is that. We are all going to go one day, but we pray for them, God give them the peace of mind.”

Among the victims were four members of one family: Fatoumata Drammeh, 50, and her children Foutmala Drammeh, 21, Nyumaaisha Drammeh, 19, and Muhammed Drammeh, 12.

Patricia Gittens and Ruth Watkis, who are extended extended cousins of the family, gathered alongside other mourners on Sunday. Crowds of people waited in the cold outside the center to paying their respects.

“It’s hard for everybody right now, so we are here for support, and to have our condolences here,” Watkis said.

Adams on Friday announced that every family affected by the fire would receive an “immediate” $2,250 payment, with more financial support to come from a relief fund that has raised more than $2.2 million.

Speaking at the service on Sunday, Benjamin said the state would also provide $2 million in assistance to aid tenants impacted by the fire. 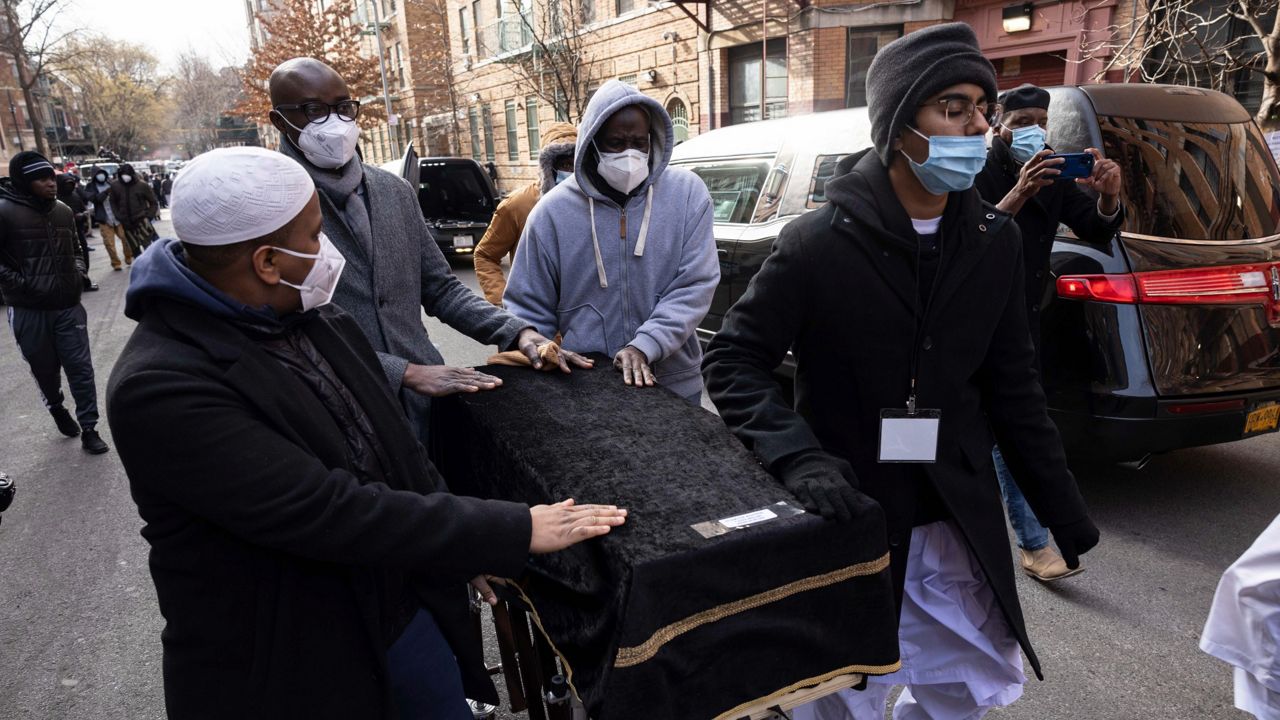 People move a casket of Ousmane Konteh, 2, to the hearse after the funeral service for victims from the apartment building which suffered the city's deadliest fire in three decades, at the Islamic Cultural Center for the Bronx on Sunday, Jan. 16, 2022, in New York. (AP Photo/Yuki Iwamura)

"I want all of you to know that we are all family, as Africans, as Muslims," Gibson said. "Whether you are from Gambia, Mali, Ghana, Guinea, Nigeria, it doesn't matter. We are all one people."

The U.S. Embassy in Gambia, Schumer told mourners, was closed due to COVID-19, but has reopened so relatives of the victims can secure visas to fly to New York to grieve with their loved ones.

Eleven of the victims will be laid to rest in New Jersey, while four will be going to Gambia for burials. Funerals for the two other victims were held this past Wednesday.

In their own remarks, both James and New York City Comptroller Brad Lander blasted the conditions that led up to the fatal fire.

“Every one of [the victims] should be here today,” Lander added. “But for heat that wasn’t enough, but for doors that didn’t close, but for inspections that were not enforced, but for oversight that failed to happen, but for a housing market that puts profit over human lives, they would be here today with us.”