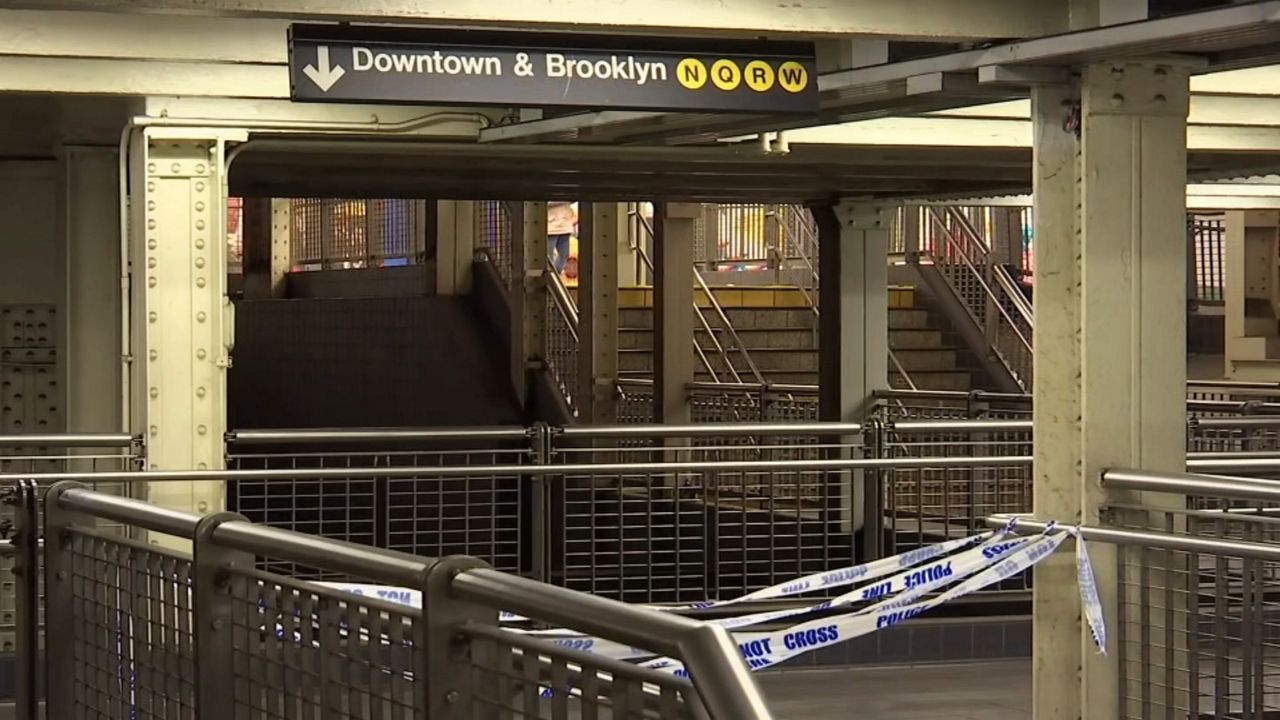 NEW YORK — A train fatally struck a woman after a man pushed her onto the tracks inside a Times Square subway station Saturday morning in a "senseless act of violence," officials said.

The 40-year-old Asian woman, identified by police as Michelle Alyssa Go, was standing on the NQR platform inside the Times Square—42nd Street station around 9:30 a.m. when a man pushed her in front of a southbound Q train, NYPD Commissioner Keechant Sewell said at a news briefing Saturday afternoon.

"This was a senseless, absolutely senseless act of violence," the commissioner said. "Our investigators are actively investigating this crime, and our uniformed offficers will remain vigilant throughout the subway system."

Less than 30 minutes after the incident, the man, later identified by police as Simon Martial, 61, walked into the NYPD's Transit Bureau District 2 station in lower Manhattan and told officers there he had pushed a woman in front of a train, Assistant Chief Jason Wilcox, of the NYPD's Detective Bureau, said at the briefing. He was taken into custody and faces murder charges.

Minutes before he pushed Go, Martial had an "encounter" with another female subway rider on the same platform, Wilcox said.

"He gets close to her, and she feels that he was about to physically push her onto the train [tracks]," he said. "As she’s walking away, she witnesses the crime where he pushes our other victim in front of the train."

The rider the man threatened before pushing Go was not Asian, but Sewell did not rule out the possibility that the fatal push was racially motivated, saying the department was still "investigating all avenues."

Martial, who may have been homeless, is "known to the criminal justice system" and has a "criminal background, Wilcox said, without providing specifics.

"He does have, in the past, three emotionally disturbed encounters with us," he said.

NYPD Chief of Transit Kathleen O'Reilly said six officers were assigned to the Times Square station on Saturday morning, two of whom were on the southbound NQR platform — but at its southern end — when police said Martial pushed Go.

Mayor Eric Adams, who spoke at the briefing, vowed to continue his push to improve transit safety throughout the city. Adams and Gov. Kathy Hochul earlier this month said they would increase NYPD presence in subway stations and on trains as part of an effort to crack down on transit crime.

Today, a woman entered the subway station, like any New Yorker, just trying to get where she needed to go.

Our hearts break for her and her family. I thank the men and women of the NYPD for their quick work in apprehending the suspect. https://t.co/EpruHTPGDi

“A woman lost her life [today] due to a senseless act of violence. And when you look at this incident, it really highlights why the commissioner and I rolled out a very significant plan of dealing with one, crime in our system, but also the mental health crises that we are facing,” Adams said.

“To lose a New Yorker in this fashion will only continue to elevate the fears of individuals not using our subway system,” he added. “This is a traumatic experience to enter this system with the hope of reaching your destination, only to come to the conclusion that your loved one lost his or her life due to a tragic moment such as this. We’re going to continue to do everything that’s possible to make our subway system safe.”

“We need to have an aggressive program of action to deal with people who may be experiencing mental health issues, as the mayor has highlighted just now,” he said.

In a statement provided to NY1 on Saturday, TWU Local 100 Vice President Canella Gomez, whose union represents the city's train operators and conductors, offered his condolences to the victim's family.

"This is such a tragedy. No passenger or employee should ever have to worry about their safety in the NYCT subway system," Gomez said. "Clearly no train operator comes to work expecting to have a passenger thrown in front of his or her train. This is the part of the job that no one is ever truly physically, mentally, or emotionally prepared for."

The operator of the train that struck Go was receiving medical assistance at Bellevue Hospital as of Saturday afternoon, Gomez added.

At Adams' joint news briefing with Hochul earlier this month, Adams said the NYPD's "omnipresence is the key."

“People feel as though the system is not safe because they don’t see their officers," he said.

Overall crime in the subway system did hold steady in 2021 compared to 2020, and was down by approximately 30% from 2019 and 2018, crime statistics through late December show.

Hochul on Saturday afternoon tweeted that she was "horrified by the tragedy at Times Square today."

Horrified by the tragedy at Times Square today. My heart is with the victim’s loved ones and with all who witnessed and responded to the devastating incident.

We will continue working with @NYCMayor to ensure everyone feels safe in our subway system.

"My heart is with the victim's loved ones and with all who witnessed and responded to the devastating incident," she wrote. "We will continue working with @NYCMayor to ensure everyone feels safe in our subway system."