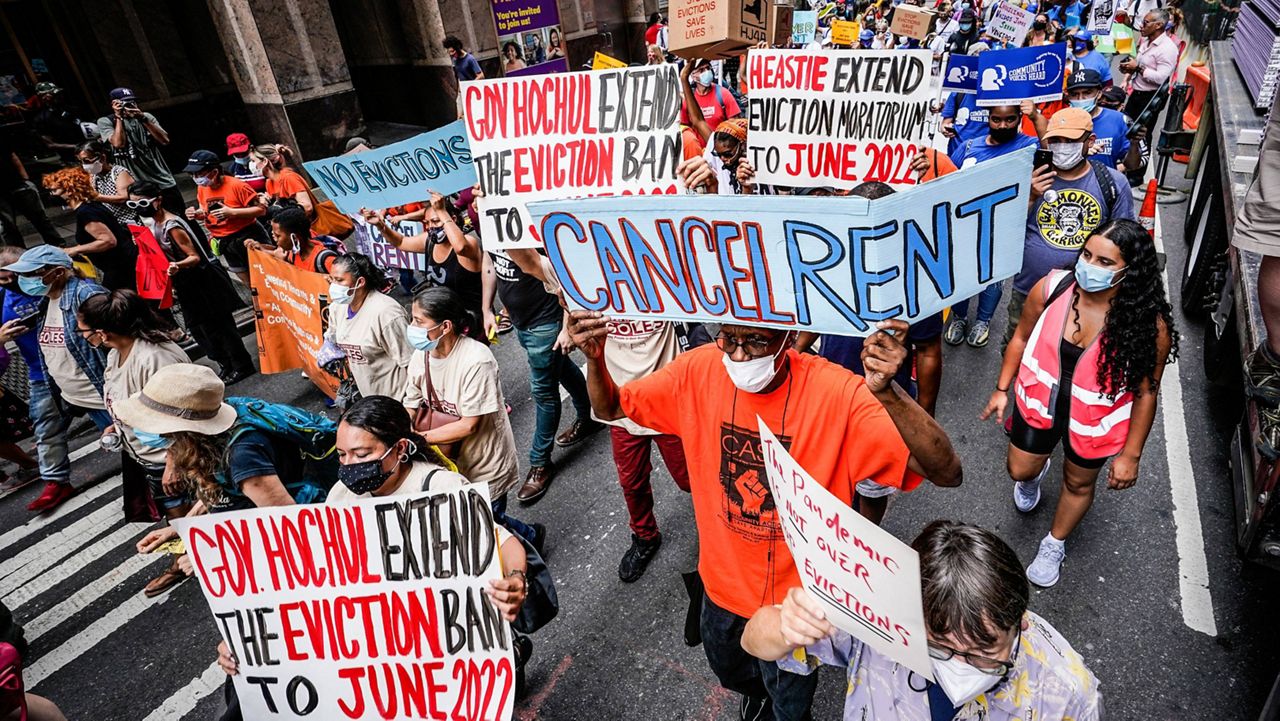 Prices paid by U.S. consumer jumped 7% in December from a year earlier, the highest inflation rate since 1982 and the latest evidence that rising costs for food, gas, rent and other necessities are heightening the financial pressures on America's households.

Inflation has spiked during the recovery from the pandemic recession as Americans have ramped up spending on goods such as cars, furniture and appliances. Those increased purchases have clogged ports and warehouses and exacerbated supply shortages of semiconductors and other parts. Gas prices have also surged, in part because Americans have driven more in recent months after having cut back on travel and commuting earlier in the pandemic.

In a statement, President Joe Biden said that Wednesday's report shows progress, but there is still much that needs to be done to reduce consumer prices.

"Today’s report — which shows a meaningful reduction in headline inflation over last month, with gas prices and food prices falling — demonstrates that we are making progress in slowing the rate of price increases," Biden said. "At the same time, this report underscores that we still have more work to do, with price increases still too high and squeezing family budgets."

"Inflation is a global challenge, appearing in virtually every developed nation as it emerges from the pandemic economic slump," the president continued. "America is fortunate that we have one of the fastest growing economies — thanks in part to the American Rescue Plan — which enables us to address price increases and maintain strong, sustainable economic growth. That is my goal and I am focused on reaching it every day."

Rising prices have wiped out the healthy pay increases that many Americans have been receiving, making it harder for households, especially lower-income families, to afford basic expenses. Polls show that inflation has started displacing even the coronavirus as a public concern, making clear the political threat it poses to President Biden and congressional Democrats.

A significant portion of inflation is still being driven by pandemic-driven mismatches between demand and supply. Used car prices have soared more than 37% over the past year because new new car production has been restrained by shortages of semiconductors.

The Biden administration is "working relentlessly to try to ease some of the supply-side pressure, some of the snarl-ups in the supply chain that are leading to very high prices," particularly for used cars and semiconductors, White House economic adviser Jared Bernstein told Spectrum News in an interview on Wednesday.

Bernstein pointed to the administration's recent actions on ports — allowing some to stay open later and imposing taxes on goods that did not move fast enough — as well as its November release of 50 million barrels of oil from its petroleum reserves as evidence of Biden's dedication to lowering costs for Americans.

"Getting goods from ship to shelf is a real goal of this president and one that we're helping to achieve," he added. "But we need to keep pressing. We can't stop until these prices ease on American consumers."

Still, shortages and higher prices at U.S. grocery stores have also grown in recent weeks as new problems, like the omicron variant and severe weather, have compounded supply-chain problems. Some restaurants have even passed along higher labor and food costs onto their customers.

On Tuesday, Chair Jerome Powell told Congress that if it becomes necessary to fight high inflation more aggressively, the Federal Reserve is prepared to accelerate the interest rate hikes it plans to begin this year. Fed officials have estimated that they will raise their benchmark short-term rate, now pegged near zero, three times this year. Many economists envision as many as four Fed rate hikes in 2022.

Those rate increases would likely increase borrowing costs for home and auto purchases as well as for business loans, potentially slowing the economy. The rate hikes also mark a sharp reversal in policy by Fed policymakers, who as recently as September had been split over whether to raise rates even once this year. The Fed is also rapidly ending its monthly bond purchases, which were intended to lower longer-term interest rates to encourage borrowing and spending.

Yet the Fed’s quick pivot hasn’t quelled questions from many former Fed officials, economists and some senators about whether the Fed has acted too slowly to end its ultra-low-interest rate policies in the face of accelerating inflation — and put the economy at risk as a result.

In his testimony to Congress on Tuesday, Powell said the Fed mistakenly believed that supply chain bottlenecks that have helped drive up the prices of goods wouldn’t last nearly as long as they have. Once the supply chains were unsnarled, he said, prices would come back down.

Yet for now, the supply problems have persisted, and though there are signs that they are loosening in some industries, Powell acknowledged that progress has been limited. He noted that many cargo ships remain docked outside the port of Los Angeles and Long Beach, the nation’s largest, waiting to unload.

With the Biden administration facing public discontent over the rise in inflation, the president has said his administration’s investments in ports, roads, bridges and other infrastructure would help by loosening snarled supply chains.

Bernstein on Wednesday doubled down on Biden's words, saying while the Fed is responsible for maintaining full employment at stable prices, the White House can help by working to "narrow supply chains," adding: "But when it comes to the real macro-economic work of moving interest rates to achieve those goals of the Federal Reserve, that's their knitting, and we stay out of that basket."