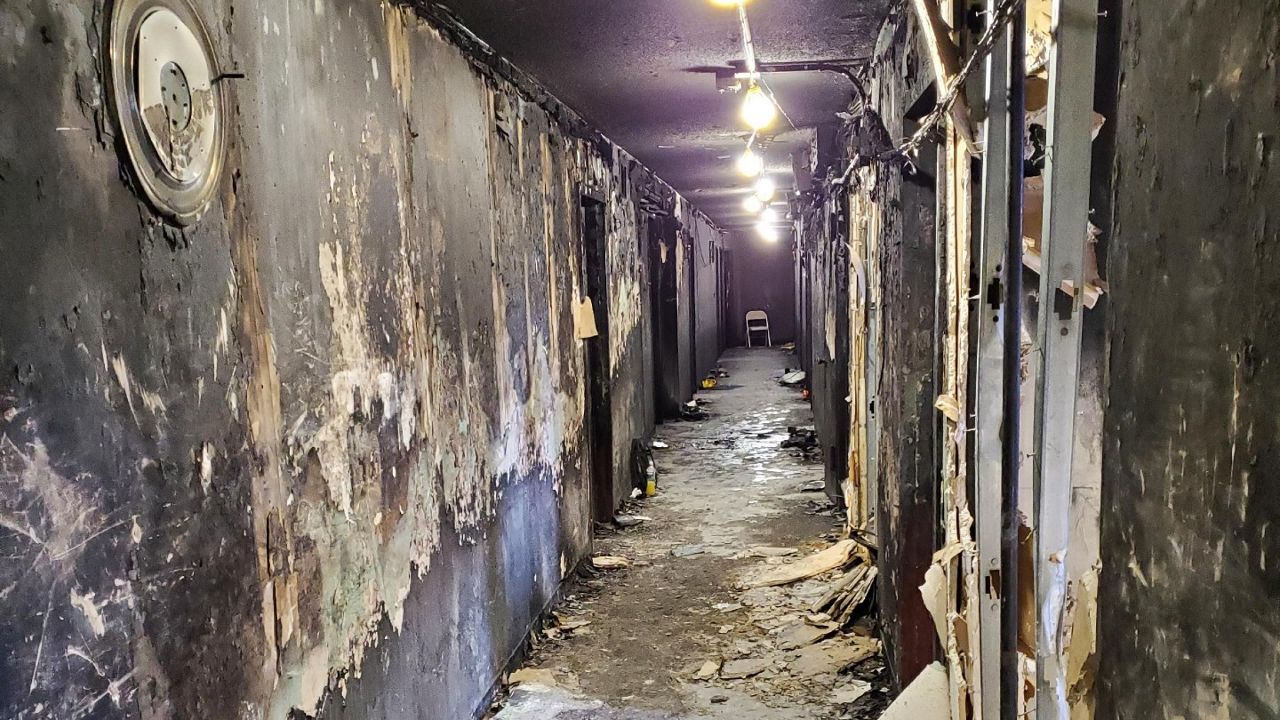 The third floor of the Fordham Heights building where the fire broke out. (NYC Department of Buildings)

BRONX, N.Y. — The FDNY and the city's Department of Buildings on Wednesday released photos and videos showing the aftermath of a horrific fire that killed 17 people in the Bronx on Sunday.

A photo released by the DOB showed the charred third floor of the Twin Park North West building in Fordham Heights, where the blaze broke out Sunday morning. The FDNY also released a video that revealed some of the damage the building sustained.

On Sunday, January 9, FDNY members operated on scene of a 5-alarm fire at 333 East 181 Street in the Bronx. The door to the fire apartment was left open. Be #FDNYSmart – CLOSE THE DOOR as you make your exit. See more tips at https://t.co/NpwdRdlElY. pic.twitter.com/8iCV6mcqUO

On Tuesday night, members of the clergy led prayers for a distraught community mourning the deaths of the victims. Vanessa Carlo, who attended the candlelit ceremony, said her daughter was a classmate of one of the young victims.

“We decided to come to the vigil to pay our respects to the families, to our community,” Carlo said. “We’re all working together to make sure they’re getting everything that they need.” 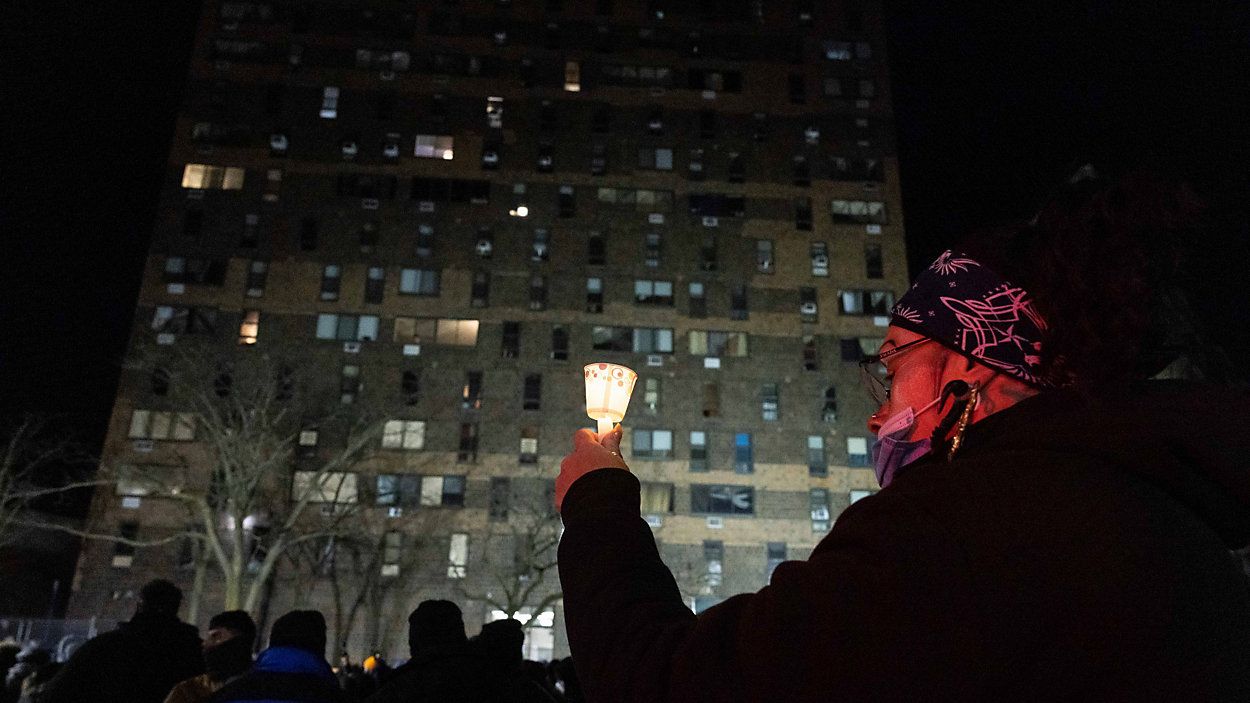 A person holds a candle during a candlelight vigil outside the apartment building which suffered the city's deadliest fire in three decades, in the Bronx on Tuesday, Jan. 11, 2022, in New York. (AP Photo/Yuki Iwamura)

Bronx Borough President Vanessa Gibson spoke at the vigil, promising support for any family affected by the horrific blaze.

“We are not gonna leave you during your greatest time of need,” Gibson said. “No matter what you need, from temporary housing to counseling, shelter, financial assistance, trauma-informed care, we’re going to be with you every step of the way.”

While the community grieves, more details were released about those who perished in the deadly fire, including the names and ages of all 17 victims.

The deceased have been identified as:

Since the fire, tenants have filed a pair of class action lawsuits against the owners of the building and the city of New York, claiming they failed to make sure all of the steel apartment doors inside the building were self-closing, failed to provide “adequate and lawful” heat and did not ensure that all of the building’s smoke detectors were functional, among other violations.

A spokesman for the city’s Law Department on Wednesday said the fire was a “horrific tragedy,” adding that “too many lives were lost.”

“There is an active investigation into this tragic incident,” the spokesman said. “We’ll review the claim.”

“We are devastated by this terrible tragedy and are cooperating fully with the Fire Department and other agencies as they continue to investigate,” the group said.

Ishak Drammeh said he lost his wife and three children in the fire. He says he has not been able to see his wife, or a picture of her, to confirm she is dead.

Drammeh said his family lived on the 15th floor and could not get out of the building.

He said he is leaning on his Muslim faith, and although their loss is devastating, he believes his family members are in a better place.

Another uncle, Adama Dukuray, reflected on times spent with his great-nieces and great-nephews.

Janneh says he desperately searched for his family in the smoke and it took him 45 minutes to get out of the burning building.

“My wife told me that our daughter was taken to the ambulance. She was crying," he said. "I asked, 'What about the other one?' and she said, 'I don’t see her.'”

Janneh’s 19-year-old daughter was treated at the hospital.

Janneh says his tight-knit Gambian community gives him strength while he finds refuge in his faith, praying at his mosque on Webster Avenue while he tries to plan a funeral for his oldest daughter.

"God created everyone. He gives and he take it away,” he said.

The city Office of Chief Medical Examiner on Tuesday said all victims from Sunday's high-rise fire in the Bronx died from smoke inhalation. The OCME also notes the manner of death is "accident."

Law enforcement sources said the children who died included three from the same family. In total, 17 people lost their lives, including eight children. The initial death toll was lowered from 19 to 17 on Monday.

The miscount is being blamed on the fact that the victims were spread across so many hospitals.

Families are still waiting for many bodies to be released so they can make funeral arrangements. The Masjid-Ur-Rahmah mosque said many of the victims were immigrants from Africa who were members of the mosque.

The mosque's imam, Musa Kabba, said he is now planning one large funeral as early as Friday or Saturday. Meanwhile, a federal investigation is underway, in addition to the city fire department's investigation.

Fire officials quickly zeroed in on a malfunctioning space heater as the cause of the initial fire.

Sources told NY1 that multiple space heaters were running in the apartment at the time of the fire. The space heater that caught fire had been running for several days, according to sources.

The heat in the 19-story building was turned on.

During an appearance on "Mornings On 1" Tuesday, Bronx Borough President Vanessa Gibson said she toured the apartment where the fire broke out Sunday.

She said it was important to look at all factors, including why the tenant was using a space heater.

"If you do not get sufficient heat from your landlord, you have to do what is necessary to protect you and your family, particularly when you have older adults and children in your household," said Gibson. "And we're not blaming any tenants, but we certainly have to work with landlords and property owners to provide sufficient heat, hot water, ventilation, HVAC, fire escapes, working smoke alarms and fire systems and self-closing doors that must work."

Smoke remains the most critical factor in the investigation.

Fire department officials have focused their investigation into the fire on malfunctioning doors that did not close despite having automatic closure mechanisms. The entry door to the apartment where the fire began, as well as at least one other door, from the stairwell onto the 15th floor, did not close, allowing smoke to quickly fill the 19-story building.

Yet fire officials may not be able to determine why the door to the apartment where the fire began was not closing, according to Fire Department Commissioner Daniel Nigro.

“It was so deformed from the heavy fire that our marshals are having great difficulty determining why it didn't close,” Nigro said on WCBS 880 Tuesday.

The fire spread from that apartment into the second-floor hallway, causing significant damage.

Nigro said the fire marshals investigating the blaze expected to have better luck understanding the problem with the 15th floor door.