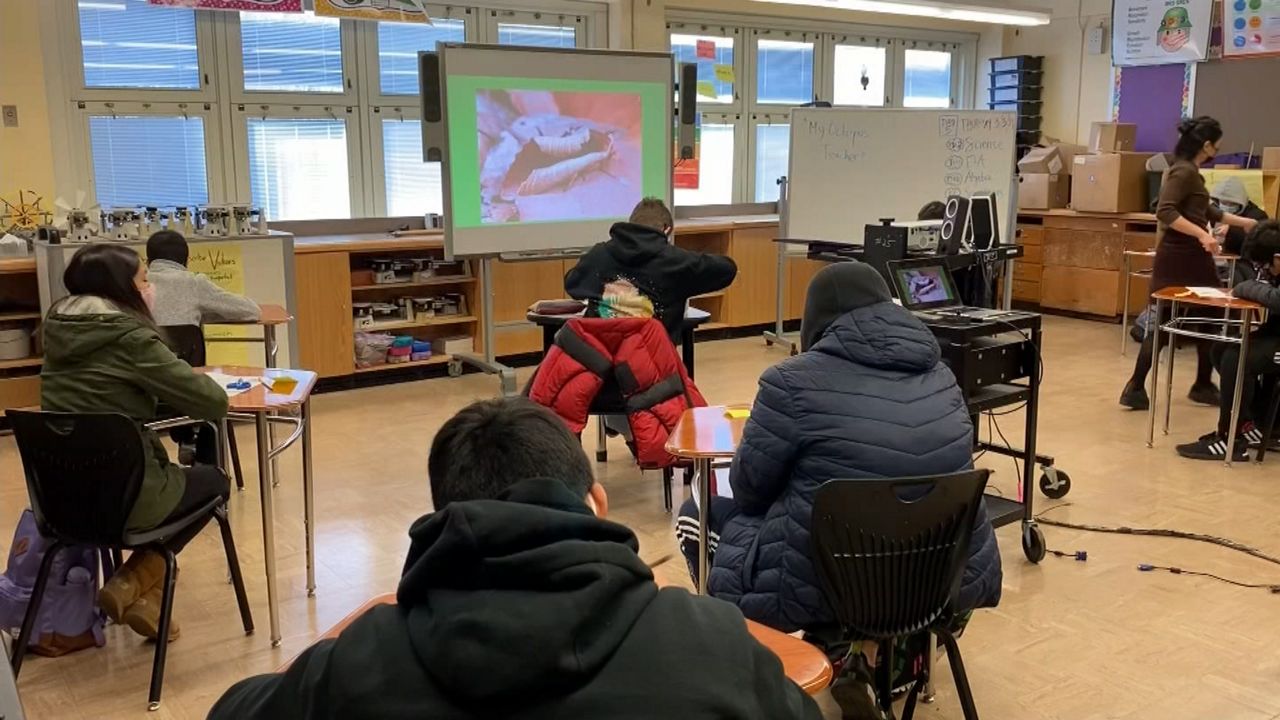 With the number of students and staff contracting coronavirus on the rise, the number of them attending school the first day back from winter break was down.

Anna Meyer teaches at Bronx Latin, a high school where just 47% of students were in school Monday. She said her classes were still only half full Tuesday.

“We teach in a neighborhood that right now has about a 40% positivity rate, so it seems like a lot of families and students are either sick or quarantining or really scared of being in school right now,” she said.

The school technically isn't offering remote learning, but some teachers, like Meyer, are trying their best to reach students who have stayed home anyway.

“I’m trying to teach and share my screen, talk to them on Zoom, talk to the kids who are here, which is imperfect,” she said.

And fewer students are taking advantage of those remote lessons than when official remote learning was taking place, in part, Meyer thinks, because some are sick.

The low attendance and increase in cases is also making it harder to engage students who are in class, she said.

“They don’t feel safe in school, they’re hearing from their parents that they shouldn’t be here,” Meyer said. “I think there’s especially this vibe of, like, why should I be caring, why should I be trying when it’s not clear that the city is doing enough to protect me at school right now?”

Attendance was particularly low at high schools: On Monday, just 19.5% of students were present at City as School, in Manhattan. Still, Mikayla Rodriguez was glad the school was open.

"It's better than being home and doing nothing to be honest, because it gets boring,” Mikayla said.

But Stephany Farmer, who was picking up her grandchildren at P.S. 287 in Brooklyn, saw things differently.

"I believe the schools should be closed. Let the kids stay home and do the virtual, that's the way I see it. Because these kids are getting sick again,” Farmer said.

Only 46% of students attended that school on Monday.

"The parents is looking at, well let me keep them, or hopefully they don't have that COVID. I'm hoping and praying that everybody is well, but if they're keeping them home it's for a reason,” Farmer said.

Laura Bruno, a parent at the same school, says she feels parents haven’t been consulted enough in the school system’s response to the virus.

As for the absence rates at her child’s school, she says if kids get a choice, many will choose to stay home. But the time they’ve previously spent in remote learning has led many of them to struggle socially.

"They also need to understand, while you were at home for two years, you were starving for socialization, you missed your friends, then when you got back in that social environment, a lot of them forgot how to accept each other, deal with each other,” she said.