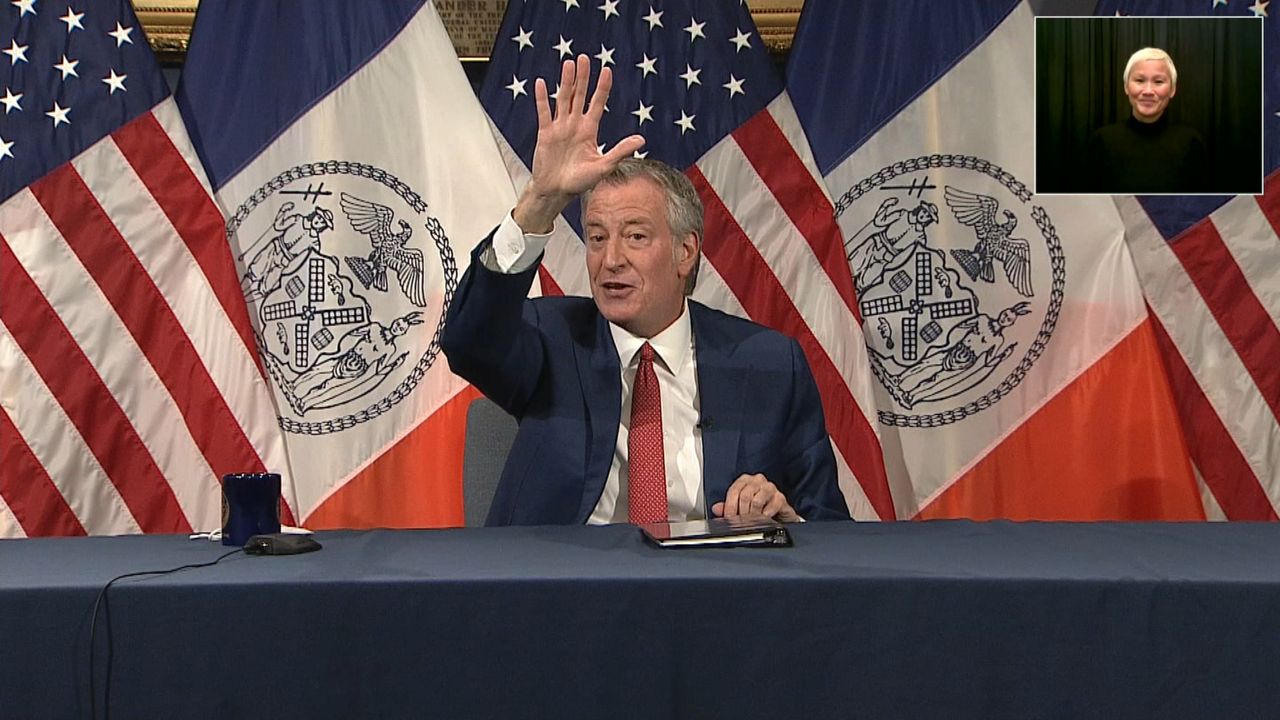 Bill de Blasio waves farewell during his final news conference as mayor on Dec. 30, 2021. Image courtesy of the mayor's office.

'This is a hero city': De Blasio reflects on last 8 years as he leaves City Hall

NEW YORK — Mayor Bill de Blasio on Thursday marked his final day at City Hall by looking back at his administration’s accomplishments, thanking his family for their support and praising New Yorkers for their “heroism” throughout the COVID-19 pandemic.

At a news briefing held shortly before he departed City Hall for the last time as mayor, de Blasio — accompanied by his wife Chirlane McCray and his son Dante — highlighted the efforts he undertook to tackle issues including income inequality during his eight years in office.

“Eight years ago, we had a vision of fighting inequality. We really believed it had to be done. We felt it urgently,” he said. “And I knew that if this city didn’t change, we weren’t going to make it in the long term — it just wasn’t going to work. I really felt, at times, that the New York City we loved was slipping away.”

The mayor touted his rollout of universal pre-K and 3-K, his expansion of paid sick leave and the construction of thousands of affordable apartments during his tenure as lessons in “never accept[ing] when you’re told something can’t happen.”

A video he played during the briefing also spotlighted his administration’s role in reducing the city’s poverty level, rolling out a $15 minimum wage, ending stop-and-frisk and improving mental health resources, among other efforts.

The outgoing mayor also credited New Yorkers for their response to the ongoing COVID-19 pandemic.

“For my family, for all of us, there’s no words for how special this has been, but I will tell you that I came in the door loving this city deeply, and loving its people deeply,” he said. “I have come to love you even more, because I’ve seen the heart and soul of this city. I’ve seen how good the people are.”

Initially, de Blasio was set to officially walk out of City Hall, like mayors have done at the end of their tenures before him.

But instead, outside of City Hall's gates were protesters. Some were waving Trump flags. But their jeers could be heard from inside City Hall. As a result, the festivities were moved inside.

No ceremonial exit, but a tribute to staff in City Hall's rotunda.

"What we did here in these eight years has profoundly changed this city and the effects of what we have done have only begun to be felt," the mayor said to the crowd. Staff members from years past all gathered around to hear his final thoughts. Some had tears in their eyes.

De Blasio is still coy on his plans for the future. He will move back to Brooklyn and continue to contemplate a run for statewide office. We asked when we could know more:

"The time to speak about the future is up ahead a little bit in the future,” de Blasio said. “Not going to do that today. Whatever plans I have I will be talking about very, very soon.”