In this image provided by The White House, President Joe Biden speaks with Russian President Vladimir Putin from his Delaware home on Thursday Dec. 30, 2021.

Biden to speak with Ukrainian leader after Putin call, amid border tensions with Russia

WILMINGTON, Del. — President Joe Biden on Thursday spoke with Russia's president Vladimir Putin for the second time this month as tensions persist over the Kremlin's placement of troops near the Ukrainian border, during what one official described as a "moment of crisis" for the region.

Biden on Thursday "urged Russia to de-escalate tensions" with Ukraine and made clear that the U.S. will "respond decisively" if Russian troops further infringe on Ukrainian territory, according to a White House summary of the call.

The main goal of the conversation was to set the intention for security talks between the two countries scheduled for early January, a senior administration official said Thursday evening, and the tone of the call was "serious" as the two leaders framed their positions.

President Putin had specifically requested the end-of-year call, and it comes as the U.S. works with European allies "on a common approach" to Russia’s military build-up on the border with Ukraine.

Thursday's conversation lasted about 50 minutes, according to the White House, and was by phone only. President Biden took part from his Wilmington, Del. home.

President Biden "laid out two paths" to Putin, a senior official said: one of diplomacy and de-escalation versus one of deterrence if Russia does not back down. The latter option would include economic costs, an increase in NATO forces in the region and additional assistance to Ukraine.

Senior U.S. and Russian officials are set hold security talks on Jan. 10 in Geneva to discuss the situation, and Thursday's call was a chance to set the tone.

"Both leaders acknowledged that there were likely to be areas where we could make meaningful progress," a senior administration official said of the upcoming dialogue.

Secretary of State Antony Blinken held a call with NATO secretary general Jens Stoltenberg following the discussion between Biden and Putin, per a statement from the State Department. The allies remain "ready for meaningful dialogue with Russia, while standing united to deter further aggression against Ukraine," the statement read in part.

Blinken also spoke with Canada's foreign minister Mélanie Joly on a number of shared priorities, including "a strong, united response to further Russian aggression against Ukraine, and a willingness among Allies and partners to impose massive consequences and severe costs on Russia for such actions," per a statement.

President Biden plans to hold a call with Ukrainian president Volodymyr Zelenskyy on Sunday, per the White House, in order to "reaffirm U.S. support for Ukraine’s sovereignty and territorial integrity, discuss Russia’s military build-up on Ukraine’s borders, and review preparations for upcoming diplomatic engagements to help de-escalate the situation in the region."

New: President Biden will speak with Ukrainian President Zelenskyy by phone on Sunday, according to a WH official.

In mid-December, the Kremlin published documents outlining its demands for the U.S. and NATO, which included a call for the alliance to deny Ukraine membership and for NATO to draw down its military presence in Central and Eastern Europe.

The U.S. is unlikely to accept those proposals, and they have made it clear that decisions about NATO membership are up to each country themselves, not Russia.

One senior administration official on Wednesday called the Biden-Putin conversation valuable at this stage because "we are at a moment of crisis and have been for some weeks now given the Russian build-up," noting the need for a "high level of engagement" to come to a solution.

On Thursday it appeared that concrete progress would be more likely after January's talks. 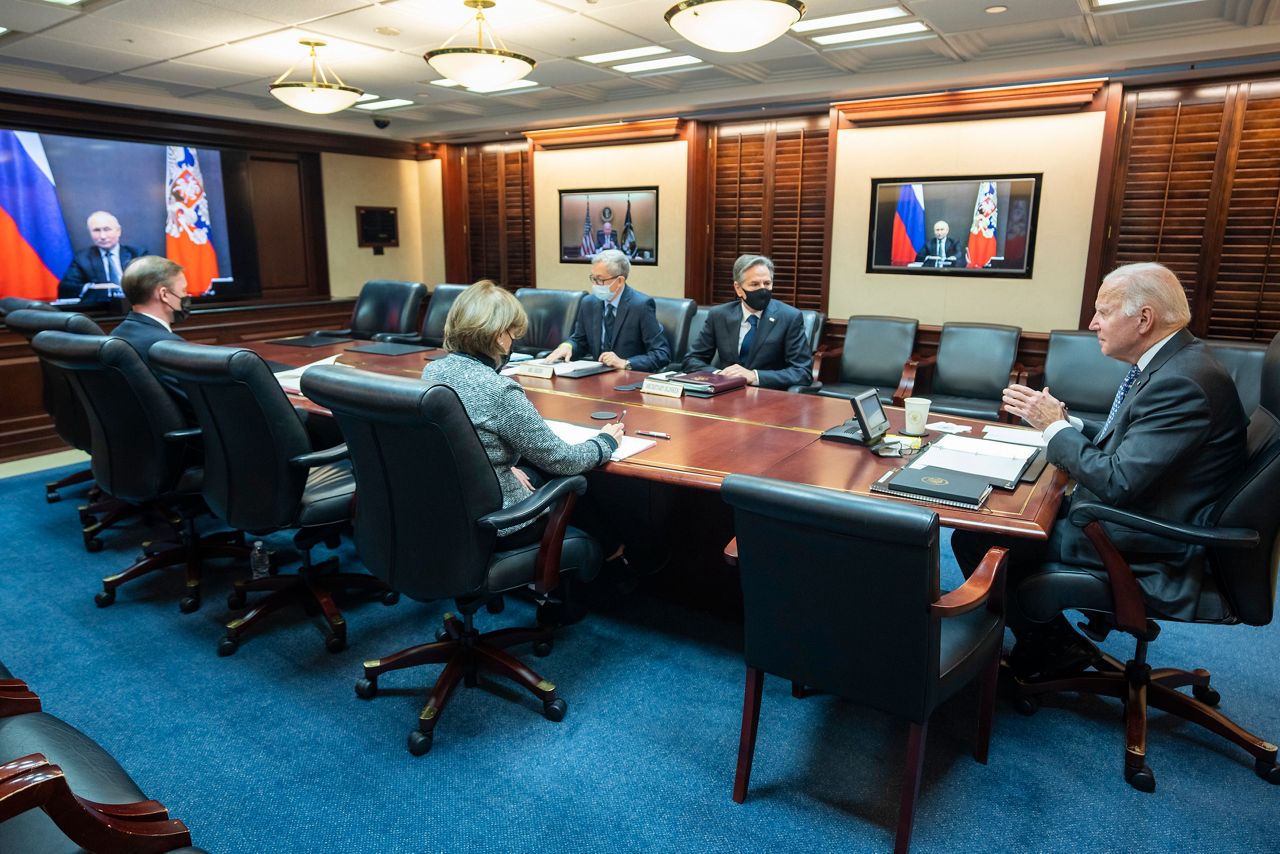 In his first December call with Putin, Biden "expressed deep concerns" related to "Russia’s escalation of forces surrounding Ukraine" warned Putin that the U.S. and its allies "would respond with strong economic and other measures in the event of military escalation."

Biden noted that sending U.S. troops to defend Ukraine against a possible Russian invasion is "not on the table."

"The idea the United States is going to unilaterally use force to confront Russia invading Ukraine is not in the cards right now," Biden said. "What will happen is there will be severe consequences."