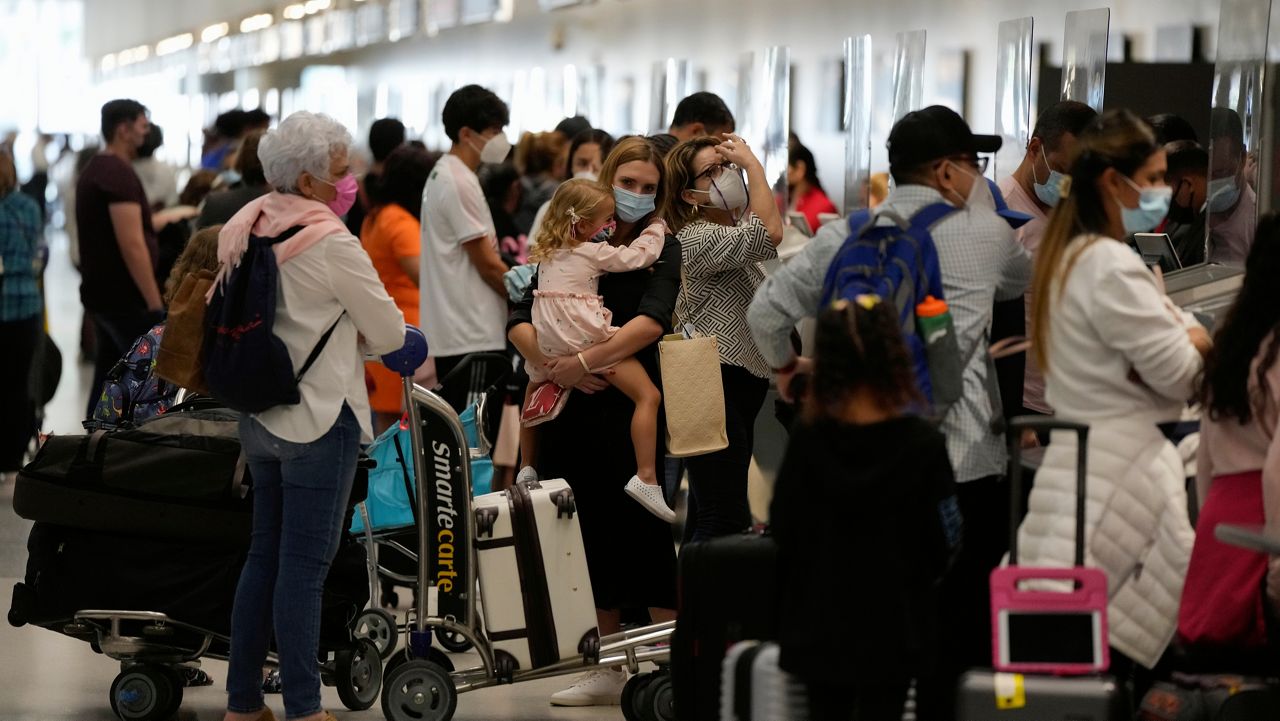 As flight cancellations continue to wreak havoc on holiday travel, in part due to the surge in COVID-19 cases nationwide, the nation’s top infectious disease expert said that the United States should “seriously” consider a vaccine mandate for domestic travel.

The disruptions are caused, in large part, by staffers calling out sick due to COVID-19, which comes as cases are surging in the U.S. driven by the highly contagious omicron variant – though wicked winter weather has also played a role.

Delta, United, JetBlue and American, four of the largest domestic airlines, have all blamed staffing shortages. United told The Associated Press that it canceled 115 flights on Monday due to staff members out with COVID-19, out of the more than 4,000 the Chicago-based airline has scheduled.

While these figures of impacted flights are just a fraction of the total number worldwide, it’s indicative of the issues airlines have faced this year amid the COVID-19 pandemic. Airlines encouraged workers to quit in 2020 when air travel collapsed, and were caught short-staffed this year as air travel rebounded faster than almost anyone had expected.

Meanwhile, Dr. Anthony Fauci, President Joe Biden’s chief medical adviser, told MSNBC on Monday that a vaccine mandate for domestic travel could be a strong incentive for Americans to get inoculated against the coronavirus.

“When you make vaccination a requirement, that’s another incentive to get more people vaccinated, Dr. Fauci said. “If you want to do that with domestic flights, I think that’s something that seriously should be considered.”

Dr. Fauci expressed similar on Sunday on ABC’s “This Week,” saying that “anything that could get people more vaccinated would be welcome.”

The show’s anchor, Jonathan Karl, asked Dr. Fauci about comments President Biden made in a recent interview with the network, where he said that a vaccine requirement for domestic travel “isn't necessary at this time.”

Dr. Fauci responded by saying “it depends on what you want to use it for.”

“Vaccine requirements for people coming in from other countries is to prevent newly infected people from getting in to the country,” he continued. “A vaccine requirement for a person getting on the plane is just another level of getting people to have a mechanism that would spur them to get vaccinated.”

“Namely, you can't get on a plane unless you're vaccinated, which is just another one of the ways of getting requirements, whatever that might be,” he added.

Currently, air travelers over two years of age, regardless of vaccination or citizenship status, must show documentation of a negative viral COVID-19 test before flying into the country. All foreign nationals must also be fully vaccinated as well and provide proof of vaccination in order to travel to the U.S. by plane. There are currently no such mandates for domestic travel.

Two officials told The Associated Press that Biden’s science advisers have yet to make a formal recommendation for such a requirement to the president. The officials noted that a vaccine mandate on planes could trigger a host of logistical and legal concerns.

Airlines have called on the Biden administration to shorten the guidelines for the isolation period for vaccinated workers who get COVID-19, in order to ease staffing shortages.

“To address the potential impact of the current isolation policy effectively, we propose an isolation period of no more than 5 days from symptom onset for those who experience a breakthrough infection,” Nicholas Calio, president and CEO of Airlines for America, an airline lobbying group, wrote in a letter to CDC Director Rochelle Walensky.

“In turn, those individuals would be able to end isolation with an appropriate testing protocol,” Calio continued. “As an industry, we stand ready to partner with the CDC to make scientifically sound policy decisions and work with you to collect empirical data necessary to appropriately monitor any guideline modifications.”

The union for flight attendants has pushed back against that, saying that those decisions should be “based on science, not staffing, and they should be made by public health professionals, not airlines.”

“The current climate in the passenger cabin is highly stressed,” Sara Nelson, president of the Association of Flight Attendants-CWA, wrote in a separate letter to Dr. Walensky. “We are experiencing a record high number of aggressive passenger incidents, many of which are fueled by alcohol and refusal to comply with onboard mask rules.”

"Staffing flights with crewmembers who may still be symptomatic, infectious, or both by shortening them on necessary isolation time will only make the situation worse,” Nelson continued. “Flight attendants should not be expected to return to work until they test negative and do not exhibit symptoms. We do not know if 10 days represents that ‘magic number’ but we do not see the justification for reducing the number of days at this time.”

The news also comes after a number of airline executives recently testified before the Senate Commerce Committee.

One airline executive told the panel that face masks “don't add much” in terms of additional protection against the spread of COVID-19, touting the effectiveness of their air filtration systems.

“The statistics, I recall, is that 99.97% of airborne pathogens are captured by the [high-efficiency particulate air] filtering system, and it's turned over every two or three minutes,” Southwest Airlines CEO Gary Kelly told the panel. “I think the case is very strong that masks don’t add much if anything in the air cabin environment.”

Days later, in a note to staff in which he also disclosed the fact that he tested positive for COVID-19, he changed his tone on mask use on flights.

“At the hearing, I confused some with a short answer to a question about masks,” Kelly wrote. “So, to be clear, I and Southwest and along with Airlines for America are all aligned and support the current federal mask mandate at airports and on airplanes. There is no effort underway to change it before it expires.”

“I think the idea of taking masks off, in my mind, is really not something we should even be considering, and that's what we meant by it depends on what the goal of getting people vaccinated before they get on a domestic flight,” Dr. Fauci said on “This Week” on Sunday.

The Biden Administration extended the mask mandate on transportation, which was enacted last year, through March 18, 2022.