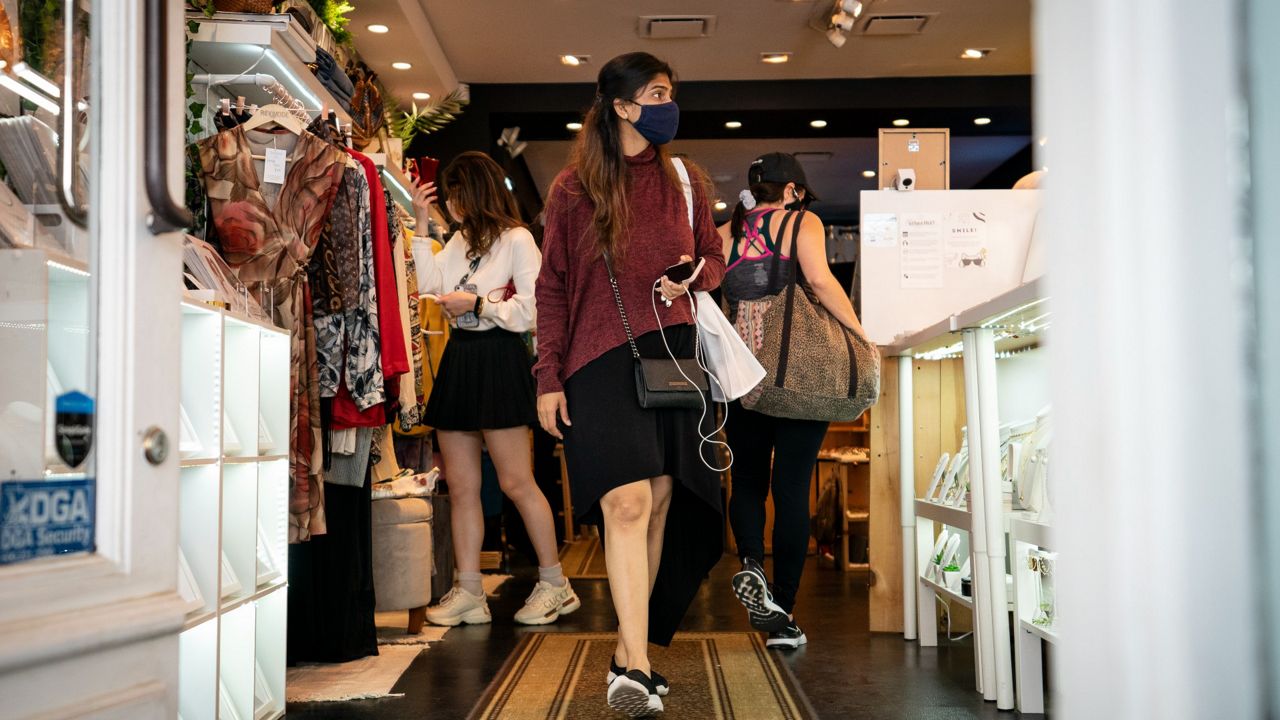 Customers wear protective masks as they browse in the retail shopping district of the SoHo neighborhood of the Manhattan borough of New York, Friday, May 14, 2021. (AP Photo/John Minchillo)

Business owners have a lot of questions this week after Gov. Kathy Hochul announced new COVID-19 restrictions in the form of a statewide mask mandate in all indoor public places, unless businesses or venues implement a vaccine requirement.

Tom Grech, president and CEO of the Queens Chamber of Commerce, which represents more than 1,300 companies, expressed both optimism and frustration at the new orders while speaking with NY1 Saturday morning.

“One of the positives is now it’s statewide,” Grech said of the mask mandate. “The city of New York, the five boroughs have not been singled out like the city has been doing, forcing our businesses to have to kind of rally because their customers were heading to the east of Long Island, to the north of Westchester, and in certain parts to the west and to the southwest to New Jersey.”

Grech pinpointed the fines businesses face if customers do not abide by Hochul’s latest mandate as potentially worrisome, though.

“The biggest problem that business groups have and that I have in particular is the fining mechanism, a $1,000 fine. It’s forcing small businesses, and large, to be the COVID police,” Grech said.

Gov. Hochul’s announcement came on the heels of Mayor Bill de Blasio’s new rule requiring all private sector employers in the city to mandate COVID-19 vaccinations for their employees.

Grech told NY1 he was taken by surprise by the mayor’s latest vaccine order, though he emphasized the need for New Yorkers to get vaccinated as soon as possible against the virus.

Looking to the new year, when Eric Adams is sworn in as the next mayor of New York City, the business leader praised the incoming mayor as someone who understands the plights of local businesses. He said Adams is ready to act on their behalf.

“If anybody gets it, it’s Mayor-elect Eric Adams,” Grech said, who is a part of Adams’ transition team. “He listens to what we want. He wants to get stuff done and he understands the perils of small businesses.”