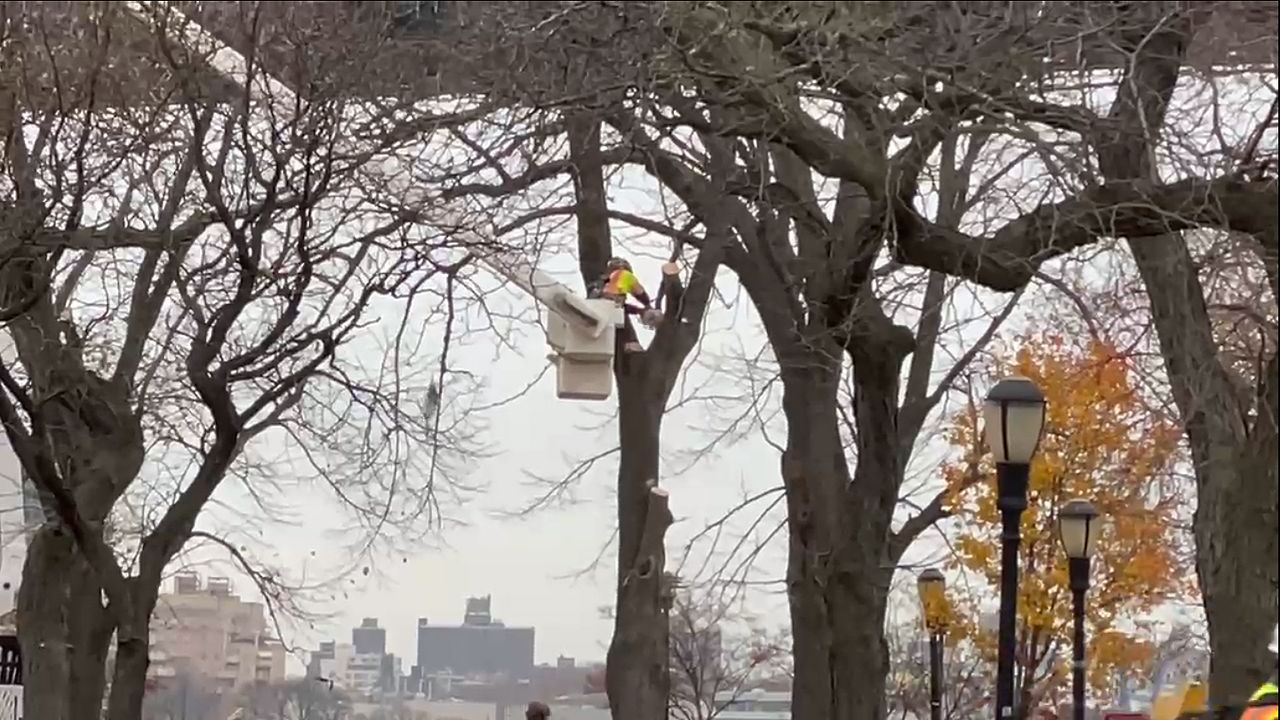 The city resumed construction Friday in their planned effort to rebuild East River Park as a coastal flood barrier two days after an appeals court judge’s new ruling in a lawsuit against the plan indicated that the city should temporarily pause all demolition efforts.

The city had paused its work after the judge’s order, after only just starting the work on Monday in the wake of months of delays to the project.

On Friday morning, activists who oppose the park plan filmed construction crews using chainsaws to remove limbs from trees. The plan requires the park to be demolished completely and rebuilt on eight feet of fill, part of a $1.45 billion effort to block flood surges on Manhattan’s east side.

Activists have sued the city over the plan, alleging the city violated state law by not seeking a vote approving the plan in the state legislature.

In a statement, the city said that the order from appeals court Judge Rowan D. Wilson on Wednesday did not amount to an order to halt work at the park pending a final ruling.

“The City has reviewed the Court’s written order and we do not believe it prevents us from continuing work on this vital resiliency project,” Ian Michaels, the head of public information for the Department of Design and Construction, which is overseeing the project, said. “The courts have already decided in our favor – twice – and we remain confident that our strong legal position will allow us to deliver the protection they deserve.”

Mayor Bill de Blasio on Friday defended the plan as one that would "protect the East Side long term," and denied that the city was going against the court's order.

"Everything happening in court, we’re honoring," he said on "The Brian Lehrer Show" on WNYC. "The city of New York is clearly following all instruction of courts."

Yet Wilson’s order on Wednesday stayed, or stopped, a ruling from a lower court in the city’s favor, which allowed work to proceed. The order had scheduled a hearing on the city’s response to the order for Dec. 20.

Arthur Schwartz, a lawyer for the group East River Park Action, said Wednesday that Wilson’s order was a requirement to stop work, amounting to the second such court order for the project, after a lower court stopped construction in early November for several weeks.

Schwartz asked the appeals judge early Friday morning to affirm that the Wednesday order does in fact prevent further demolition efforts in the park.

The city had initially scheduled the work to begin in the spring after years of planning, but legal challenges, including a lawsuit brought by a firm that lost out on the construction contract for the project, had pushed the city’s start-date back to Thanksgiving, and forced the city to revise its expected completion date from 2025 to late 2026.

Schwartz said that he does not expect a response from the appeals court as to whether the city needs to pause construction until Monday, but that he planned to file a motion to hold the city in contempt of court.